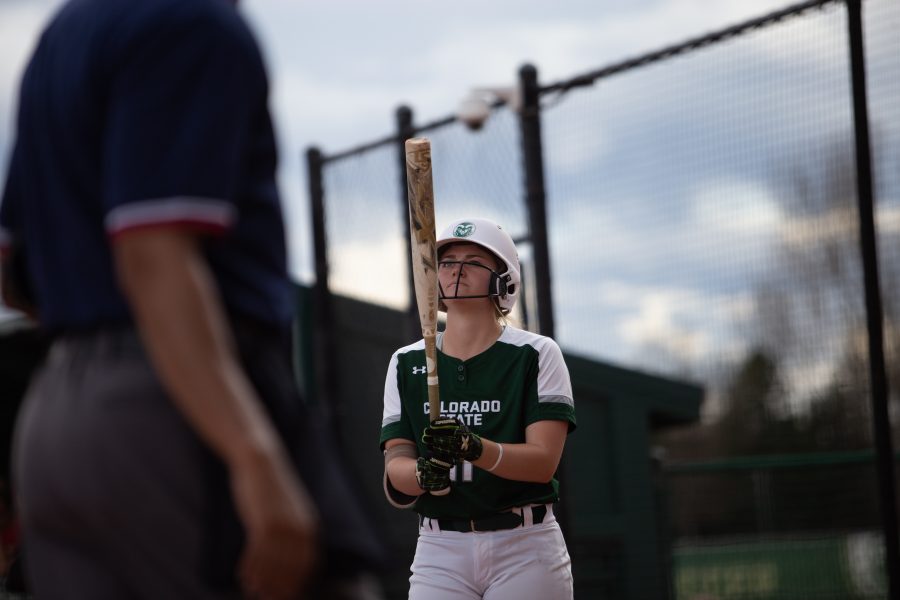 CSU outfielder Tara Shadowen prepares to come up to bat at the beginning of the third inning against the San Diego Aztecs. (Collegian File Photo)

Ending their third tournament of the year, the Rams softball team closed out the Silicon Valley Classic in San Jose, California, with a 4-1 record. Finding success this weekend, the Rams have moved up two spots in the Mountain West Conference and are now seated at No. 6.

On Feb. 13-16, CSU softball took on a tournament in Puerto Vallarta, Mexico, where the team struggled to accumulate any wins. However, the Silicon Valley Classic proved that the Rams were not ready to settle with a losing record.

“These types of weekends can happen just by the nature of the way that you schedule,” head coach Jen Fisher said after the Puerto Vallarta College Challenge. “There’s really nothing you can do about it. We have a couple more weekends and opportunities, and I think we’re ready to take them.”

The Rams struggled to get their offense rolling while south of the border, only totaling 22 hits in their five games in Puerto Vallarta. Fisher stayed optimistic throughout the tournament, and she provided insight on how the Rams had changed their approach in preparation for this tournament.

“(The girls) buckled down really hard this week in practice on offense and cleaning up our at-bats to make sure we are swinging at the pitches that we want to swing at and not just the pitcher’s pitch,” Fisher said before the tournament. “So, I feel like we’re really ready for (this tournament).”

Colorado State picked up the pace in the Silicon Valley Classic and lived up to Fisher’s optimism. In San Jose, the Rams compiled 49 hits, leaving a huge margin between last weekend’s setbacks.

The Rams faced California Baptist in a rematch from Mexico for their first game on Friday. In their last matchup, the Rams struggled to top the Lancers and fell 4-3. This time, the Rams came back and beat the Lancers 2-1 in CSU’s first walk-off victory of the 2020 season. Pitcher Taylor Gilmore earned her first win of the season in the circle for the Rams, throwing six strikeouts and only one walk.

The Rams rode the adrenaline of their game against California Baptist into their second game of the day against California Polytechnic State University. The game was tied with no runners crossing home plate until the top of the sixth inning, when Tara Shadowen was driven in by Haley Donaldson, scoring CSU’s only run against the Mustangs. Unfortunately, the Mustangs replied and put up two last-minute runs to outdo the Rams 2-1.

CSU was unfazed by their loss to Cal Poly and came back refreshed on Saturday and dominated on the field, facing the Yale Bulldogs. Colorado State jumped on the Bulldogs early, scoring their first run in the second inning.

The Bulldogs held the Rams at a one-run lead until the Rams scored again in the fifth inning. Yale managed to rack up two runs in the last two innings, but they weren’t enough to pull out a win, and Yale fell to the Rams 4-2.

The last two games of the Silicon Valley Classic were nothing short of batting practice for the Rams. CSU rolled over both the University of North Dakota and Canisius College with 8-0 on both games. Between those games, the Rams racked up an impressive 25 hits, shutting out both teams completely.

Finishing the weekend with a DUB! #WorkForOne

This tournament was a return home for some CSU players, including senior first baseman Ashley Ruiz and senior third baseman Corina Gamboa. Ruiz batted 1.000 and drove in two RBIs to close out the weekend. Gamboa hit two doubles out of her three hits and included one RBI.