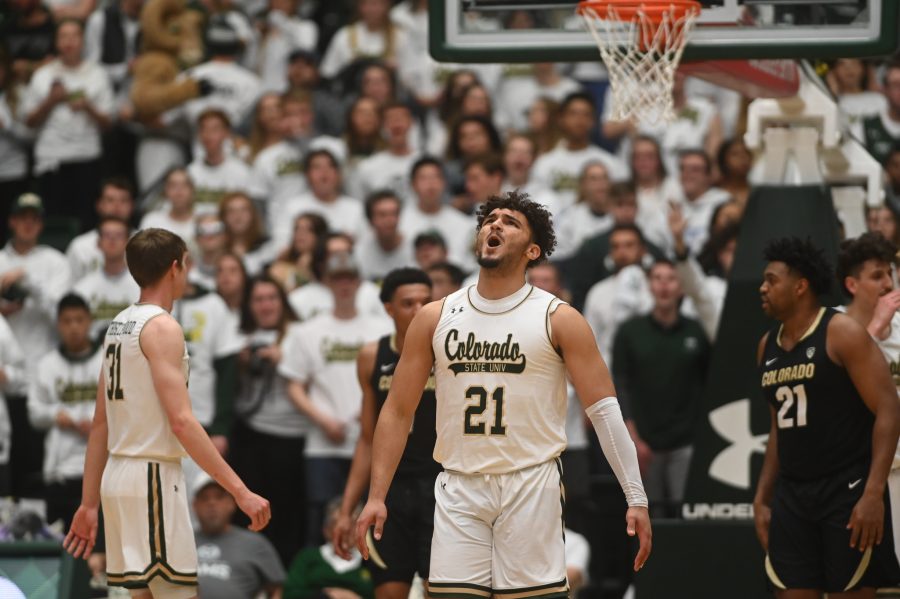 It’s still cold in Fort Collins, but the Colorado State men’s basketball team is on fire. During their Wednesday night matchup, the Rams may have had a little extra inspiration. The conference matchup played host to the Coaches vs. Cancer night, in which the names on the back of the jerseys honored cancer survivors. The Rams took on Fresno State and won decisively, 86-68 against the Bulldogs.

The Rams’ win streak is extended to five with Wednesday’s dominant performance at Moby Arena, and David Roddy was once again the big story of this game. Roddy was unstoppable, with 18 first-half points and 26 total, surpassing his career-high.

Since being inserted into the starting lineup, Roddy grows as a player with each passing game. As a player that has been dominant in the paint all season, Roddy is clearly becoming more confident in his shot.

He was 2-2 from deep, both shots which came early in the game. Roddy probably could have had more points if Fresno State didn’t start double-teaming him. But Roddy adapted by enabling his teammates to score. Roddy looked to kick the ball out to the open man in the second half. He finished with three assists and eight rebounds, an outstanding performance.

Since joining the starting lineup, Roddy has scored at least 12 points in the past six games. The CSU season has started to look more and more optimistic, and that lineup change may be looked back at as the turning point in the year.

“He is so unique, and you look at him and he is just a real matchup nightmare for people,” head coach Niko Medved said. “You can see tonight his shot is getting more comfortable, and he really works hard on it.”

The Rams have really started to find their 3-point stroke lately. In the historic performance against New Mexico where CSU had a program-record 19 3-pointers, the Rams followed up with another brilliant shooting spree. Adam Thistlewood, Kendle Moore and Kris Martin all contributed to Roddy and Isaiah Stevens’ big days from behind the arc to increase the total to nine threes for the day.

Stevens had four 3-pointers of his own and showed a willingness to pull up from anywhere at any time. His quick release can really help spread the floor for this team, which will only enhance Roddy and Nico Carvacho’s dominance down low.

Hyron Edwards had arguably his best game of the season against the Bulldogs. He provided a huge spark off the bench with nine points and three steals.

Edwards was super energetic all game and looked incredibly fast and explosive, especially in the open court. He had an arguable dunk of the year in transition, a play where he was able to demonstrate some of the highest bounces on the team. Edwards also had a leaping steal that drew a foul; he dove after a loose ball on another play in order to retain offensive possession.

In a game highlighted by the young guns, you wouldn’t expect the senior to be the glue for the team this game. It wasn’t until Edwards entered the game that the Rams were able to pull away.

“His energy is incredible — he is a little Energizer Bunny,” Thistlewood said. “He has so much grit on defense for us and he just takes our defense to a whole new level, and we feed off of that.”

This season has been filled with surprises. From Stevens being a day-one starter to the emergence of Roddy, this team continues to impress the doubters. Star center Carvacho, who led the team statistically last year and led the nation in rebounds, had a lowly three points and four rebounds for his standards. However, it appears that Carvacho and the rest of this program have bought into this system. Anyone can thrive on any given night, and everyone is willing to sacrifice for the betterment of the team.

The Rams look to extend their winning streak to six games on Saturday as they travel to Utah State. This Rams team is one of the most exciting teams in years, and they have the mindset to continue their excellence.