Moby Madness propels CSU to victory in matchup vs. Nevada 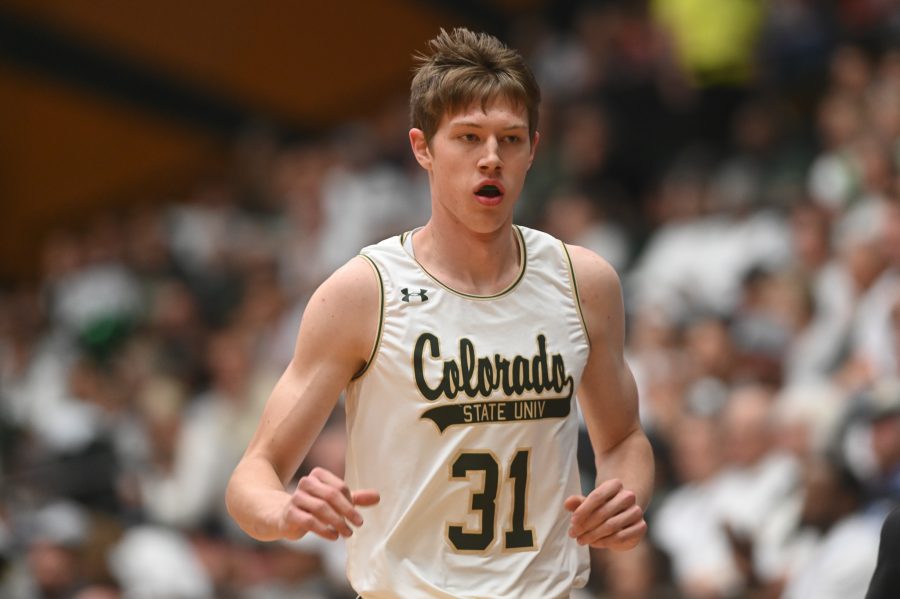 Adam Thistlewood (31) runs down court against the University of Colorado. (Luke Bourland | The Collegian)

The Colorado State Rams faced off against Nevada for the second time this year. The first time around, the Rams fell 67-61 to Nevada in Reno. However, with home-court advantage and having Adam Thistlewood and Isaiah Stevens in the lineup, CSU edged out the Wolf Pack in a high scoring 92-91 victory.

The game started off with both CSU and Nevada missing their first shots of the game. Kendle Moore got the lid off the basket as he drained a three from a nice pass from Stevens.

Nico Carvacho wasted almost no time getting Moby Arena jumping as he put his defender on a poster to go up 5-0 with 18:32 remaining in the half. Stevens again found the open man as he grabbed his second assist. It was obvious from Carvacho’s dunk that he was feeling it in the first half. Carvacho proceeded to get to the charity stripe two times in the first four minutes of the first half, knocking down two of four.

Both teams would match each other throughout the first half. Both would struggle to get the ball through the hoop, but when someone scored, a lot more followed. At the 15:48 mark, Jalen Harris hit a mid-range shot to put the score at 9-6. The next score came nearly a minute later (14:50) from K.J. Hymes, and both teams took off. Carvacho finished the first half with dominant numbers. He went to the locker room with a near double-double: 12 points, eight rebounds and two assists (4-7 from the field, 4-8 from the free-throw line).

“Carvacho was awesome early in the game,” head coach Niko Medved said. “I thought he was playing aggressive. His energy was great.”

Three-pointers were big for both teams in the first half. CSU went 5-11, and Nevada went 8-18. From the 13:35 mark, the Rams hit three from behind the arc, and the Wolf Pack answered, making three on their next possession.

Roddy had a huge block at the two minute mark. Then Thistlewood hit the corner three to put the Rams within one point (85-84). The Rams went on a run down the stretch to take an 89-85 lead with 23.4 seconds left, mostly because Roddy has the ability to bully everyone in the paint and can grab the ball out of mid-air.

Nevada’s leading scorer, Harris, hits two crowd silencers with less than four minutes remaining. The Wolf Pack had a 91-90 lead with only seconds left, but Stevens took control. He took the ball up the court, crossed his defender and hit a mid-range buzzer-beater to give CSU the win 92-91.

“From the timeout, coach Medved told me that I had more than enough time with 5.3 to get down the court and to not rush myself and let it come to me and see what develops in front of me and go make a play,” Stevens said.

Even with Thistlewood doing most of the damage for the Rams, he had high praise for his clutch teammate.

“He’s a walking bucket; that’s all I have to say,” Thistlewood said. “It’s amazing to see such a young player be this great and this good early in his career. He’s just going to keep going from there.”

CSU will return to Moby this Saturday against the University of Nevada, Las Vegas Rebels at 2 p.m. in an Orange Out.