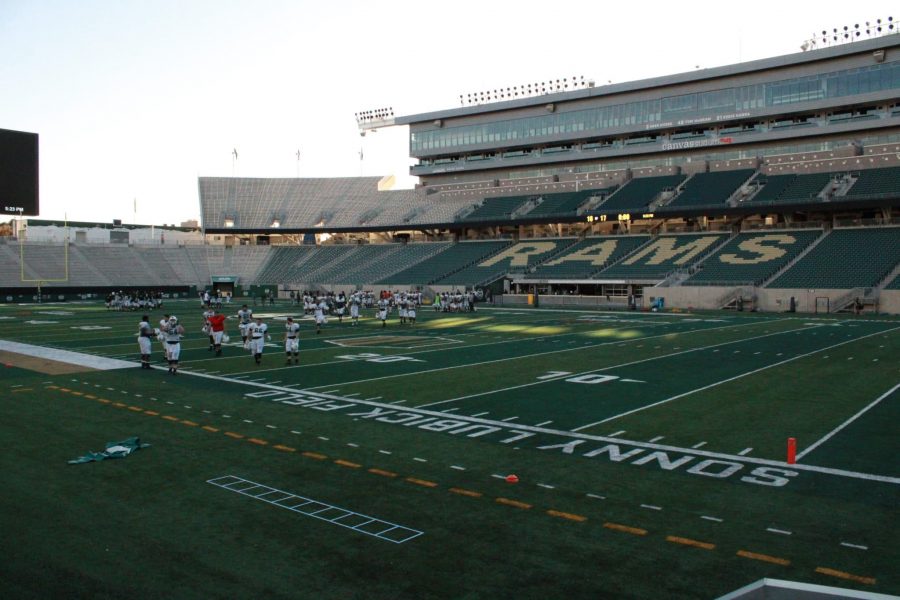 As the Colorado State University Rams football team finishes up practice on October 16th, the sun goes down perfectly behind Canvas Stadium. (Asia Kalcevic | The Collegian)

Early this month, the Mountain West Conference announced a new media rights deal split between the television networks Fox and CBS. The deal has numerous implications for the conference as a whole and our Colorado State Rams; here’s what the agreement means for CSU and the MW.

The six-year, $270 million deal will be put into effect July 1, 2020. Aside from the major increase in money paid to each school, the largest difference between the new agreement and the former deal is that Mountain West football/basketball games will no longer be aired on ESPN.

Games will now be broadcasted on Fox proper, Fox Sports 1, CBS proper and CBSSN. Additional online streaming can be found on the CBS All Access streaming network. Both Fox/FS1 and CBS will air up to 23 football games and 32 men’s basketball games.

The potential impact of the new media deal on both CSU and the Mountain West Conference is seen through three areas of analysis. The first is the financial benefit for each member of the conference.

Under the previous media rights deal, each member of the Mountain West Conference (aside from Hawaii and Boise State) was being paid $1.1 million annually. This figure will now increase to $4.09 million per year under the new agreement.

Hawaii has a separate media rights deal with local island media outlets and therefore is subject to different payouts than other conference members. Boise State, on the other hand, has contractual permission to negotiate independent media deals regarding their home football games and has done so with Fox.

It is important to note that this media agreement is the last in which Boise will be awarded this luxury given that the only reason they were given this ability was to ensure that they stayed with the Mountain West rather than leaving for the Big East.

The ending of Boise State’s ability to negotiate their own media deals for home football games could potentially trigger the biggest effect of the new media rights deal: Boise State’s exit from the Mountain West Conference.

A potential Boise State exit would be bittersweet for CSU and the rest of the Mountain West Conference in the sense that the conference would lose its biggest national “attraction,” but it would also open the doors for a more competitive conference, specifically in the Mountain West division.

In fact, in the time CSU and Boise State have been in the Mountain West Conference, our beloved Rams have never beaten the Broncos on the gridiron, with the current head-to-head record sitting at an abysmal 0-9. Taking this unfortunate history into account, CSU can undoubtedly benefit from a Boise State exit.

The final area affected by the new media deal is the kickoff/tipoff times of football and basketball games throughout their respective seasons. This is a particularly contentious area of discussion between the University directors and the media outlets due to time zone discrepancies caused by the number of West Coast teams in the conference.

The media outlets would prefer late start times for both football and basketball games to ensure maximum viewer potential, but late start times could decrease the number of fans filling up the stadiums here.

In an effort to compromise, the two parties decided that no football game will have a kickoff later than 8 p.m. However, basketball tipoff times may still be as late as 9 p.m. An additional agreement made regarding kickoff times determined there will be 10 Friday night games aired between the two networks.

Holistically, the new media rights deal is undoubtedly an upgrade from the previous agreement, but it is also clear that the Mountain West still has a long way to go if they hope to reach the level of other conferences around the country. As far as potential ramifications such as a Boise State exit, all the rest of the conference can do is sit back and wait.