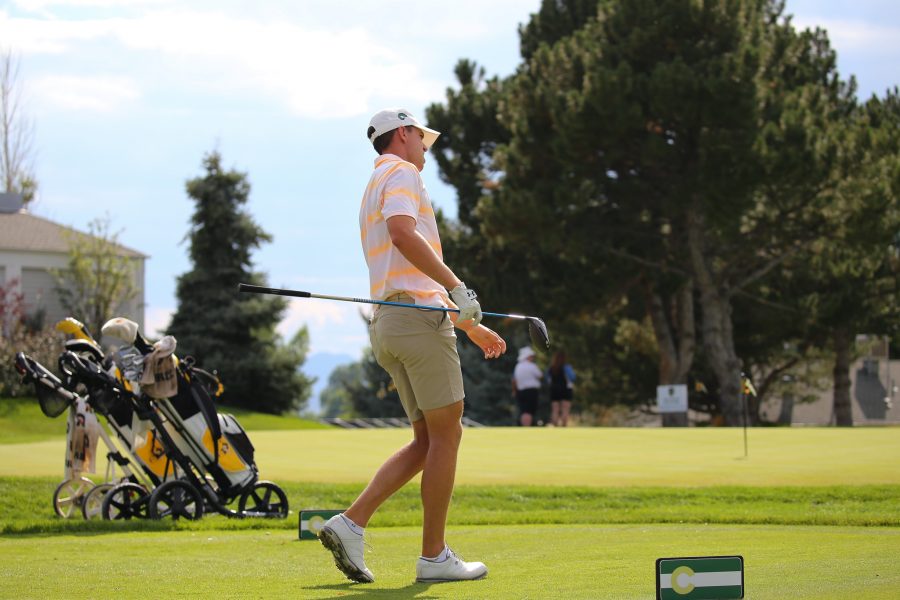 Situated in one of the most successful seasons Colorado State University golf has seen recently is senior golfer AJ Ott. But current success isn’t enough to satisfy him.

“This early, the rankings don’t matter. We just have to play good golf later in the season,” Ott said. He believes that the Rams still have room to grow and is not intimidated by the team’s dominance.

A statement like this is pretty typical for Ott; the fourth-year finance student personifies all the adjectives to describe a great athlete, as he’s motivated, gritty, ambitious and confident but humble.

“He was a great leader by example — not just during competition, but in practice; he just hated to lose, even in PE class,” said Fort Collins High head golf coach Kyle Tregoning. “Whatever he sets his mind to, he’s going to do it.”

The general consensus is that Ott is no slouch.

He had a club in his hands by the time he was 5 years old. He was chipping Wiffle balls in his front yard when he was 8. By middle school, he was shooting lower rounds than his father and grandfather.

Ott has found success at every level of golf. As a 15-year-old high school junior, he was already one of the top-ranked junior amateurs in the state. In that same season, he finished 13th at the 2015 Big I National Championship, posting a 72-hole score of 296 (78-72-74-72) in the prestigious tournament.

As a high school senior, he won the 2016 Colorado Junior PGA Championship and found himself the 43rd-ranked golfer in the class of 2016 nationally and the top player in the state per the National Junior Golf Scoreboard. This was all before he had signed his letter of commitment to CSU.

When he made the decision to take the leap from Fort Collins High to Colorado State, it was clear from the jump that Ott would make great use of his time as a Ram.

He’s performed in every tournament he’s been eligible for, even in his freshman campaign. While that freshman season wasn’t his strongest, Ott grew into the game during his second and third seasons with the Rams golf team.

“I struggled that year, but I got in the lineup,” Ott said, remarking on his first year at CSU. “It was good experience.”

In his sophomore season, Ott led the team in average strokes per round, with an impressive mark of 71.67 strokes through 33 rounds. Ott earned All-Mountain West team honors — an impressive feat to accomplish, especially after starting the season unranked in the World Amateur Golf Rankings. But by the end of the season, Ott had jumped to 290th.

Ott improves every year, refusing to let his skills plateau. Ott’s junior campaign was even more successful than his fiery sophomore year. Junior season was the season in which he’d earn the Les Fowler Player of the Year award, an annual award given to the top amateur golfer in the state of Colorado. Ott had four top 10 finishes in collegiate play and dominated the Southwestern Amateur tournament.

The Rams are in the middle of their most successful season in program history. The team currently holds their highest ever ranking in Golfstat’s national rankings at No. 5, with Ott holding strong in the team standings.

When it comes to what motivates Ott, you’ll find his drive is nothing more than pure love for the sport.

“I love competing,” Ott said. “I’ve always loved competition. It’s what we are after here at the college level.”

Ott is a local product through and through. Born and raised in Fort Collins, he tore up local competition in his four years on the Fort Collins High School varsity roster.

“You could tell he was talented right away,” Tregoning said. “He was such a hard worker too. He would work through our high school practices and then go hit balls somewhere else afterwards.”

Ott acknowledged that it took some support from the Fort Collins golf community to get him to where he is.

“I started playing at, like, Collindale (Golf Course) and Southridge (Golf Course) when I was younger, but when my family joined Ptarmigan (Country Club), I could start going whenever,” Ott said. “It’s easy at a club like that to shoo away kids, but they always let me practice and were really respectful.”

To buff his credentials as a true Colorado native, it’s worth mentioning that Ott is an avid outdoorsman. In his free time he likes to hit the slopes and fly-fish.

“I would hang my clubs up for four months every season just to ski,” Ott said. “Obviously I can’t go up as much now, but I still try. Anything outdoors really is fun to me.”

Ott’s time at CSU is coming to a close. Over his four years at CSU, his commitment to the program is unmatched. Ott says he’s made some of his closest friends here, and the friendships he’s built here have been what he’ll remember best.

“We always have a really tight group,” Ott said. “We’ve got guys from all over the place, but everyone is really close.”

Ott’s golf aspirations don’t end at the collegiate level. Everyone should expect to see Ott vying for a spot on professional tours following his graduation in the spring.

“I’d like to try to play PGA (Tour) Canada … or the Korn Ferry Tour next fall if I can,” Ott said.

If he doesn’t go on to find success professionally, he’ll be happy to fall back on the finance degree he’s worked hard for.

Assuringly, Ott is focused on the rest of this collegiate season.

“We’ve got a lot of events left,” Ott said. “It’s been fun, and we have a lot of experience. We know what we’re capable of now.”

The Rams are heading into the winter play break with strong aspirations for the rest of the season.

“We have the chance to play a lot of good teams now,” Ott said. “It’d be a lot of fun to make a regional berth and then maybe a NCAA tournament appearance.”

The Rams are scheduled to play next at the Wyoming Desert Intercollegiate in February. CSU golf will look to capture their first victory of 2020 when they head to the Classic Club in Palm Desert, California, a tournament the team finished fifth in last season.

Matt Davis can be reached at sports@collegian.com or on Twitter @MattDavis27.