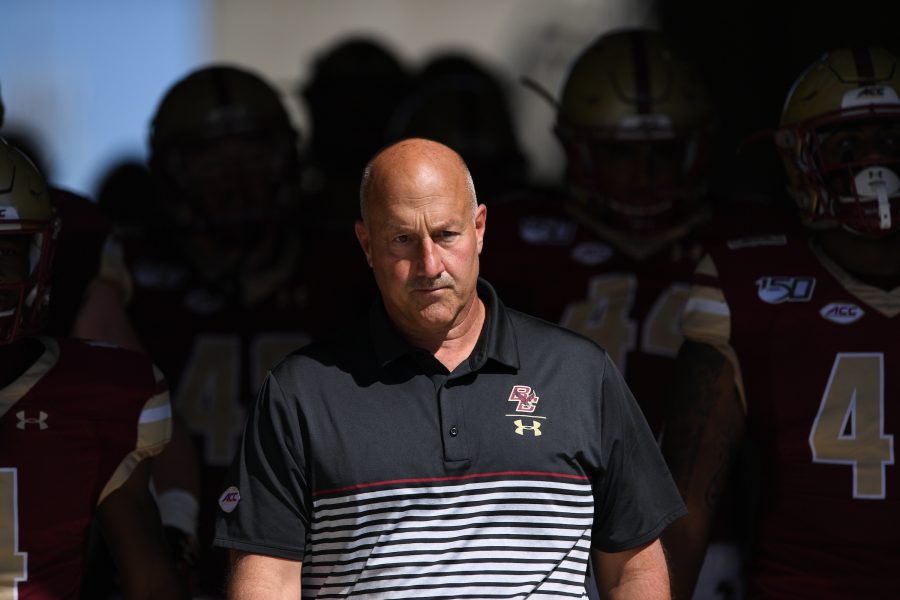 When the announcement came that Colorado State football would be moving on from Mike Bobo, it wasn’t a surprise; the former Georgia offensive coordinator had propelled the Rams to just seven wins over his last two seasons. However, the real surprise is who the Rams appointed as their 23rd coach in program history: former Boston College head coach Steve Addazio.

“I would like to thank President Joyce McConnell and Director of Athletics Joe Parker for the opportunity to lead this football program,” Addazio said. “Colorado State University is a world-class institution, and Fort Collins is an incredible city to live in and to be able to recruit to. Our program will be one built on toughness and passion, and we will work tirelessly to develop men of character to return championship-level football back to Colorado State.”

During the coaching search, Parker stressed the importance of prior head coaching experience for his candidates, and with the assistance of Urban Meyer, Parker has found his man.

“I am excited to welcome Steve Addazio as our new head football coach and his wife, Kathy, to Fort Collins and Colorado State University,” Parker said. “Throughout his career, coach Addazio has been committed to the holistic development of student-athletes and of the programs he has led. He has focused on crafting cultures where his students thrive on the field and in the classroom. We look forward to coach Addazio leading our football team as we strive to be the preeminent program in the Mountain West.”

Parker also stated the University would not hire a search firm to assist in a coaching search. Meyer served as a consultant for CSU in the search.

Addazio is a product of Meyer’s coaching tree, having served on his staff from 2005-10 at the University of Florida as a tight ends coach from 2005-06, assistant head coach/offensive line coach from 2006-07 and the additional role of offensive coordinator from 2009-10.

Addazio inked a five-year contract that rewards a base salary of $1.5 million in the first year with a $50,000 increase each year of the contract. There is also a guaranteed portion of the contract by the Rams: Addazio has a buyout if he chooses to leave. Addazio and the University are finalizing the remaining terms of the deal, but it will be available when completed and signed.

“Steve Addazio is a great recruiter, a better coach, an even better leader and most importantly, a better person. I am very excited for the Colorado State family and the future of Ram football.” –Former Boston College Athletic Director Brad Bates

Like Bobo, it didn’t take Addazio long to find a new job. The former BC play-caller was fired by the Eagles at the beginning of December before being named the next coach of CSU football. After his firing, several of the Eagles’ former players that played under Addazio have come out of the woodwork and voiced their criticism of their former coach.

Former NFL linebacker Josh Keyes, who played under Addazio at BC in 2013 and 2014, voiced his criticism of his former coach via social media about events that transpired after Keyes made a critical comment of Addazio’s coaching ability in a post on Facebook.

THE FULL STORY.
WHY I WAS BANNED BY STEVE ADDAZIO pic.twitter.com/Y9VJzR2fSt

There are always two sides to a story; Keyes presented his, and Addazio hasn’t commented on the events. Here are some interesting football-related stats about Addazio that Rams fans might want to know.

Finished at Boston College with a record of 44-44 from 2013-19
Before BC, Addazio was the head coach at Temple from 2011-12
Got his start as an offensive line and tight ends coach
His Eagles teams had strong offensive lines and a sound running game
Record by season at BC:

A strong recruiter in his own right, Addazio will have no rest period as the new coach of CSU football. Addazio will need to get to work on the recruiting cycle with the National Signing Day approaching on Feb. 5, 2020.

One place he might want to start is at the quarterback position, as Rams commit Griffin Brewster announced earlier today that he would be reopening his recruitment.

Unlike Bobo, Addazio isn’t a QB whisperer. He was revered during his BC tenure for his durable offensive lines and sound running game, meaning a new style on the offense may be in store for next season.

With the Addazio era now underway, the Rams will look to bounce back from a lowly 4-8 season as the real work begins.

Addazio will be introduced to Colorado State in a public press conference at 3 p.m. on Thursday, Dec. 12, inside the Hall of Champions at Canvas Stadium.