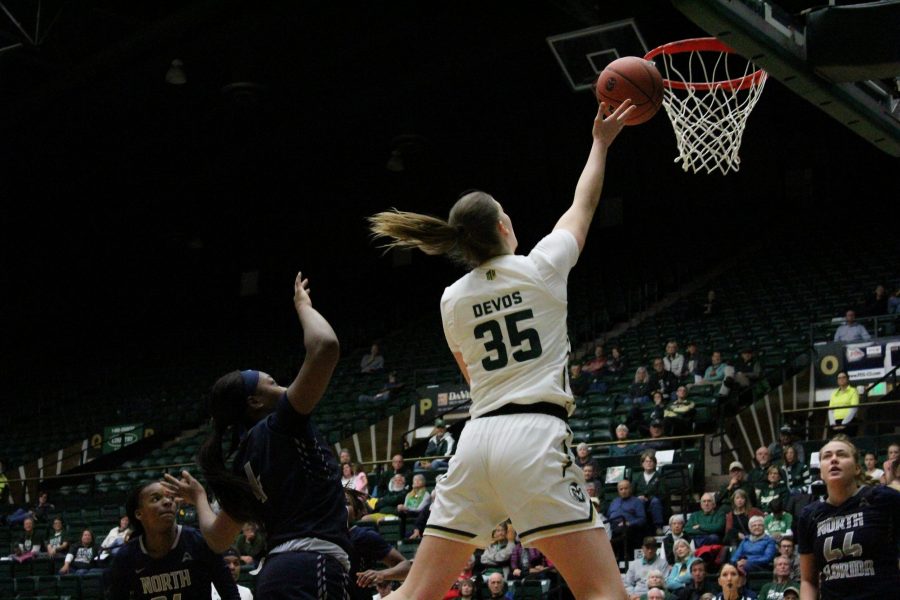 Lore Devos makes a layup during a game against the University of North Florida Ospreys on Dec. 2. (Susie Heath | Collegian)

There are close wins, good wins and hard-fought wins. And then there is the Colorado State women’s basketball season opener on Tuesday afternoon. The Rams kicked off their season on a high note by blowing the roof off Moby Arena with a 102-51 victory over the Chadron State Eagles.

The average score in a college game is around 60-70 points, but the Rams offense exploded with 102 points, matching their record for a season opener originally set in the 2001-02 season.

Students of the Poudre School District were treated to a historic night from the Rams. The attendance for the game encompassed over 3,500 fans, and spectators brought the noise for their home team. The fans were so loud that they caused some miscommunication between the Rams and Head Coach Ryun Williams.

“There were some miscommunications; there were some times when the kids could not hear me on the other end,” Williams said. “That’s probably when we played our best basketball, is when they weren’t listening to me. They were loud.”

The ladies controlled both ends of the court, holding the Eagles to a minuscule 17 points at the end of the first half while heading to the locker room with a 41 point lead, up 58-17.

“I thought we started really well,” Williams said. “That start was as good a start as we’ve had in quite a while here. It was fun to see the kids loosen up and play good basketball today.”

Freshman Katia Stamatelopoulos had a solid game on both sides of the court. Coming off the bench, the 5-foot-8-inch guard’s stat line was impressive. Stamatelopoulos finished with 10 points, five assists and no turnovers in 16 minutes of play while leading the team with three steals. Her defense was impressive in the Rams’ first regular season game, and the freshman will likely be a contributor when helping the Rams clog passing lanes.

“Defense wins games, so I think that’s really what got us over the line in the end,” Stamatelopoulos said. “We just need to lock down a few things, and we’ll be really good.”

CSU got balanced scoring with their starters and their bench. The Rams had five players finish with double digits in points.

Annie Brady, Lore Devos and Liah Davis finished with 12 points each while Jamie Bonnarens and Stamatelopoulos added 10 points. As a team, the Rams shot an impressive 54.5% from the field, going 36-66, and they were solid from beyond the arc, going 12-25 for 48%.

The Rams will be back in action this Friday as they travel to Greeley, Colorado, to take on the University of Northern Colorado before returning to Moby on Sunday to take on Western Colorado.