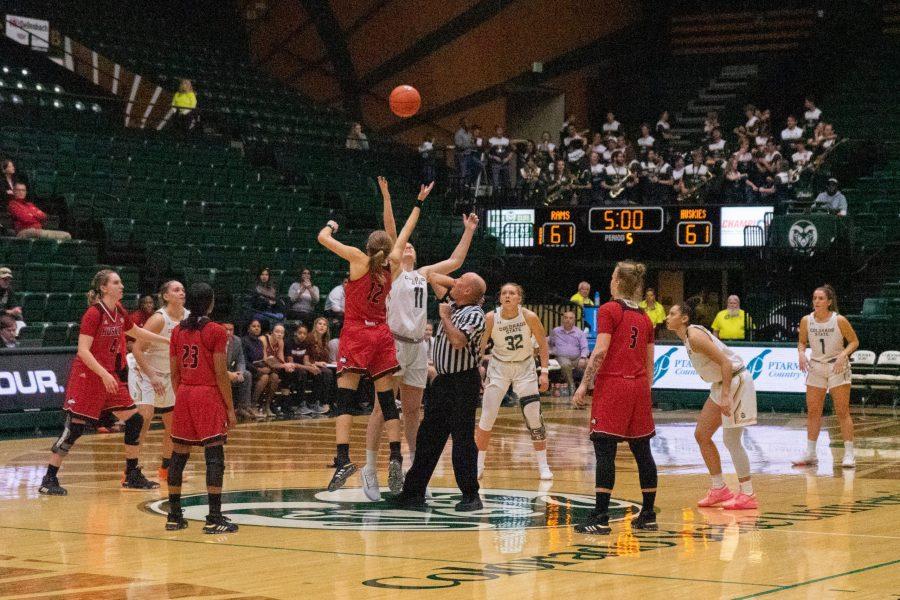 The Colorado State women’s basketball team looked to defend their perfect 3-0 home start at Moby Arena on Sunday, Nov. 17 against the visiting University of Northern Illinois. The Rams fought hard, but offensive struggles and a resurgent Huskies effort in the second half would lead to a 80-75 loss for CSU.

The Rams’ had a cold start to the game, failing to score on their first three attempts before sophomore guard Tori Williams drained her first shot from deep to open the scoring for CSU. The Huskies managed to string together some impressive offensive possessions to take an early 12-5 lead in the first.

The Rams quickly found their feet again, led by Makenzie Ellis’ team-high six first quarter points, while Tori Williams facilitated the offense, creating good chances for her teammates. Tori Williams collected three assists in the first quarter to give the Rams a 16-14 lead going into the second quarter.

CSU played with intent during the second quarter. In the first possession of the quarter, junior center Liah Davis defended the rim with a commanding block to deny the Huskies’ A’Jah Davis, which released Tori Williams. Tori Williams was able to find Megan Jacobs for three points.

The Rams kept finding ways to score in the second, scoring 18 points in the quarter, while keeping the Huskies to only 10 points off of 5-19 (26.3%) shooting from the field to take a 34-24 lead into halftime.

Notable performances in the first half included CSU’s Ellis and fellow forward Jamie Bonnarens, who combined for 18 first-half points with nine each, while Ellis also collected a team-high seven rebounds in the half. Tori Williams was pulling the strings, contributing six first-half assists and six points of her own. Northern Illinois junior forward Riley Blackwell led the visiting team in first-half scoring with eight points off an impressive 4-5 (80%) shooting.

CSU almost looked like a completely different team once the second half was underway. The offense couldn’t get anything going, shooting 2-12 (16.7%) from the field in the third, scoring only eight points in the quarter. The Huskies took advantage of the poor offensive performance and poured in 23 third quarter points of their own off of 8-19 (42.1%) shooting, including an impressive conversion rate from 3-point range, sinking 4-7 (57.1%) of their deep shots to recapture the lead 47-42.

Offensive struggles would continue to trouble the Rams in the final quarter of play. Tori Williams remained reliable, scoring nine points in the fourth quarter, while Blackwell continued to lead the Huskies’ resistance, finishing with 16 points off of 7-10 (70%) shooting. Her individual performance would keep the scores level at 61-61, sending the game to overtime.

CSU took an early 63-61 lead in OT after Tori Williams opened the scoring by making both of her free throws. Both teams worked hard to produce chances, but Northern Illinois guards Gabby Nikitinaite and Courtney Woods combined for 13 points in overtime to force the Rams’ second loss of the season, with a final score of 75-80.

You can attribute this loss to the Rams’ lack of attention to the small but crucial details. Northern Illinois out-rebounded the Rams 60-41 in the game while CSU shot an extremely disappointing 8-16 (50%) from the foul line.

“The little things come back to haunt you,” Head Coach Ryun Williams said after the game. “We made too many mistakes in those areas tonight.”

However, that doesn’t mean this team can’t or hasn’t been improving.

“We didn’t shoot the ball well but still put ourselves in a position to win,” Ryun Williams said. “Our kids have fight; they’re tough. But now we need to start doing things that help you win games.”

After their first home loss of the season, the Rams’ record falls to 3-2. The Rams will have five days to prepare for their next game on Friday, Nov. 22 against rival school the University of Colorado Boulder for what is sure to be a rowdy night at Moby.