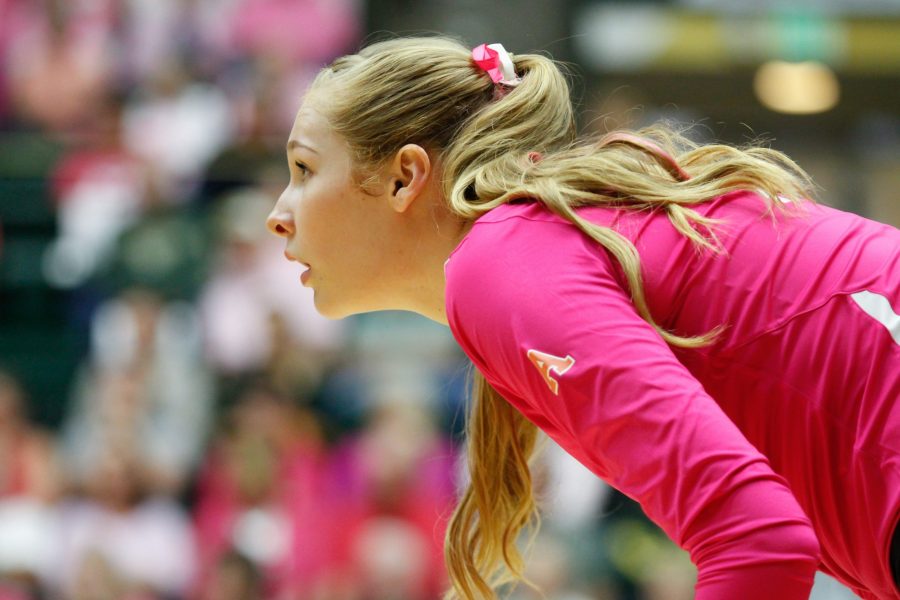 Kirstie HIllyer waits for the serve during the game against Fresno State Oct. 27. (Ashley Potts | Collegian)

A great team is no better than the sum of its parts; Colorado State University volleyball is no different. The Rams are nationally ranked No. 13, and nobody can find a way to stop them. With a 23-game win streak, both offense and defense have come easily for the Rams. But somebody has to be working the middle, and for the Rams, it’s Kirstie Hillyer. Hillyer has been a key piece for the Rams on both sides of the ball, ranking in the top 10 in points scored and blocks in the conference.

Hillyer has been stellar this season for CSU, receiving Mountain West Volleyball Offensive Player of the Week for the first time this season for her performances from Oct. 7-13. CSU went 2-0 that weekend, with two sweeps over conference foes San Diego State and Fresno State.

Coach Tom Hilbert believes that a lot of Hillyer’s achievements come from her use of CSU’s athletic training programs.

“One of the best things that happened to her in this program is that she’s really embraced the weight room and the strength side of things,” Hilbert said in an interview with Volleyball Magazine. “She has a great arm, and she developed a lot more fluidity as an athlete.”

Ever since Hillyer joined CSU, she has been inspiring fans and teammates with her abilities.

Hillyer reached an impressive milestone this year: 1,000 career kills as a CSU Ram. Hillyer’s accomplishment came during a win against Fresno State, five days after she recorded her 500th career block against the Air Force Academy.

Honestly, I had no idea going into this season that I can even achieve that goal. Once it happened, it was quite surreal. It was a surreal feeling to know that I could do that. Knowing that I am the fourth player at CSU ever to do that.” -Kirstie Hillyer.

There are extra responsibilities that come with being a student-athlete, and Hillyer can attest to this.

“There are a lot of difficult aspects of being an athlete,” Hillyer said. “There is traveling, missing class, getting up early; we practice when normal people do not have practice. People in your classes or group projects or outside of it know that you are busy all of the time.”

But for right now, Hillyer’s main focus is going pro after graduation.

“The plan right now is to see if the USA national team contacts me to come practice with them in the spring season,” Hillyer said. “That would be super cool. If that does not work out, I would go overseas and play half (of) a season.”

Hillyer credits her individual success to her teammates and their bond that they share both on and off the court.

Katie Oleksak, a teammate and fellow senior, agrees with Hillyer that this team has a special bond. Oleksak thinks that Hillyer excites the team, leading other players to leave all they have on the court.

“She is very vocal,” Oleksak said. “Many times, she knows what to say, and she will say stuff in the huddle, or she knows how to get people (riled) up. Also, she does our cheers. After timeouts, she is the one to start the cheer, and that is just a routine. I think she is a good vocal leader.”

Jessica Jackson, also a redshirt senior, admits that Hillyer has a special place in her heart. Jackson considers her to be her best friend and has nothing but great things to say about the Rams’ offensive superstar.

“She has been my roommate for five years,” Jackson said. “We went to Europe together, and we roomed there. Honestly, she is like my side piece. Love her to death. I could not live without her. I am going to be completely honest, and every time I talk about her, I start crying because I don’t know what I’m going to do without her. We are not going to live together, and I do not know how to live without Kirstie (Hillyer).”

Hillyer is the heartbeat of this senior-laden CSU squad and has been a key contributor for the Rams this season. The Rams are on pace to capture their third straight Mountain West title and appear in their 25th consecutive NCAA tournament.

Angel Cooper can be reached at sports@collegian.com or on Twitter @angelcooper05.