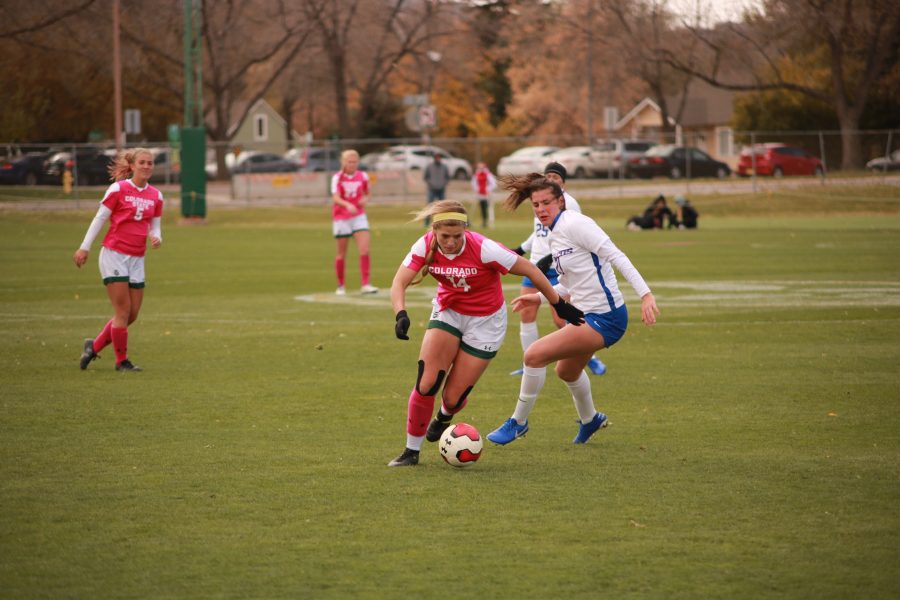 The Colorado State women’s soccer team’s record-breaking season has come to an end. The Rams’ first-ever conference tournament appearance ended in a 0-0 draw, followed by a 3-1 loss in a penalty shootout against Fresno State on Tuesday, Nov. 5.

The defense was the story early on in Boise, Idaho. CSU forward Gracie Armstrong forced a save from Valentina Vivas in the first 30 seconds of play. Both teams dug deep to prevent each other from creating scoring chances; the Rams only hit the net one more time in the first half, while the Bulldogs only managed one shot on goal.

Chances were more fruitful in the second half. The Rams managed to create nine shots, finding the target four times, while the Bulldogs forced Gabi McDonald into two saves from seven shots. But again, neither defense allowed the opposition to put the ball in the net.

The Rams came closest to scoring in the 73rd minute of play when senior midfielder Caeley Lordemann rifled a shot goalward but was denied by the crossbar. In a fashion typical of this Rams team this season, they upped the pressure in the last moments of the game, forcing Fresno goalkeeper Milena Zink to make three important saves in the last 15 minutes of play to send the game to overtime.

The Rams didn’t create a chance for themselves in the first period of overtime, but sophomore goalkeeper McDonald made a crucial save in the last three seconds of play to deny Lorena Montanes and keep CSU’s season alive. The story didn’t change in the second period of overtime, and the game went to a penalty shootout.

Senior Fresno forward Kasidee Wiley shot first, beating McDonald to give the Bulldogs a 1-0 shootout advantage. The Rams missed their first two attempts in the shootout and were only able to stop Audrey Reyna from scoring. The Bulldogs prevailed in the shootout, winning 3-1 to send the Rams home.

“When you go to PKs, it is anyone’s game,” CSU Head Coach Bill Hempen said. “We showed our inexperience in a situation like that. You can practice that all you want, but it’s not until you have to do it with the season on the line that it turns into a whole different animal.”

“There were a lot of positives to build on not only in this game, but throughout the season to carry over into next season,” Hempen said in regards to what the future has in store for Rams soccer.