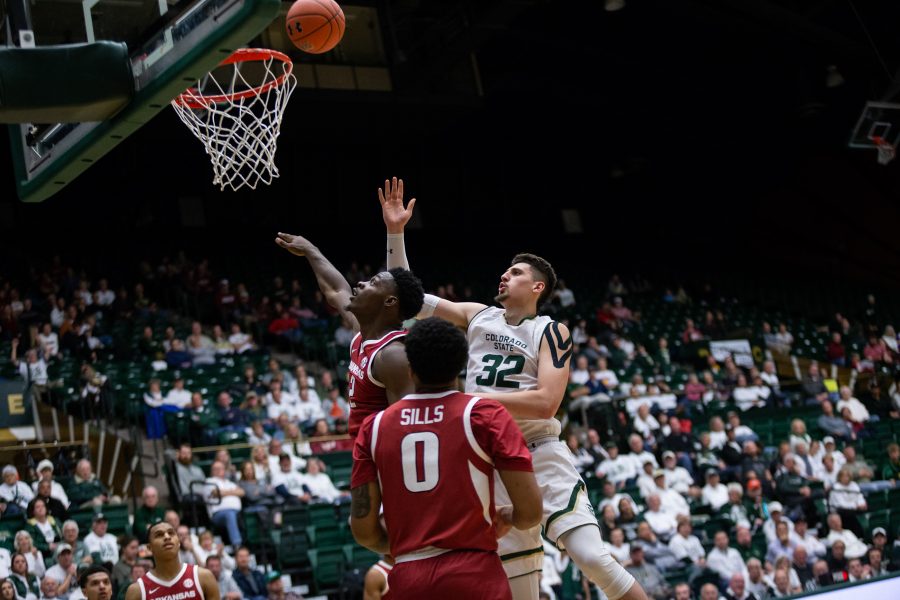 Nico Carvacho (32) tries for the rebound against two Razorback players during the wednesday game. The game, held on December 5, 2018 saw the sixth straight win for the Razorbacks. (Josh Schroeder | Collegian)

The Rams have a tough road ahead of them, but maybe traveling 2,000 miles away from Fort Collins after blowing a 17-point lead to Arkansas State is exactly what they need.

On Wednesday, CSU had a commanding 17-point lead with 16:22 remaining in the second half. When the game clock hit double zeros, the Red Wolves were up by two and won the game 80-78. The Rams did not have trouble scoring the ball, as five players had double digits figures in the point column.

This tough loss shadowed a historic night for center Nico Carvacho. Carvacho joined a prestigious group with 1,000 career points and 1,000 career rebounds. This group features some names you might have heard of, including Tim Duncan, Bill Walton, Shaquille O’Neal and Patrick Ewing.

The Rams’ first game will be against the New Mexico State Aggies on Monday. The Aggies are fresh off a dominant 2018-19 campaign. New Mexico State went 30-5 and lost to No. 5 Auburn (78-77) in the first round of the NCAA tournament. Currently, the Aggies are 2-3 and are having a slow start to the season.

After New Mexico State, the Rams will take on either Loyola Chicago or South Florida. Loyola Chicago sits at 3-2 heading into the tournament. Leading scorer Cameron Krutwig is averaging 16.6 points a game and has 83 points total.

After Loyola Chicago or South Florida, the slate opens up, and the Rams could potentially face Washington State, Nebraska, Old Dominion or George Mason.

Nebraska is 2-2 and has already gone to overtime in two of their games. Against Southern Utah, the Huskers fought for two overtimes before losing 79-78, and in their game against Southern University and A&M College, it took one overtime to win 93-86.

This tournament will be a test for the Rams, as they play a tough schedule. If CSU can come out of the Cayman Classic with a winning record, or even tightly contested matchups, it will likely give them momentum for the final stretch of non-conference matchups.