Men’s basketball is back home for match with Arkansas State 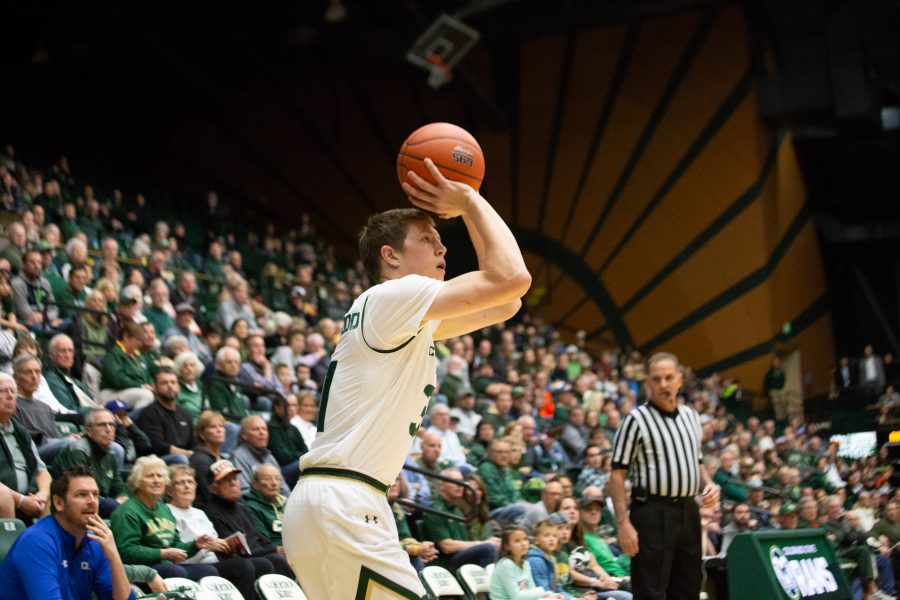 CSU forward Adam Thistlewood shoots from the corner of the court during the game against Southern Illinois Salukis on Tuesday, November 27, 2018. The final score on the game saw a CSU loss 82-67. (Josh Schroeder | Collegian)

The Colorado State Rams men’s basketball team will look to improve on their inconsistent shooting and 2-0 home record against the Arkansas State Red Wolves on Wednesday.

The Rams are coming off an emphatic 74-64 win against Loyola Marymount on Saturday. Isaiah Stevens proved why he should be starting; he is leading the Rams in scoring with 21 points on 5-8 shooting, 2-4 from three and 9-10 on free throws. He was able to crash the boards, obtaining five rebounds.

CSU is still trying to figure out their shooting in the early season. Four games into the 2019 campaign, the Rams are shooting 42.3% from the field and 33.3% from three.

The Rams are outscoring their opponents 283-281. The game against No. 1 Duke hampered that statistic, but the Rams have won their other three games by 10 or more points. Without the blowout loss to No.1 Duke, their differential is 228-192.

Arkansas State has turned the ball over 71 times and averages 14.2 turnovers a game. While the Red Wolves have played one more game than the Rams, they have turned the ball over 16 more times (the Rams have 55 turnovers and average 13.8 per game). CSU — who is averaging five steals a game — will likely look to expose the turnover problems to create more fast-break opportunities and shots.

Seasoned center Nico Carvacho and the Rams rebounding will have to work hard on the glass against the Red Wolves, who are averaging 33.4 rebounds a game. Still, the Rams average more rebounds a game with 36. Offensive and defensive rebounds will be key for both teams when it comes to controlling possession. Carvacho is the obvious dominant rebounder for the Rams. He has 46 boards on the season, which is nearly 20 more than the next closest player, Adam Thistlewood, with 27.

Carvacho also leads the Rams in scoring with 59 points, and Stevens is a close second with 51. Both of these scoring leaders are having a solid start to the season and are a vital part of the Rams’ offense. Stevens is proving to be an efficient scorer, as he is shooting 50% on the season.

Stevens is also leading the team in 3-pointers with eight and is shooting 50% from three. Stevens does not just look to shoot; he also distributes the ball very well. He leads the team in assists with 10, averaging 2.5 per contest.