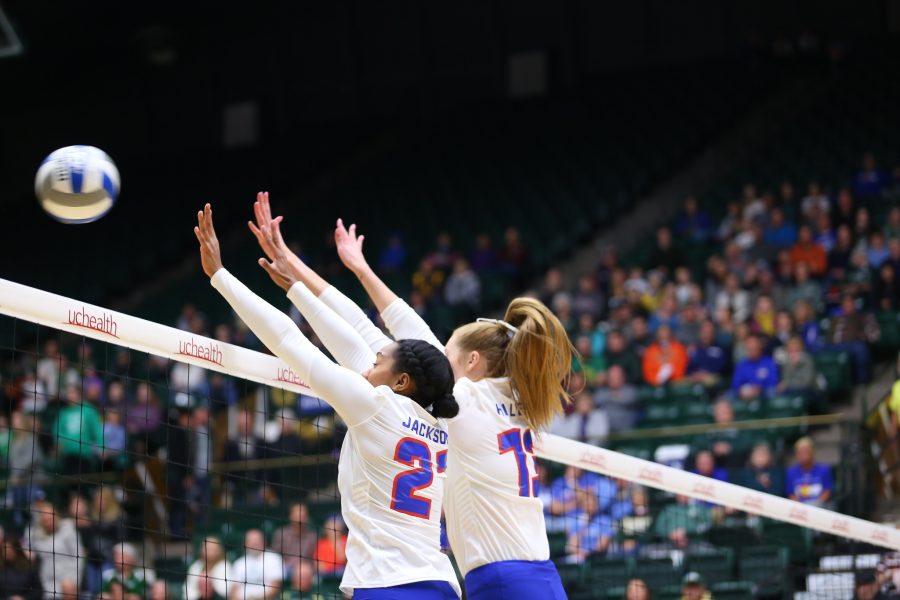 Jessica Jackson (21) Kirstie Hillyer (13) go up for the block. (Luke Bourland | The Collegian)

It’s business as usual for the Colorado State volleyball team this weekend, as the Rams (22-1) are in Fresno, California, for a matchup with the Bulldogs tonight at 7 p.m. MST.

CSU is riding a 21-game win streak and looking to stay perfect on the road, currently 7-0, while the Bulldogs are trying for their first win in nearly two weeks.

The Rams, on the other hand, just keep on climbing in the national rankings. They moved to No. 13 in the coaches’ poll, and they sit at No. 18 in the RPI rankings.

If CSU can find their way into the top 16 for the RPI rankings, then the Rams will host the first and second round of the 2019 NCAA Tournament. If the Rams win for the rest of their schedule, hosting the first two single-elimination rounds is a legitimate possibility.

Alexa Roumeliotis was named the Mountain West Defensive Player of the Week for her performance from Oct. 29-Nov. 3. The junior libero averaged 5.14 digs per set over the week, as CSU topped Wyoming 3-1 and swept Air Force.

This marked the second time this season that Roumeliotis has earned the award, the first being on Sept. 9. This also marked the sixth time a CSU volleyball player has been awarded a weekly conference honor this season.

Speaking of good defense, the Rams will look to shut down the Bulldogs’ outside hitters and keep Fresno’s hitting percentage low. Fresno hitter Desiree Sukhov missed time this season with an injury but leads the conference in points per set with 4.63 and is fifth in total points with 328.5.

The Rams are currently ranked second in the nation in opponent hitting percentage, keeping their competition to .103% while hitting .285%, good enough for eighth best in the country.

The Rams handed the Bulldogs a 3-0 sweep in their last meeting on Oct. 10 during CSU’s Pink Out game. Fresno will have a promotion night of their own for this game tonight, as the Save Mart Center will be celebrating Staff and Faculty Appreciation Night.

The Rams lead the all-time series 16-10 and have won the last two matchups, both in Fort Collins, but the Bulldogs took the victory in their home game last season by a score of 3-1.

After Fresno, the Rams will also face off against the University of San Diego on Saturday at 3 p.m. MST.