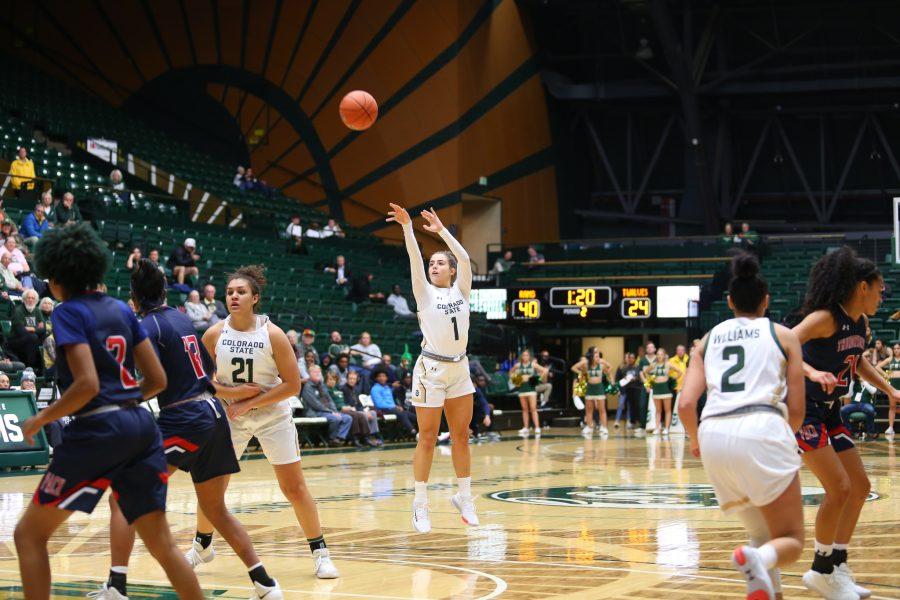 There’s no better way to head into the regular season than enjoying a landslide victory on your own floor. That’s exactly what the Colorado State women’s basketball team did in their exhibition game at Moby Arena on Wednesday, Oct. 30 against the CSU Pueblo ThunderWolves. The Rams enjoyed an 84-44 win.

The Rams started out disorganized, giving up an 8-1 ThunderWolves scoring run to start the game. However, that would be CSU Pueblo’s last lead of the game. Tori Williams sank both of her free throws on that possession to give the Rams a 10-8 lead. The ThunderWolves scored 15 points in the first quarter, falling short of CSU’s 19 first-quarter points.

The 3-point shot worked to CSU’s advantage in the second quarter, with Megan Jacobs draining two from deep to add to her eight first-half points. CSU’s high-pressure defense and aggression held CSU Pueblo to only nine second-quarter points, and the Rams took a 42-24 lead into halftime.

CSU continued to fire on all cylinders in the second half. Devos dropped 10 more points into the bucket, shooting a perfect 3-3 from the field and 4-4 from the foul line.

Redshirt junior Liah Davis was a defensive and offensive force, collecting 10 rebounds and 11 points in the second half. Those stats are more impressive when you realize that six of Davis’ rebounds were offensive rebounds, which contributed to the Rams’ 13 second-chance points in the half.

After gaining a sizable advantage, the Rams tested different lineup combinations and began rotating their bench players into the game. They were just as lethal, however, with 21 of the team’s 42 second-half points coming from the bench, including freshman guard Alexis Eberhardt’s first college point coming from a late free throw.

It’s clear this team has done some work after going 8-22 last season. Defense is at the top of Head Coach Ryun Williams’ list of things to work on.

“We’re going to have to be better defensively,” Williams said. “That was probably a C performance, and we need to be A+ to really go.”

That’s not the only thing that’s changed since last season in Devos’ opinion. “We just have way more energy,” Devos said. “The good thing about this team is that everyone can score. It doesn’t always come down to one or two players.”

A 40-point win is impressive, and the Rams will look to impress on Nov. 5 when they open their regular season at home against Chadron State. If this exhibition is anything to go by, CSU basketball fans could be in for an entertaining season.