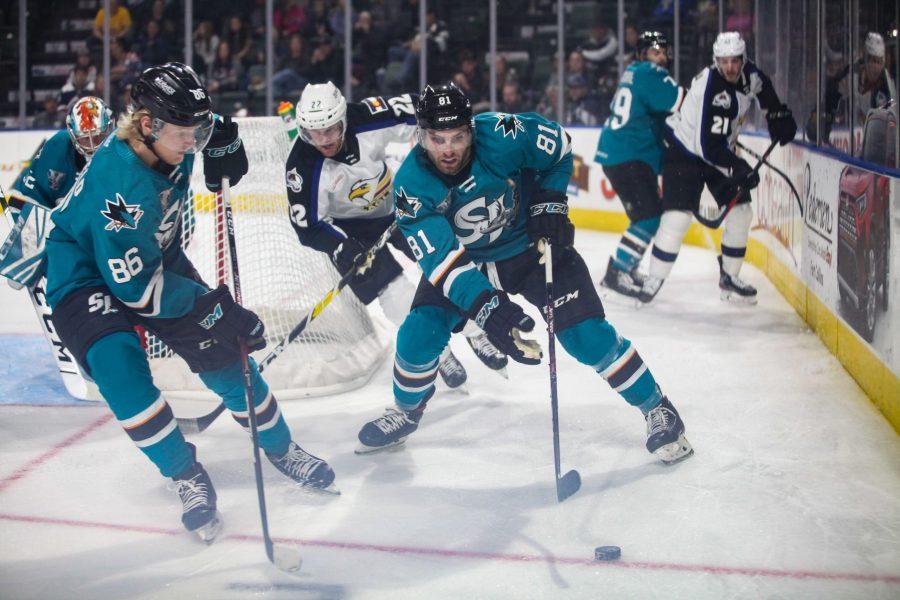 The San Jose Barracuda have an act for ending win streaks that belong to the Colorado Eagles. The Barracuda ended the Eagles’ nine-game win streak with a 9-0 blowout in March, and this weekend series had a feeling of déjà vu for Colorado.

Coming off a 4-2 win Friday night, the Colorado Eagles were flying high on a four-game win streak, while the San Jose Barracuda dropped their last two contests. The Eagles came out of the gate strong on Friday and took a 2-0 lead into the locker room for the first intermission.

On Saturday night, the Barracuda exploded for four first-period goals to jump out to a 4-0 lead. The Eagles gave up a power play goal and a shorthanded goal in the first 10 minutes.

They yielded two even-strength tallies on a breakaway and a two-on-one rush in the last five minutes to cap off an ugly first period. To make matters worse, the Eagles outshot the Barracuda 8-7 in the opening frame but were unable to find the back of the Barracuda net.

“We’re trying to play a north-south game,” Eagles captain Mark Alt said. “We’re trying to get pucks in deep. At the same time, you’re giving up a little possession when you’re chipping it by (them). They’re getting first (to) pucks in their end. We just weren’t as sharp, and we didn’t have the puck in their end as much as we wanted to.”

Coming into the game, Eagles goalie Adam Werner had started the team’s last five games, accumulating a 4-1-0 record with a .927 save percentage. The Swedish netminder headed to the intermission boasting a .428 save percentage, with more goals given up (4) than saves (3).

Hunter Miska took over the Colorado crease to begin the second period: his first appearance in a game for the Eagles this season. Miska had a strong outing in relief of Werner, stopping all 24 shots he faced.

“It felt good to get back in there,” Miska said. “It’s been a couple weeks since I’ve been in a game situation. (I’ve) been working pretty hard in practice to get ready for the game routine stuff.”

Neither team scored in the second period as the Barracuda maintained their four-goal lead heading into the third.

The Eagles simply struggled to generate offense in the game. The Barracuda did a good job of forcing the Eagles to dump the puck in while entering the zone. From there, San Jose netminder Josef Korenar made smart plays with the puck and set up the Barracuda break out, getting the team in transition quickly.

When the Eagles did try to skate into the offensive zone with possession, San Jose stood tall at their blue line and forced the Eagles into easy turnovers. The Eagles also struggled with the man advantage as they ended the night 0-4 and even gave up a short-handed goal to add to the disappointment.

“We weren’t dialed in,” Alt said. “You could tell. Stuff like that doesn’t happen, especially on the power play. Just not having a guy in front when there’s a turnover puck, it’s ugly stuff.”

Aside from a bad first period, the contest was closer than the score indicates. Colorado had their chances in the game, but they just weren’t able to get the puck past a stingy Korenar.

The Eagles will now hit the road for a matchup next week with the San Diego Gulls. Colorado is currently undefeated on the road with 3-0 record.