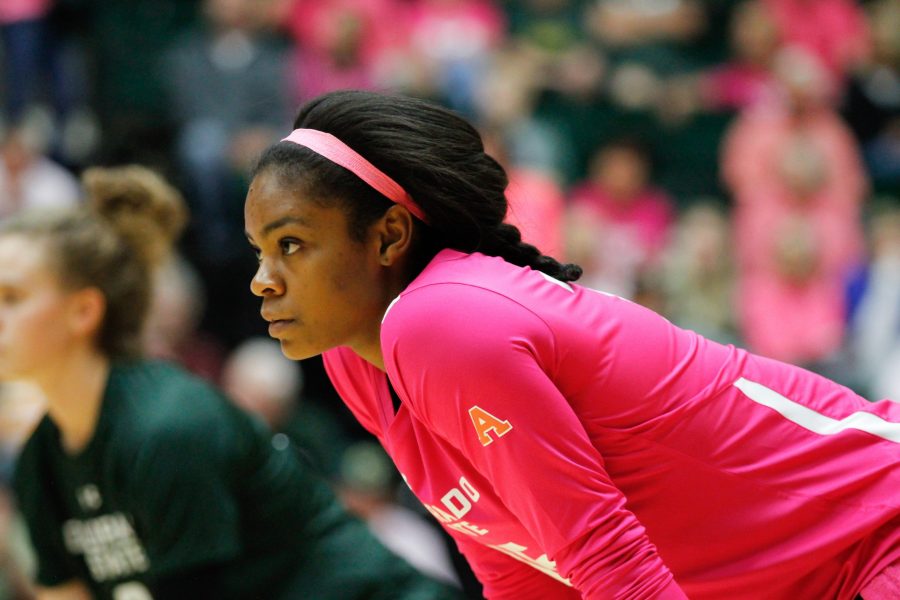 Breana Runnels waits for the serve during the game against Fresno State Oct. 27. The Rams swept the Bulldogs in three sets. (Ashley Potts | Collegian)

Outside hitter Breana Runnels led the charge for the Rams in what was a career night for the redshirt junior. Runnels tallied 29 kills off an impressive .404 hitting percentage. The 29 kills were a career-high for Runnels and a modern scoring record for a five-set match.

Since the turn of the century, only three other players have recorded 29 kills or more, and Runnels is the first since Dre Downs recorded the same amount against the University of Colorado in 2005.

In the opening set, the Cowgirls dominated the Rams at the net with seven blocks in the frame. CSU adjusted to Wyoming’s game in the next sets and allowed only four blocks the rest of the way.

The Rams finished with 10 blocks, with Paulina Hougaard-Jensen accounting for half of those and 10 kills. Katie Oleksak earned another double-double to bring her total to three on the season.

On top of her career night, Runnels recorded her 1,000th kill as a Ram and now has 185 in total this season.

CSU will continue conference play and put their 12-game winning streak on the line against Air Force Academy on Saturday, Oct. 5 on the road. The Rams will return to Moby Arena on Thursday, Oct. 10 against California State University, Fresno.