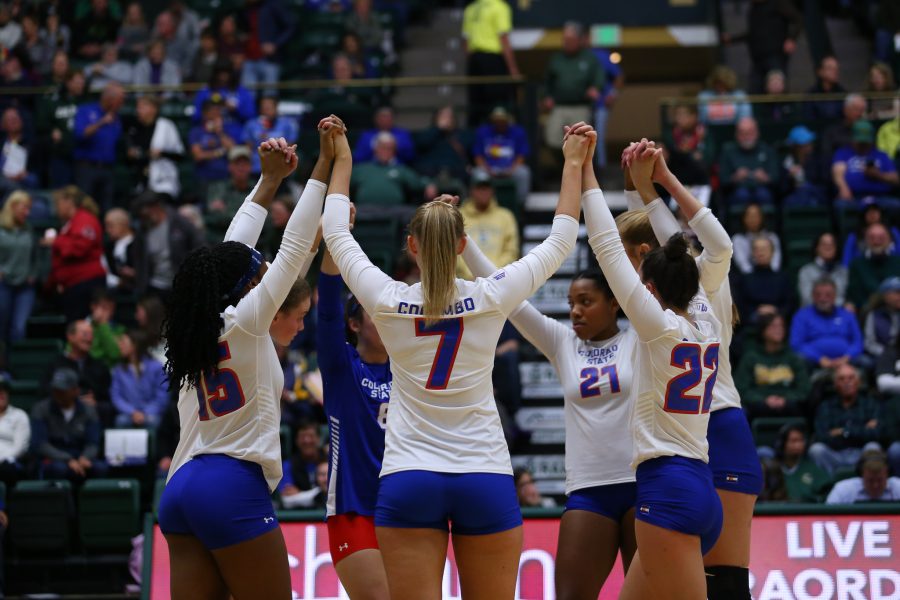 The Colorado State volleyball team comes together before the Border Wars. The girls beat University of Wyoming in four sets. (Luke Bourland | The Collegian)

Colorado State volleyball extended both their Border War home winning streak and their season win streak with a 3-1 victory intn Tuesday night, marking the 23rd consecutive win for CSU over the University of Wyoming at Moby Arena. CSU took home the win in four sets (27-25, 23-25, 30-28, 25-12).

In the first set, the Rams looked slow, and the Cowgirls give them all they could handle. Coach Tom Hilbert took notice in the first few plays that the team needed to switch it up.

The Rams opened the first set by going down 5-0 to the Pokes. Senior Katie Oleksak recorded a few kills of her own to help bring some life back to CSU’s side, and she utilized her hitters to help spark the attack. This technique worked, as CSU was able to catch back up toward the end of the first set.

The outside hitter that helped Oleksak the most was Olivia Nicholson. Nicholson had to replace Paulina Hougaard-Jensen in the rotation due to a lower body injury that the senior sustained on Monday.

“I think a lot of our errors in the first set were from swinging high, which aren’t necessarily bad errors, but the amount of them were not okay,” Nicholson said. “We knew that the first time we played Wyo, they blocked us really well in the first set, so I think those were just swinging high and … getting a feel for it, and after those three balls, Katie (Oleksak) looked at me and we had a timeout, and she said, ‘I trust you.’ And I was like, ‘You are right. I’m good. I’m a great player. I can do this.’”

CSU struggled in the second set. At the beginning, they were leading, but Wyoming came back and took set two. The Rams struggled with serving errors and couldn’t keep up with the Pokes’ attack. Wyoming hitters KC McMahon and Emerson Cyza were creating major issues for the Rams: both finished the game with double-digit kills. They were able to pick apart the Rams’ defense, which was missing a key piece of their rotation with Hougaard-Jensen on the sidelines.

The third set was a wild one. Both teams fought hard for the 2-1 set advantage, and the Rams prevailed. At the beginning of the set, CSU wasn’t looking like themselves, and the Cowgirls brought it with every play and hit some significant kills that the Rams couldn’t return.

What helped CSU get easy points, and eventually take the lead in the middle of the set, was the Cowgirls’ serving errors. But the Cowgirls got it together and extended the set after trailing 22-24 with CSU at set point. The Rams looked as if they didn’t have it in them to finish the Pokes at times.

It took a few extra points, but the Rams were able to take the third set and carry the momentum over to the fourth set, where they dominated the Cowgirls to remain perfect in conference play at 11-0.

Coach Hilbert stated that the third set was the best his team has played this season.

“We stayed with the same rotation, and we had Olivia (Nicholson) switch block into the middle on point scoring and then stay on the right side for pass, serve (and) receive,” Hilbert said. “Olivia (Nicholson) is one of the few people, probably in the country, (that) is the sixth rotation middle attacker. That made a big difference… It did allow us to get more stops on number six (Cyza and number five (McMahon). That helped us win this match. That third set was probably the most intense set I think we’ve played all season long. Back-and-forth battle. Crazy stuff is going on, but we persevere through it, … and we ended up scoring when we needed to.”

The fourth set wasn’t the prettiest victory, but the Rams took home another win. Kirstie Hillyer and Jessica Jackson led the team in kills. Hillyer had 17 kills, and Jackson had 11 kills.

The Rams are back at Moby Arena on Thursday at 7 p.m. to cap off their homestand as they host the Air Force Academy (8-14).

Angel Cooper can be reached at sports@collegian.com or on Twitter @angelcooper05.