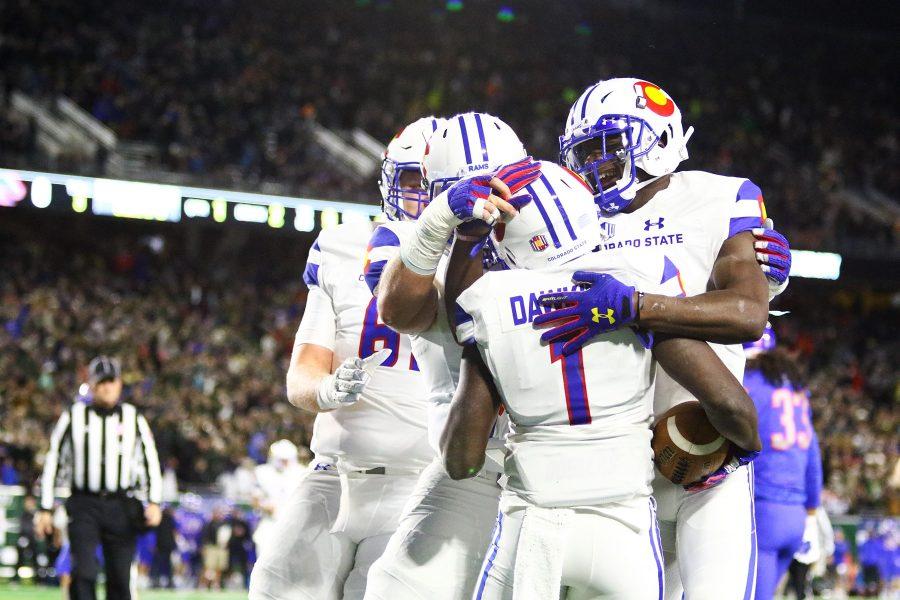 Colorado State players surround senior running back Dayln Dawkins (1) after a touchdown run during the 1st half of the Rams 59-52 loss against Boise State, Nov. 12, 2017. (Javon Harris | Collegian)

After winning two straight games on the road, the Rams return home for their State Pride game, looking to keep their short two-game win streak alive.

The first half of the season didn’t go as planned for the Rams, as they went 1-5 in their first six games. Injuries and poor play played a big role in the Rams’ lack of success to start the season.

With momentum on their side, the Rams are playing quality football by cutting down on the mistakes that cost them games earlier in the season. This team continues to stay positive, no matter what adversity they face.

“I’ve thought they continued to stack days and practices especially from that Utah State week,” Head Coach Mike Bobo said. “From there on, they’ve just gotten better, and their confidence has improved.”

Coming into the State Pride game, the University of Nevada, Las Vegas Rebels have an overall 2-6 record and 0-4 conference record, firmly placing the Rebels at the bottom of the Mountain West. UNLV is coming off of two straight losses to Fresno State and San Diego State. Momentum is surely not on the Rebels’ side.

Although Colorado State’s record isn’t as atrocious as UNLV’s, the Rams don’t have the privilege to overlook the Rebels. The Rams are still facing struggles. With the recent departure of the star running back Marvin Kinsey Jr., CSU needs to make a stand and take care of business in front of their home fans.

The Rebels are a defensively balanced team that tends to lean on their run game rather than through the air. UNLV averages just under 170 yards on the ground per game, and they look to use their offensive line to attack the Rams and punish CSU’s interior defensive.

“I’ve been really proud of our defense on third down,” Bobo said. “We’ve got some guys that can affect the passer, and I think that we’re doing a better job at matching coverage and playing color on color.”

Finding a way to be victorious in this matchup will do wonders for the Rams moving forward. It will be their third straight victory and will provide the confidence and belief that this team desperately needs.

Saturday’s game is a special one; the Rams will be sporting their State Pride uniforms. This is the third time the team will wear the state’s colors. The uniforms are considered to be a fan favorite by many, especially Colorado natives.

Kickoff is Saturday at 1:30 p.m. at Canvas Stadium. Be sure to show your support for the state of Colorado and the Rams!