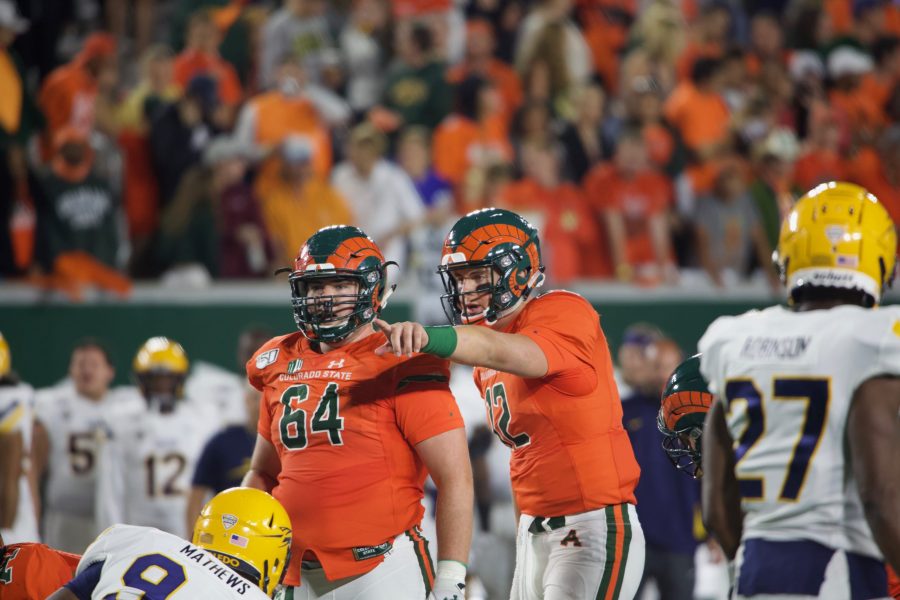 Patrick O'Brien talks to Scott Brooks before a play in the second half. The rams lost to Toledo 41-35 but kept it a close game. (Ryan Schmidt | Collegian)

Heading into the bye week, the Rams got their first taste of victory after 34 winless days, picking up their first road win of the season with a 35-21 win over New Mexico last Friday.

Wins have been hard to come by for Colorado State. Losing close games in the second half or fourth quarter has become a frustrating trend for fans and players alike. Through seven games, the Rams have looked like two different teams in the first half compared to the second half.

The offense has scored 131 total points in the first half of this season: 12 points above what they’ve allowed the opposition. The second half has been a different story. The Rams have been outscored 121 to 76 in the second half, a point differential of -45.

Winning masks problems, and since the team has struggled to win games, there’s plenty of blame to go around as to why the team hasn’t gotten the job done. The majority of the team’s struggles have come from a subpar performance on defense to limit big plays coupled with an offense that has struggled to maintain possession of the football. The Rams have put the ball on the ground 18 times, recovering 12 of those fumbles, and the defense has simply struggled to generate turnovers to get the offense back on the field.

The return of Warren Jackson ignited the offense last weekend. The redshirt junior had a career night, catching nine receptions for 214 yards with two touchdowns. Jackson was named Mountain West Offensive Player of the Week for his performance. The Rams need to get healthy in the bye week and prepare for the remainder of their Mountain West schedule that starts with two winnable games.

The Bulldogs have underperformed so far to say the least. Coming into the season, Fresno State was tabbed as a team that could compete for the Mountain West division crown. At this point, the Bulldogs have simply matched the level of whoever they play, despite having a group of very talented players on their roster.

A small bonus for the Rams coaching staff is that Fresno State and UNLV will play each other this weekend. Following a second-half collapse against Air Force, it will be interesting to see how the Bulldogs respond at home against the Rebels.

The bad
After matchups against bottom feeders in the conference, the Rams will play three tough games to end the season. CSU will host Air Force on Nov. 16, travel to Laramie, Wyoming, for a Border War date with the Cowboys on Nov. 22 and end the season at home against conference favorite Boise State.

These three games will test the character of this CSU squad, as the Rams won’t be favored in any of those matchups. The Rams have never defeated Boise State, and it has been five years since CSU has beaten Wyoming or Air Force.

The Rams need an upset against a rival to prevent this season from being a complete embarrassment and to provide the program with something to build off of for next season. The chances of making a bowl game are slim with such a stacked conference slate to round off the year.