CSU football heads to Fresno State without star running back 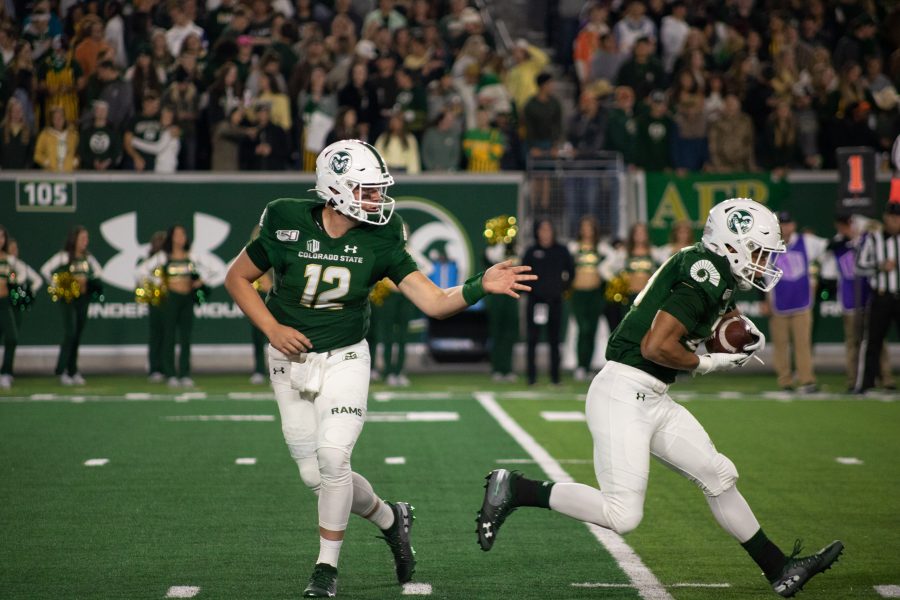 Patrick O'Brien(12) hands the ball off to Christian Hunter(28), as the Rams take on the San Diego State Aztecs during homecoming night. The Aztecs defeat the Rams 24-10.(Devin Cornelius | Collegian)

After a much-needed bye week, the Rams head to Fresno, California, looking to salvage what’s left of their 2019-20 season.

As a whole, this season has been a disappointing one for the Rams.

The team dealt with injuries, mental mistakes and poor execution all season long, which shows in their 2-5 record. However, the good news is that they have the opportunity to play football this week and take a step in the right direction after limping into their bye week.

In their last outing, the Rams came out victorious in a road battle against New Mexico. This was the Rams’ first win in four weeks, and it couldn’t have come at a better time. This win allowed the Rams to gain confidence and momentum heading into their week off.

During their bye week, the Rams were able to regroup, string together some good practices and put together a game plan to attack the Bulldogs. Execution will be the main focus heading into the game this weekend.

Coach Mike Bobo can put together the greatest game plan we’ve ever seen, but without execution, it is all for nothing.

Coming into the game, Fresno State holds an overall 3-3 record and a 1-1 record in the Mountain West Conference. The Bulldogs are fresh off a lopsided 56-27 home victory against University of Nevada, Las Vegas.

The Bulldogs present a unique challenge offensively for the Rams. They average almost 34 points per game and do it in a balanced manner. The Bulldogs like to throw the ball, but they love to run the ball.

In their victory last weekend against UNLV, the Bulldogs put up 260 yards rushing and six rushing touchdowns. This includes three different rushers with at least a touchdown. This isn’t the best news for the Rams, who have been giving up over an average of 220 yards per game this season.

The Bulldogs are a dynamic team that will be looking to expose the Rams’ lacking rushing defense. If the Rams’ interior defense can’t keep the run game under control, Saturday could be a long day for those wearing green and gold.

“Fresno is a balanced attack with both the run and the pass,” Bobo said. “We got to do a good job at reading formations and keeping our eyes in the right place.”

If the Rams are going to win this game, they will need to play sound football and have other players step up in key positions. As of Tuesday, the suspension of Marvin Kinsey Jr. was announced. The suspension has come at a time when the Rams need Kinsey’s presence against a talented Fresno State team.

This isn’t the first time Kinsey has been suspended for violating team rules. The running back was suspended in 2017 in the first half of the New Mexico Bowl and again in 2018 for the Rams’ home opener against the University of Hawaii.

Although he leads the team with seven fumbles, Kinsey is an explosive player with big-play potential when the ball is in his hands. The Rams’ rotation at running back will now feature junior Marcus McElroy along with freshman Jaylen Thomas and Christian Hunter.

This is the time to see what this team is really made of and how they’ll respond to more adversity.

Junior Guerrero can be reach at sports@collegian.com or on Twitter @juniorg45.