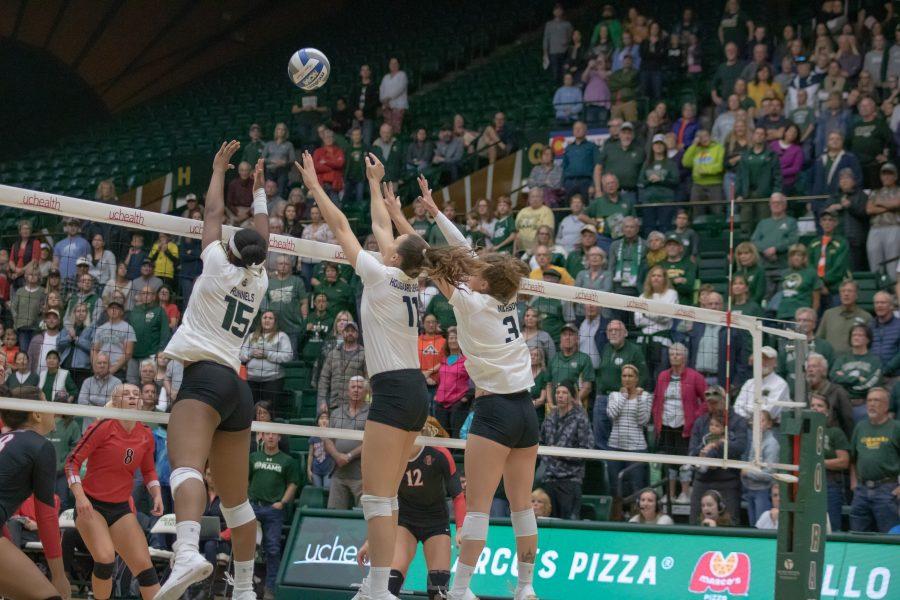 The Colorado State volleyball team continues to prove why they are number one in the Mountain West Conference, as the Rams swept San Diego State 3-0 (25-19, 25-15, 25-16) Saturday afternoon at Moby Arena.

The Rams’ defense came out a little slow against the Aztecs, and the team found themselves in a close game.

The Aztecs were playing their cards right in the front row. Hannah Turnlund, Tamia Reeves and Victoria O’Sullivan were the top hitters from San Diego State. Turnlund had a few powerful kills that CSU had no chance to return.

Coach Tom Hilbert called a timeout after Lauren Lee from San Diego State got a pair of aces on his team. The timeout was much needed for the Rams to adjust and pull themselves together. The break-in play worked out because the Rams came back with more energy and started to attack more.

Setter Katie Oleksak helped her team catch up. Oleksak found her groove as CSU rattled off a 9-0 rally to take the lead 18-13. After the first set, the Rams were hitting .484% on the attack, with Kirstie Hillyer and Breana Runnels leading the team in kills.

The second set was quite an exciting show for the fans watching the game. CSU came out with more energy and started attacking the Aztecs’ middle front. All the Rams players were covering each other, and the team was communicating better.

The communication helped tremendously, allowing the Rams to score easy points on the Aztecs. The Aztecs thought that taking two timeouts would cool down the Rams, but it did not. Oleksak helped lead the team in the right direction on where to make a kill and a block. Coming into the match, Oleksak wanted her team to take more risks against SDSU, and the team executed.

“My goal this week was to take more (offensive) risks.” Oleksak said. “We tried some new plays, and that was kind of fun.”

The third set was back and forth, but the Rams pulled away and secured the win, stretching their win streak to 15 games.

The Rams will be on their way to Boise State for a match on Oct. 17. The Broncos are 12-5 and 4-2 in the Mountain West Conference. Janell Walley, Lauren Ohlinger, Shae Duffy and Jessica Donahue are players to watch out for. CSU needs to make some adjustments and prepare themselves because the Broncos will give them a challenge.

Blocking is something that CSU is going to work on ahead of the matchup to prevent the Boise State offense from finding a rhythm.

“(We need to) work a lot on blocking because many teams that we played in preseason hit higher,” Hillyer said. “A lot of Mountain West teams sneak it higher, and we gotta work on taking away those angles and work on our low angles.”

Boise State will be hosting CSU on Thursday at 7 p.m.

Angel Cooper can be reached at sports@collegian.com or Twitter @angelcooper05.