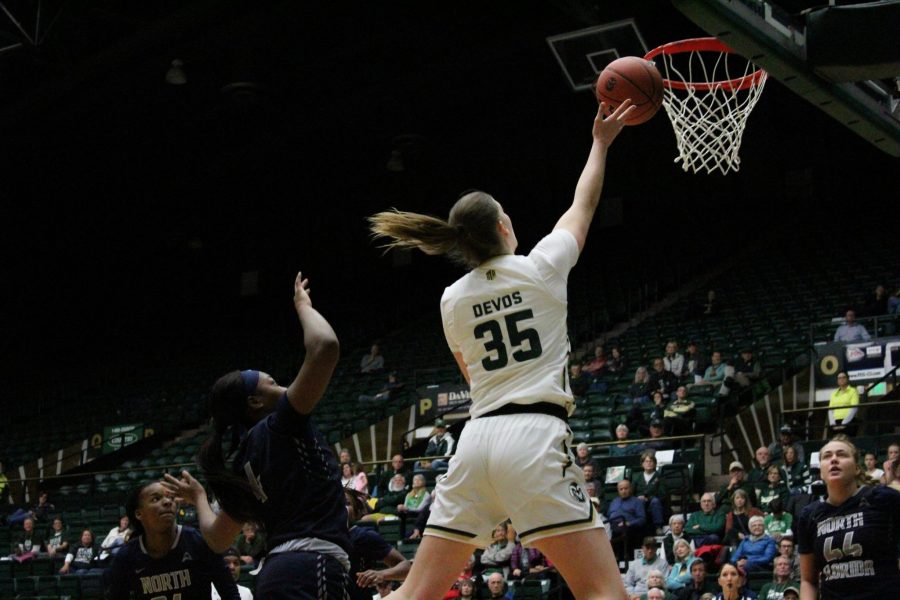 The sound of shoes squeaking on the hardwood loudly echoes through the practice court as players dribble basketballs up and down the court. Above the players sits a matte green wall with gold letters reading “Make A Statement.” After a 2018-19 campaign plagued with injuries and sit-outs, Colorado State women’s basketball is ready to do just that.

The most successful coach in CSU women’s basketball history, Ryun Williams, is confident they can improve from last season’s record.

Well, I guess we’re going to have to find out how this team will bounce back. It started in the summertime. it started by a hungry group of kids that we are going to work and make themselves a good basketball team, and that’s exactly what they’re doing right now.” -Head Coach Ryun Williams

As a sophomore, Lore Devos was the Rams’ scoring, rebound and turnover leader. She scored 407 points (87 more than the second-place scoring leader) and averaged 13.6 points a game. Devos shot an impressive 41.7% from the field and 76.6% from the free-throw line. Devos is eager to improve on her sophomore campaign and increase those numbers.

The Rams are ready for the new season to start, and they are hungry to compete against their opponents.

“Just (competing) against another team will do us good,” Devos said. “We’ll see where we’re at right now and what we can still work on and improve.”

The Rams were without Andrea Brady last season, which proved to hurt the team more than anticipated. Brady was forced to redshirt her senior year, a move that provided her with another year of eligibility. Brady is ready to get going and help the Rams bounce back this season.

“I feel pretty good,” Brady said. “I think everybody is working hard right now and coming together, and it’ll be exciting to get some games against another team instead of just us in practice.”

The Rams have some strong goals to help guide them to a better performance than last year.

“A couple of (goals) we went over are to win every home game and to win the Mountain West,” Brady said. “I think that’s a big focus for us, and obviously it’s a big goal because we didn’t do very well last year, but I think we got the right squad for it, so I’m excited.”

Williams has some important goals as well.

“We do have team goals; those probably stay in our locker room,” Williams said. “As a basketball coach, it is just to get better every single day, to just move them along at the right speed, and hopefully they can put themselves and we can put this team in a position to win a lot of basketball games. … We will progress nicely and hopefully be tough to beat.”

Williams is excited for his players to get back on the court and see how they can perform.

“I’m really excited about (Brady), just to have her back,” Williams said. “Her spirit, her athleticism and her fight is just quite special. The kids that sat out last year, the transfers from Utah, Tori (Williams) and Megan (Jacobs), Makenzie Ellis, Jamie Bonnarens, those kids that nobody saw in uniform last year, they’re good basketball players. So I’m just excited to get them out there. They need to get their feet wet again. They haven’t played a game in a long time. I think once they get comfortable on the floor, they’re going to do some good things for us.”

Chemistry is a necessity for a winning team. The Rams have a couple of transfers and players who did not play last year, which can make the chemistry hard to develop. However, Williams believes chemistry will not be an issue off the court.

“Well they like each other; they really like each other,” Williams said. “That was very evident when we went to Costa Rica this summer. These kids, they enjoy each other. They hold each other accountable on the floor, so I’d say the chemistry is good. But we’ve got to get that to the basketball floor. (Getting) the right combinations (and) playing well together, that’ll take some time.”

The Rams have a couple of games circled on their calendar, but they are not too focused on specific matchups. The team wants to focus on every game individually.

“Just kind of game by game,” Brady said. “I mean, there are some exciting matchups on the calendar obviously, but I think right now it’s just using, especially preseason, every game (to see how) we need to get better … and then really be ready to go when conference rolls around.”

Last season’s scoring leader for the Rams does have a couple matchups she is excited for.

“I think every game is just important,” Devos said. “But the Tennessee game is going to be fun, and (University of Colorado) is always really big too. And of course, start of conference.”

CSU will play a preseason match against CSU-Pueblo on Oct. 30 and will start the regular season against Chadron State on Nov. 5, both of which are home games. The Rams will take on school rival CU Boulder on Nov. 22 at Moby Arena. Then, on Dec. 4, the Rams will take on San Diego State to kick off conference play in San Diego.

The Tennessee matchup on Dec. 11. is in Knoxville. After Tennessee, the Rams come home and take on Mississippi Valley State on Dec. 14 and then head to Oklahoma to battle Tulsa State on Dec. 21. After the Tulsa game, the Rams will finish their season with 16 straight conference games.

CORRECTION: A previous version of the article stated that the “Make A Statement” banner is hanging in Moby Arena. The banner is actually hanging in the basketball practice gym, which is attached to CSU’s indoor practice facility.