CSU volleyball races to sweep over Buffaloes in opening Showdown 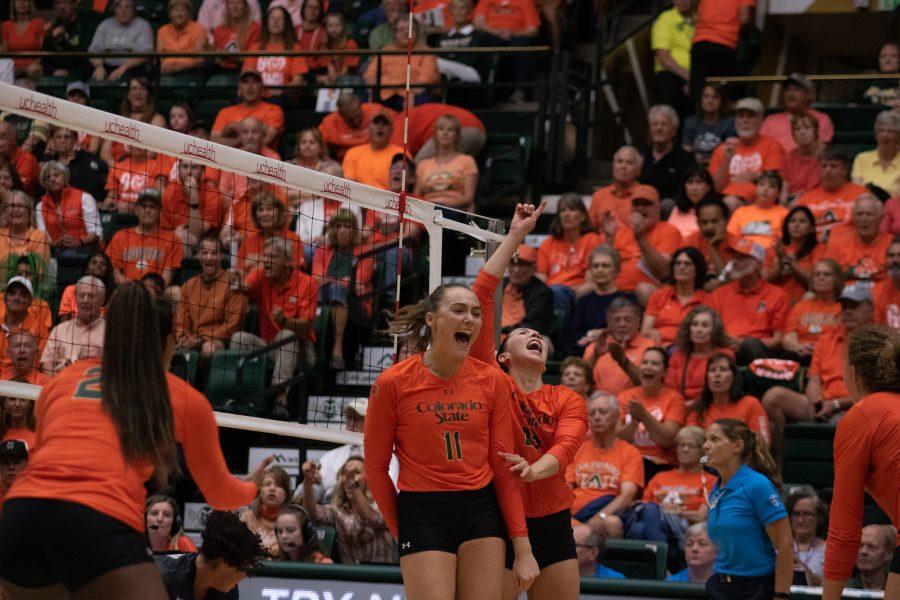 Paulina Hougaard-Jensen(11) and Katie Oleksak (22) celebrate after a big block, during Colorado State's game against the University of Boulder. The Rams beat the Buffs three sets to zero. (Devin Cornelius | Collegian)

Tom Hilbert and the rest of Colorado State volleyball would tell you that a matchup against in-state rival, No. 19 Colorado is just like any other match.

The Rams are consistently a program that ignores personal accolades and future matchups. Wins are the sole focus of each season. Their 4,085 fans knew the gravity of the match and paved the way for their latest win – a sweep (25-12, 25-12, 25-21) of the visitors to claim at least a portion of the inaugural Golden Spike Trophy.

The sweep was the first win for the Rams over the Buffaloes since 2014.

“I think we were on our game, the whole game,” redshirt junior Breana Runnels said. “Our service pressure was really strong and our serve receive was good but also, our hitters did a great job.”

Ironically, newcomer Brooke Hudson started the triumph with an opening-serve ace. The defensive specialist finished with three of the Rams’ four.

Across the three sets, only the final stanza was close.

The loss of Alexa Smith was apparent throughout the match for the Buffaloes. In her time before graduation, the former Purdue striker finished as a Second-Team All-American as a junior. Her absence caused the Buffaloes to rely heavily on senior Justine Spann. For their efforts, the Rams held the fourth-year hitter to a .087 hitting percentage.

“It was a similar gameplan (to Smith), we’re just better at it,” Coach Tom Hilbert said. “Our movements to the pin with our outside blockers and our ability to seal, we practiced it three days in a row, really working on that speed. You do have to give some credit to our (practice squad) too because they were running it like CU does.”

The Rams’ counter punch was Runnels. She entered the match leading the team in kills and exited the same way. In all, the outside hitter registered a .520 hitting percentage as part of her match-high 14 kills.

“I’m always going to be ready for the ball,” Runnels said. “I think (the) atmosphere made me calm in this situation, so I was just playing my game.”

For the rest of the Buffaloes, their struggles resulted in a .000 hitting percentage and only 20 kills. It was the worst hitting performance of the season for the top-25 squad.

Aggression from the lopsided pair of early sets carried the Buffaloes late. Up until their last chance, the visitors had only nine kills on 58 chances. Their hit percentage dipped to -.121 in the match’s first two sets. The Rams entered the match as the Mountain West’s best defensive team, holding their opponents to a .125 percentage in the season’s first six contests.

In both of the winning sets to open the match, the Rams held a sizable lead throughout. The Buffaloes failed to trim the lead below four outside of the opening points of each.

Ensuring the Rams didn’t allow a comeback – similar to their 2017 loss in which they led 2-0 and lost the final three sets – was Runnels once again. The team’s leader tallied four straight points to break a 12-12 tie. A timeout from the Buffaloes failed to halt the momentum.

The Buffaloes failed to capture a single lead in the match, settling for 11 ties. It was a swift change from last year’s 3-1 win for the former.

Even after the win, the leaders of the Rams know the gravity of playing the Buffaloes on back-to-back nights.

“It’s definitely going to be hard,” senior Katie Oleksak said. “I think it all comes from (the mind) now and keeping clean and strategizing.”

The Rams will head to Boulder for a Friday-night conclusion to the 2019 iteration of the rivalry.