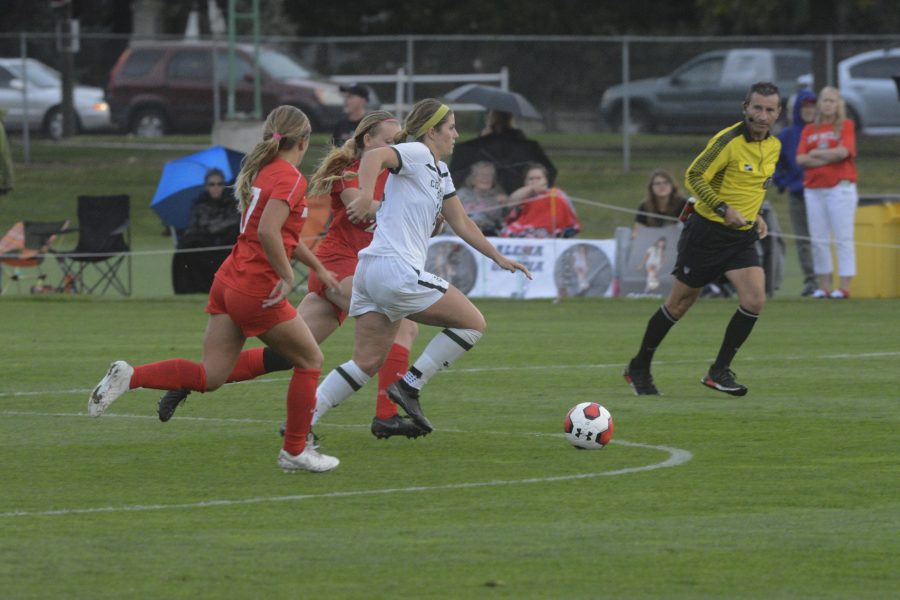 Senior midfielder Caeley Lordemann (14) dribbles the ball through two New Mexico defenders in the Rams 1-0 win over the visiting Lobos on Sept. 27. Lordemann had the game’s only goal in overtime to bring the Rams even with their previous record for wins in a season. (Gregory James | Collegian)

Opening conference play this past week, the Colorado State soccer team was out to add to their stellar record. The team walked away with a weekend split, going 1-1 to improve to 6-3-1.

Colorado State opened up conference play against New Mexico on Friday having never beat the Lobos.

Ninety minutes of play was not enough to decide a winner, and after a scoreless regulation, the Rams captured their third overtime victory this season. Caeley Lordemann was once again the hero, scoring in the 95th minute to give the Rams their sixth win of the season, tying the program record. Lordemann has scored the game-winner in all three of the Rams’ overtime wins this season.

“We have each other’s backs, and we have one goal and we are all working to get to it,” forward Kristen Noonan said.

Lordemann’s sixth goal of the season set a new career-high and was also the sixth game-winner in her career. The game-winner came as Lordemann received the ball on a Gracie Armstrong misfire and chipped the ball past the Lobos’ netminder.

“Thank goodness Caeley (Lordemann) plays for us,” Coach Bill Hempen said. “She has got all three overtime game-winners, so that’s a clutch performer.”

The senior captain is cementing herself into Rams history. She is already the leader in all-time goals and continues to shine when her team desperately needs her.

Goalkeeper Gabi McDonald also put up another impressive game. McDonald had six saves on 15 New Mexico shot attempts in the shutout win. McDonald shined as a vocal leader. She was constantly communicating with her teammates, which is a good sign from a young sophomore who should be a contributor for a long time.

Nothing going for the Rams today.
Next Up: At Colorado College, Oct. 4 at 7 p.m.

The Rams dropped their second conference game of the season in a 2-0 loss on the road against San Diego State University. The game and statistics were closer than the final score would indicate. CSU controlled the tempo and the ball for a good chunk of the game but was unable to find the back of the net.

CSU had 10 shots and five corner kicks, each of which were only two less than SDSU.

The Rams passing looked on-point while they threaded the defense early in the match. Noonan was aggressive: the forward had four first-half shot attempts and multiple header attempts that barely missed the mark.

Even with these efforts, the 2-6-1 Aztecs came away with the upset victory. After the loss, the Rams come back to Colorado but venture to Colorado Springs to face off against Colorado College.

The Rams will attempt to bounce back into what should be a battle against a quality 6-2 Tigers team this Friday. CSU is 1-0-1 following a loss this season.