Loberger: It’s better for the program if Rams don’t play CU every year 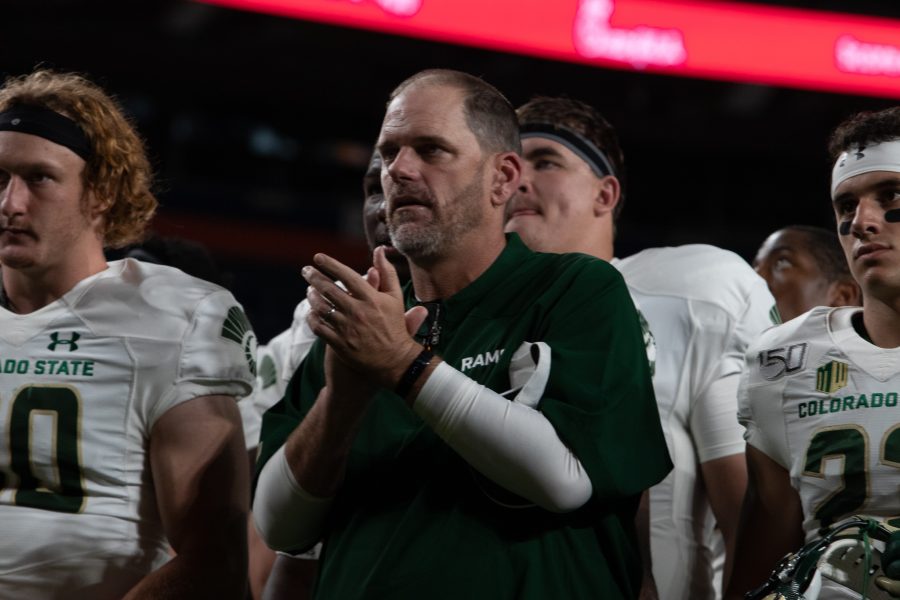 Mike Bobo claps for the Colorado State University Football Team, along with the crowd of fans, after losing the Rocky Mountain Showdown on Aug. 31. (Anna von Pechmann | Collegian)

The final Rocky Mountain Showdown played on Broncos Field at Mile High Stadium has come and gone, and for the sake of Colorado State University football, good riddance.

What started out with hope and optimism about a new era of Colorado State football under Mike Bobo has soured to a feeling of “When are we going to start winning again?”

Bobo’s tenure as the head coach at CSU has produced three 7-6 seasons with no bowl wins and a lowly 3-9 record last year that, in my mind, is a wash due to the health issues Bobo was dealing with.

While Bobo has led the Rams to three bowl games in his first four years, the rivalry games are the ones that hurt the image of the program. CSU is 1-4 against Air Force, 1-4 in the Border War and has been unable to get their first win against Boise State.

Friday night, after another loss to rival Colorado, Bobo and the Rams watched first-year Buffaloes Coach Mel Tucker hoist the Centennial trophy in his first game on the sidelines for CU.

After the game, Bobo entered the press room and sounded off on the officials.

With Broncos Stadium at Mile High being a neutral-site location for the game, the home team provides officials, and CU was the home team, so the Pac-12 officiating crew was calling the game. Rams fans may be having some unpleasant flashbacks to the 2017 showdown where officials played a huge role in a 17-3 Buffaloes victory when a plethora of offensive pass interference flags kept CSU off the scoreboard.

I don’t think the officials played as big of a role in this year’s Showdown as they did in 2017. I also don’t think that it’s good for CSU football to play CU every year. Don’t get me wrong, I love rivalries, and I understand the dynamic of wanting bragging rights for the state of Colorado. But for Bobo and the Rams, of all the statistics you can rattle off about the CSU program in the past five years, the one that sticks out the most is 0-5 against CU.

Plans for the Showdown are still up in the air as far as scheduling goes for an annual game. CSU is slated to play Power Five programs Texas in 2024, Texas Tech in 2025 and Vanderbilt in 2020, 2021, 2025 and 2026. Joe Parker commented back in 2017 that the Rams likely won’t add another Power Five team to their schedule during those years.

On the flip side, considering CU’s three non-conference games, the scrutiny of the strength of schedule and the recent history of CU dominating the Showdown, they’re inclined to find another opponent.

The fact of the matter is that the Rams can still have a good season despite another Showdown loss. This will be the last time the two teams will play at a neutral site, as the rivalry will come to Canvas Stadium next year and will be a home-and-home with 2023 played at Folsom Field and 2024 back in Fort Collins.

This brings a completely different element to the Showdown. This rivalry was made to be played on one of the two campuses. This year’s Showdown attendance totaled just under 67,000 people. The capacity at Canvas Stadium is 41,000, and Folsom Field tops out at 53,613, which means the environment will not disappoint when the Showdown comes to Fort Collins next season.

“I’m excited about it,” Bobo said. “I’m excited about having an extra home game. … It’s better for [the University]. I think the game on campus is [going to] bring energy. Having CU come to our place, our place is gonna be excited. … I’ve always thought these games should be home-and-home with neutral refs.”