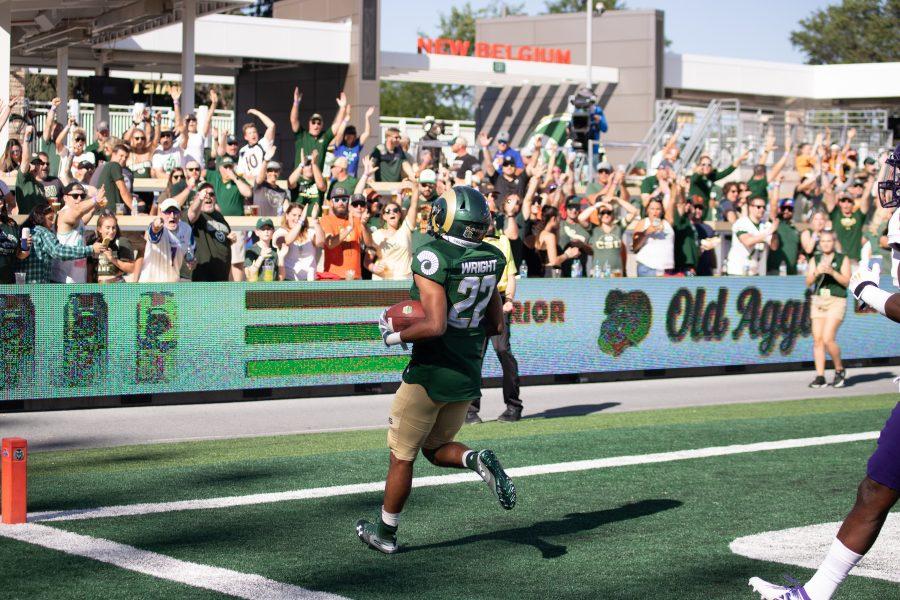 For the past decade and a half, the center of the college football world has run through the Southeastern Conference. So for a non Power Five school like Colorado State, any time you can match up against a SEC team, it’s a good chance to measure your football team.

CSU was unable to get another win over the University of Arkansas and suffered a crushing 34-55 loss at the hands of the Hogs. Here are four takeaways from Saturday’s contest and how the Rams look after departing from Fayetteville.

If you didn’t know already, Dante Wright is the real deal

Through the first two games, Dante Wright has done nothing but exceed expectations every time he’s stepped on the field. Saturday was no exception. The freshman wide receiver hauled in four receptions for 97 yards and another touchdown, his fifth score through three games.

Wright showed his athleticism when he was able to connect with backup quarterback Patrick O’Brien on a third-and-13, making an acrobatic catch while staying inbounds, then running down the sidelines for a 75 yard touchdown.

Wright has made his presence known since he arrived for fall camp, and Head Coach Mike Bobo and the rest of the coaching staff had some high praise for the receiver before the game.

“He’s a competitor,” Bobo said. “He just goes. … I think that’s the way he was raised. I think his dad and his mom pushed him, and he likes to be pushed and he can go all day.”

Wright will continue to be an integral piece of the offense that has looked impressive thus far, averaging just under 35 points per game.

The backfield was able to move the ball, and they need to keep it up

Coming into this contest, the focus on offense was on how well the Rams would be able to establish the run game. Bobo mentioned earlier in the week that the focus was to come with a balanced offensive attack while limiting Arkansas’ offense.

“We have to be balanced, and we have to get first down,” Bobo said. “This is a talented team on offense. They got two talented receivers, a talented (running) back, and I like (Nick) Starkel. … We have to keep the ball out of their hands.”

The Rams have flashed big play ability in their opening drive in each of the first three games, typically on the first or second play. CSU roared out of the gate as Marvin Kinsey Jr. made quick work of the Arkansas defense, breaking free for 75 yards for a touchdown run on the second play of the game. Kinsey finished the game with 20 carries for 180 yards and the score, his second career game with 100 plus rushing yards.

Collin Hill’s status is up in the air after another scare with his knee, so it’s hard to not imagine that if the passing game stalls in Hill’s absence, then the run game will be relied upon to lead the offense.

Turnovers have killed the Rams in the first three games

Through the first three weeks, the Rams have turned the ball over eight times and only generated two of their own. Six of those eight turnovers have been fumbles, and they have led to 27 points going toward the oppositions’ score. This is not a recipe for success — little things like ball security and avoiding small mental mistakes are the marks of winning programs.

The turnover number could be higher considering the Rams fumbled a third time against Western Illinois and had another fumble against Arkansas that was called off due to a roughing-the-passer call for the hit that injured Collin Hill.

The Rams are going to have a hard time winning games if they continue to put themselves out of contests by giving the ball away. They are currently ranked near the bottom of all 130 FBS teams in turnover margin with -6.

The Rams had to rely on backup O’Brien to replace Hill after it was announced in the third quarter that Hill would miss the remainder of the game. O’Brien completed seven of 10 passes for 106 yards and a touchdown.

When O’Brien entered, the Hogs had built a 10 point lead over the Rams, but the Nebraska transfer did his part to get the game tied 34-34 before Arkansas pulled away for a 34-55 win.

Despite the defeat on the scoreboard, the biggest loss the Rams suffered Saturday was losing quarterback Hill to yet another knee injury. Hill was hit illegally at the knee by Hogs defensive back Joe Foucha. Hill’s left knee looked to have caved in, and Hill appeared to be in immediate agony.

Hill underwent an MRI on Monday, but no update on the redshirt junior has been released. It’s no secret that Hill is Bobo’s number one. Hill has had his left knee repaired twice, once in 2016 during his freshman season and again in March of 2018. An emotional Bobo shared his thoughts on Hill and his latest injury after the game.

.@CoachBobo_CSU talking about Collin Hill will break your dang heart

Hill left today's game vs. Arkansas with a left knee injury – the same knee that he's torn the ACL in … twice@CSUFootball #Denver7 pic.twitter.com/ojAAvERoHJ

Updates will come when more information about Hill’s injury is released. For now, the Rams faithful can only hope it’s a strain and not a third tear to the quarterback’s ACL.

Correction: An earlier version of the article stated that Hill underwent an MRI on Sunday, Sept.15. It’s was reported that Hill’s MRI was rescheduled for 12:30 p.m. on Monday, Sep.16.