Breana Runnels earns award in back to back weeks 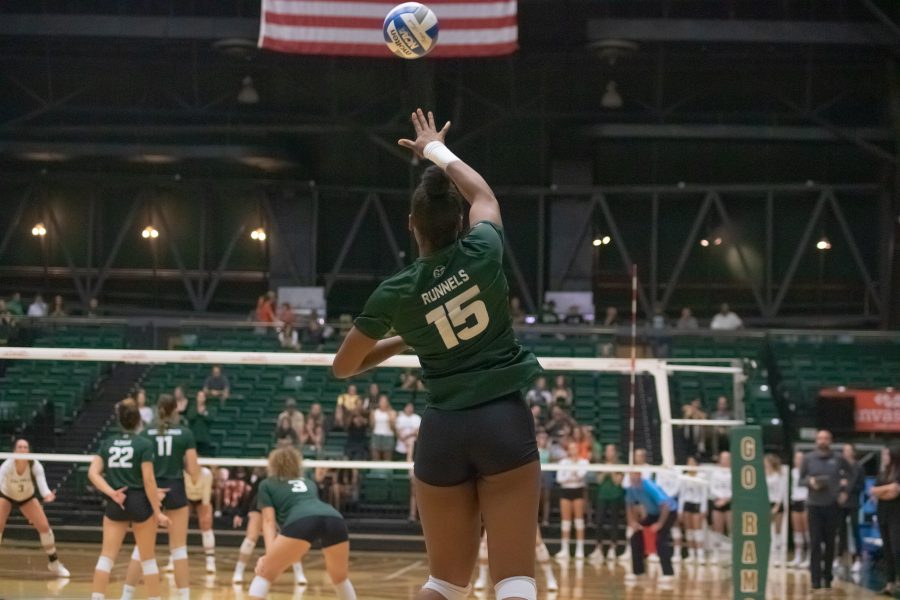 Breana Runnels(15) serves the ball to Cal Poly during a home game against the Mustangs. CSU wins three sets to zero.(Devin Cornelius | Collegian)

Colorado State volleyball earned another Mountain West weekly award after sweeping the University of Northern Colorado and Cal Poly and collecting a 3-1 win over Oregon State.

Runnels earned a team high with 36 kills in 10 sets played. She averaged 3.6 kills per set and double-digit kills in all three matches. Runnels was in full game mode and showed that she wasn’t going to let her team down.

In her hitting, she averaged .381 against Northern Colorado, .481 against Cal Poly and .269 against Pac-12 Oregon State. Runnels’ stats proved that she earned Offensive Player of the Week, hitting efficiently and effectively against her competition.

CSU’s opponents better watch out for Runnels, because she is on fire. It doesn’t seem like she is slowing down at all as the Rams move into their conference schedule.

After picking up three more wins this past week in the Homewood Classic, the Rams continue to climb in the national rankings. The Rams cracked the top 25, sitting at No. 25 in last week’s poll and moving up to No. 17 this week.

Colorado State will start their Mountain West schedule this week by hosting New Mexico on Thursday at 7 p.m. before traveling to the University of Nevada, Las Vegas this Saturday.

Angel Cooper can be reached at sports@collegian.com or via Twitter @angelcooper05.