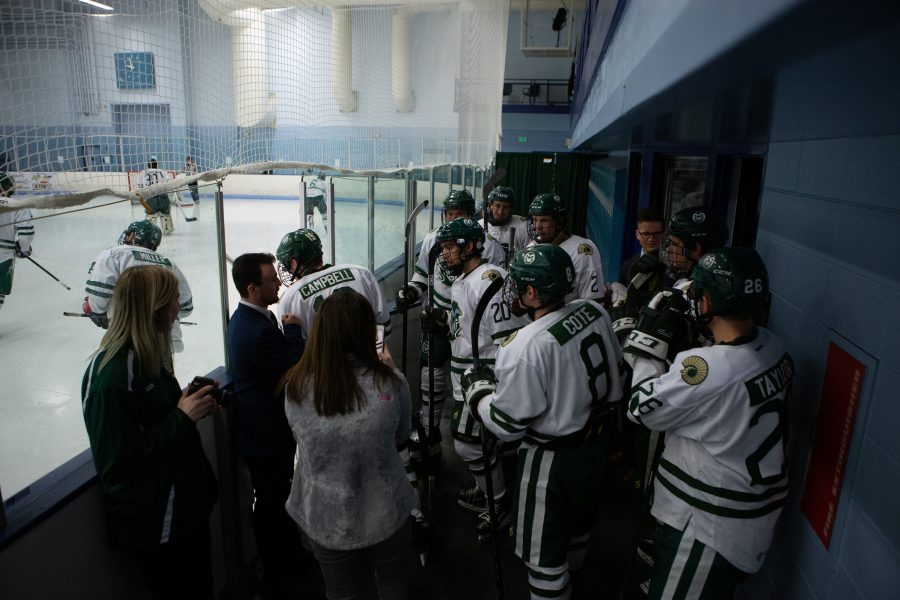 The Rams prepare to enter the ice at the beginning of the 3rd period of the game against CU on February 16, 2019. CSU went on to the ice with a 1 point lead in the third period. (Josh Schroeder | Collegian)

The Colorado State University men’s hockey team has a chip on their shoulder and is ready to make a run at nationals for the first time since 2016-17. After two losing seasons and numerous losses to rival University of Colorado, the Rams finally have a core of players that have the potential to get them over the hump and back to their winning ways.

“High hopes for this year, lots of returning players coming back,” CSU Assistant Coach Jameson Wicks said. “We’ve got the same coaching staff, and the majority of our group will be coming back too.”

“When you just miss the cut for the tournament and end up on the outside looking in, the extended offseason makes you grit your teeth and gives you something to fight for when we get started up here in September.”- ASSISTANT COACH JAMESON WICKS

They beat top-10 ranked University of Nevada, Las Vegas on the road, handing them their first home loss of the season. They followed that up with another series split while on the road against top-ranked Iowa State University. They avenged a blowout loss at the Pepsi Center to rival CU by coming out on top in an overtime thriller at EPIC on senior night.

“I think the record doesn’t show exactly how we played,” Wicks said. “Our overall record was [10-21]. Seven of those wins were against top-15 ranked teams. … The number of games that were one-goal games, overtime games or shootout losses, there was a bunch of those too, and that says to me that we weren’t throwing games away; we were in every game. It’s just a matter of small mistakes and shoring those things up that gets us on the other side of the coin where we’re [21-10].”

Falling short of playoffs has galvanized the returning members as they’ll try to restore a winning culture that every program needs to maintain success.

“We’re definitely itching to get back [at it],” junior forward Liam Millar said. “All the boys are pretty fired up about this season. We ended on a good note last year and have some things to look forward to this year. After just missing the cut last year, we have a chip on our shoulder.”

Next month we will be having our annual golf tournament after our home opener! With access to driving range, contests throughout course, and a pre-tournament breakfast, you won’t want to miss out! Price to increase after Aug. 9 https://t.co/o8NSdMNGdT

The Rams home opener won’t take place until Sept. 19 when they host the Midland University Warriors at EPIC. The next day, the team will host their annual alumni skate, followed by an inaugural CSU alumni golf tournament, which will be played on Sept. 21.

“We’re trying to get bigger in the community and grow the program,” Millar said. “We’re doing the first annual Rams alumni golf tournament. It’s going to be at the Collindale Golf Course in September.”

Before those events, the team will have their formal tryouts, preceded by their usual “Battle Camp,” which begins on Aug. 21.

“It’s more of a pre-season conditioning camp,” Wicks said. “[It] provides [players] with a chance to knock off the rust and get up to speed the week before main tryouts start. … It provides incoming players a chance to extend their tryout or get to know the coaching staff and current players better because main tryouts are a small sample size to make an impression.”

With a big returning class of players that have experience, the expectations are high inside the locker room.

“I think this is a tight group,” Millar said. “My class and the class above us have been together for the past two years, and I think we’re all ready to try to make a run and get the guys that are graduating [their] shot to make it to nationals. Expectations are very high for us, and I think this is a do-or-die year for us.”