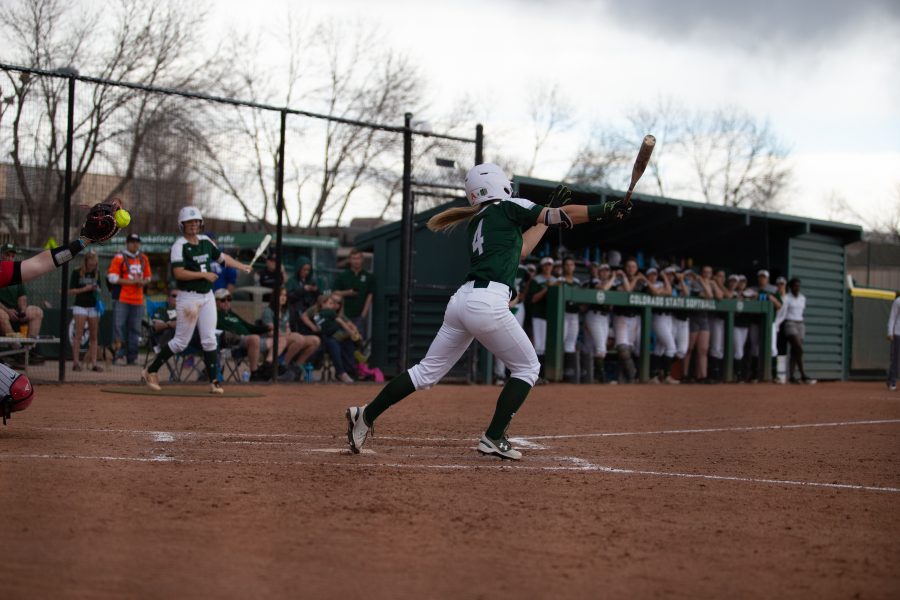 CSU outfielder Ashley Michelena has a swing and a miss during the game against the Aztecs. The pitcher would end this particular at bat by walking her with four balls. (Josh Schroeder | Collegian)

If you build it, they will come.

Instead of building a baseball field in the middle of a cornfield, Colorado State will build a women’s athletic complex where the current soccer field is — south of the Moby Arena parking lot. This project will cost $6.3-$6.5 million and will allow the softball and soccer teams to have a proper practice and playing facility.

“You try to cross priorities off the list, and we’re finally at the point and time where we’re able to focus a lot of resources and planning in place to make sure these two sports get what I would deem best-of-class facilities.” -CSU Athletic Director Joe Parker

CSU has allocated a $300,000 budget to pursue design possibilities and program plans for the project. The $300,000 will be funded through an extension of a student fee of $5.07 per semester. The Student Fee Review Board approved the measure the past calendar year.

The initial $300,000 will put the University in a position where they can confirm the costs of the project and develop a program plan for the site. University leadership will then request final approval and put the project out for bid.

University leadership has requested specific needs for the facility. These needs include a gateway to the complex and an area for concessions and restrooms, team meeting space for both programs, lighting for the fields and permanent fan seating.

“I’m kinda like pinching myself right now,” softball Coach Jen Fisher said. “To be a part of this is really exciting. It’s something that speaks a lot toward our leadership at Colorado State, and the student support, that was just incredible. You want to have a great game-day experience as well, and they’re supporting the women’s programs as well. For me to have a little bit of a voice while I’m a coach here is exciting.”

Why this is important

CSU women’s soccer has played at three different sites on campus since the program’s first year in 2013. The softball facility has remained nearly untouched for 25 years.

The project will help with recruitment for both programs as well. Moby Arena training room, the Anderson Academic Center, the Anderson Weight Room and the Indoor Practice Facility have all helped programs with recruiting new athletes. A stadium feel is important to the two programs.

In 2018, the CSU softball team staged a sit-in at a Rams football spring practice to protest inequality in the practice facilities between teams at the University. Bad weather did not allow the softball team to play, and they had nowhere to practice.

For reference, Canvas Stadium cost the campus $220 million dollars in 2017.

A Title IX report, released in 2017, said that as of 2015, universities nationwide spent about twice as much on men’s athletics than they did women’s.

Now, the facility is a stepping stone for women’s sports equality and something that both programs well deserve.

Rams softball in their 2019 campaign went 39-12 and made it to the second round of the Regional NCAA tournament. Soccer is coming off their best season in seven years as a program with a 6-9-4 record.

“We’ve talked a lot about what we want it to be,” said Joe Parker, CSU athletic director. “One thing I want to see us do is build something that feels uniquely Colorado State that feels like it’s a unified complex. I think we’ll be able to achieve that, and we’ll be able to create the best fan experience possible for both programs.”