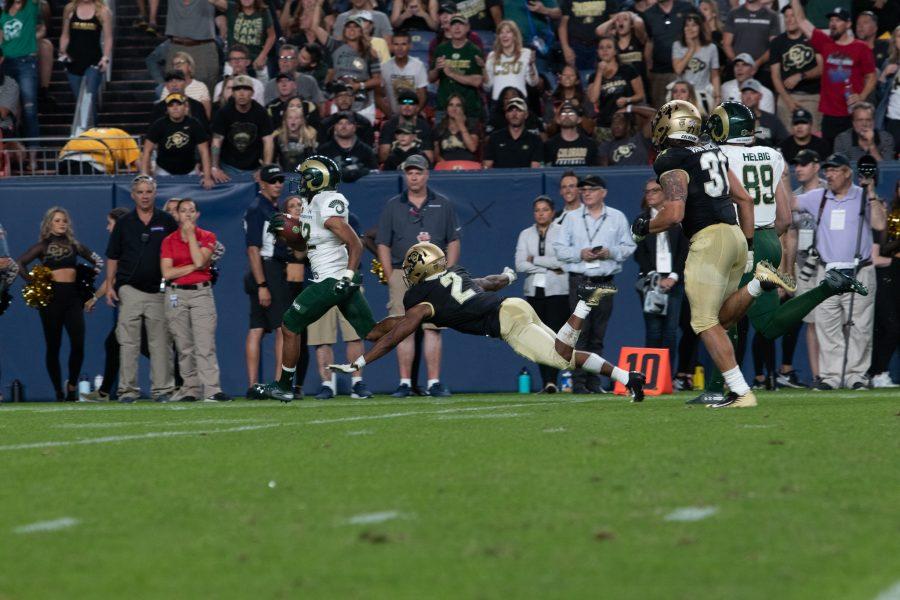 The final chapter of the Rocky Mountain Showdown in Denver was a wild one for both University of Colorado Boulder and Colorado State University.

If you wanted a shootout in the first half, then you came to the right football game. Both teams went back and forth in an intense offensive battle in an exciting first half that totaled five lead changes.

The offense was dominant for both teams, as they combined to a total of 545 yards in the first half alone. Rams quarterback Collin Hill went 13/16 for 180 yards, two touchdowns and one interception. The interception came courtesy of CU free safety Mikial Onu, who snagged Hill’s pass in the end zone.

Both teams traded blows, and it looked as if the Rams were in a good spot to take a 21-17 lead into the dressing room. With less than two minutes remaining in the second quarter, Steven Montez was able to work the Buffs down the field and connected with a wide-open Laviska Shenault to give CU a 24-21 lead.

With under a minute remaining, CU kicked off, and CSU’s Anthony Hawkins took the ball out of the end zone and ran it all the way up near the Buffs’ 10-yard line. The Rams’ big return was called back for an illegal block in the back, Hill took a knee and CU headed to the locker room up 24-21, with CSU receiving the second half of the kick-off.

“It’s too big of a game to not have mutual refs … with the fumble in the second half, the damn umpire saying ease up, ease up, ease up … and then they allow it to be a fumble.”

After a fast start in the first half, the Rams’ offense stumbled in the third quarter. CSU fumbled the ball on their first play, and CU made quick work of the Rams’ defense and added to their 24-21 lead with another touchdown, making it 10 points for the Buffs off three CSU turnovers.

“First of all, give them credit; they made more plays,” Bobo said. “We didn’t make the plays when we had to, but they did.”

CSU look poised to get back in the end zone and back into the game on their next drive. However, an arrant snap brought their drive to a halt, and the Rams settled for a field goal.

CU closed out the third quarter with a nine play, 68 yard drive that resulted in seven points. A huge fourth down conversion from Shenault kept their drive alive and extended the Buffs’ lead 38-24.

Heading into the fourth quarter down two scores, the Rams completed a six play, 75 yard drive that resulted in a touchdown. This impressive drive cut the Buffs’ lead to 38-31.

Without hesitation, the Buffs found themselves back in the end zone with a six play, 75 yard drive, making their lead 45-31 with nine minutes to play. When the clock struck zero, CU had captured their fifth-straight win with a 52-31 victory over the Rams.

CU made the necessary adjustments in the second half to separate themselves from the Rams, but penalties and turnovers cost CSU the game.

This might not have been the result the Rams were looking for, but this is a game the Rams can build on.

The Rams showed a lot of growth and maturity by playing the entire football game and fighting until the final whistle.

“We didn’t quit,” Hill said. “I think last year at times, we probably would’ve just laid down and got 30 pieced, but we didn’t. … We continued to fight, and I think this team is going to win a lot of games.”

The Rams look to pick up their first win of the season on Saturday as they host Western Illinois University. Kickoff begins at 2 p.m.

Junior Guerrero can be reached by email at sports@collegian.com or on Twitter @juniorg45.