The Rocky Mountain Collegian • May 8, 2019 • https://collegian.com/articles/sports/2019/05/category-sports-the-future-looks-bright-for-the-colorado-eagles-after-first-year-in-ahl224346/ 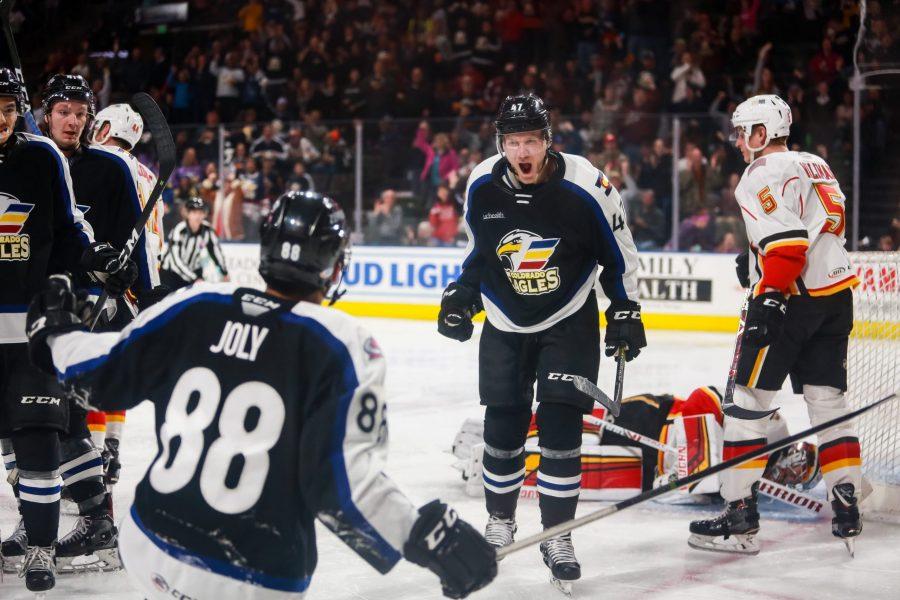 Eagles forward Dominic Toninato celebrates a goal scored by Michael Joly in the second period of the game against Stockton Feb. 8 at the Budweiser Events Center. (Photo Courtesy of Colorado Eagles)

It’s a little quieter than usual this time of year at the Budweiser Events Center.

After claiming back-to-back ECHL Championships in 2017 and 2018, the Colorado Eagles were eliminated by the Bakersfield Condors in the first round of the 2019 Calder Cup playoffs.

Losing in the first round of the postseason isn’t how the Eagles planned to kick off their inaugural year in the American Hockey League. Though they didn’t win the championship, the club battled through their first AHL season creating a memorable experience for players and fans alike.

“I thought it was a good year,” defenseman David Warsofsky said. “First year in the (AHL) here in Loveland, I had a lot of fun. The fans are the best fans I’ve ever played for in the American league, (I) enjoyed them every night.”

The season included many firsts for the franchise: five Eagles scored their first career NHL goal, and four got their first taste of the NHL playing in their first game.

“I thought (the young guys) did good, when you look at younger players you want them to improve every year. From my estimate, I’d say every one of our young players improved and got better this year.” David Warsofsky

One pleasant surprise this year for the Eagles was the emergence of dynamic forward Logan O’Connor. After going undrafted in his three years at the University of Denver, the energetic winger tallied 42 points in 64 contests. Scoring 19 goals this season — three more than he scored in his time at DU — with five coming shorthanded.

Martin Kaut, the Colorado Avalanche 2018 first round pick, completed his first pro season in North America. The 19-year-old winger scored 26 points in 63 games and will look to build off his success heading into next season.

“I’m happy with this season,” Kaut said. “This is my first year (overseas) without my family, so it was hard for me, but (Francouz helped me). (In the) offseason I’m going to be working hard and hopefully, next year make the (Avalanche).”

Entering the season, the youthfulness of the group was a topic of discussion, with the average age of the team sitting at just 21 years old. The AHL serves as a direct pipeline to the NHL, one of the biggest measuring sticks of a successful season is how the young guys developed throughout the year.

“I thought (the young guys) did good,” Warsofsky said. “When you look at younger players you want them to improve every year. From my estimate, I’d say every one of our young players improved (through the year) and got better this year.”

The Eagles relied on Head Coach Greg Cronin, his experienced staff and the leadership of veteran players such as Warsofsky, Andrew Agozzino and Captain Mark Alt to guide the young team.

“I just (tried) to bring a leadership role every night,” Warsofsky said. “Be there when (the) guys need it, play my game and try to lead by example.”

Warsofsky is one of the five unrestricted free agents heading into the offseason. The Eagles have a total of 11 free agents who could be departing over the summer.

Many of the signings and re-signings will depend on the big club down south. The Avalanche currently have 13 players under contract heading into the summer and are sitting on just under $11 million in cap space and will have a projected $32.6 million heading into the summer free agency, according to CapFriendly. Some big name free agents for the Avalanche include JT Compher, Mikko Rantanen, Alex Kerfoot, Nikita Zadorov and Semyon Varlamov.

Depending on who the Avalanche sign or let go of, along with those on the Eagles, will shape how both clubs’ rosters look moving forward.

The Eagles added more youth at the end of the season, adding former 2017 first round pick Shane Bowers and 2017 fourth round pick Nick Henry to the roster. Both players will return next season as the Eagles try to build off their success this year and make their 17th straight playoff appearances in 2020.