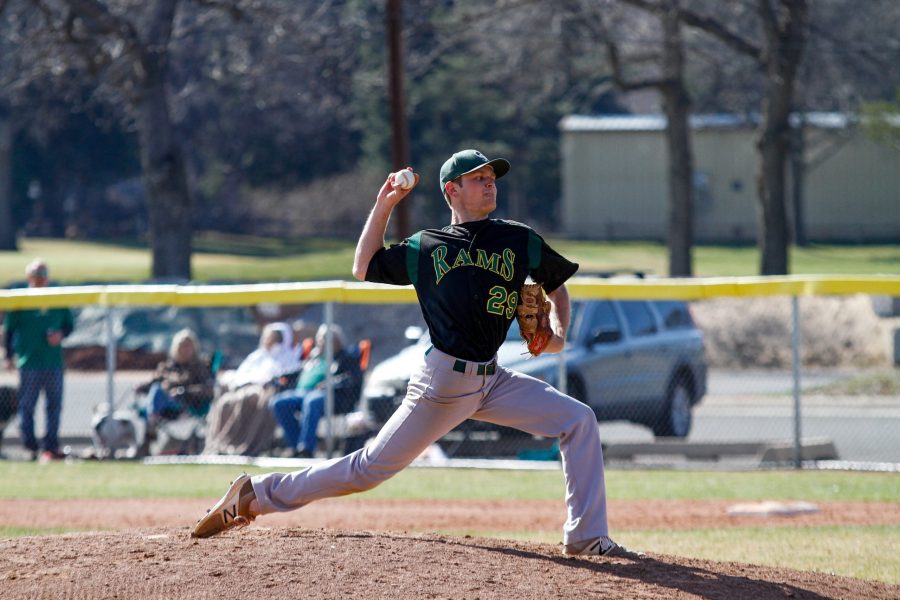 Jared Van Vark winds up to pitch during the game against the University of Northern Colorado March 31. The Rams beat the Bears 9-4 and 17-2 in back-to-back games. (Ashley Potts | Collegian)

From an early age, Jared Van Vark knew he loved baseball and that he would be playing it for a long time.

Van Vark started his baseball career at age five when he signed up for his local t-ball team. From that point on, he had ambitious goals.

“My high school program was pretty well respected around town so I knew from an early age that I wanted to play on my high school’s varsity team,” Van Vark said.

After high school, Van Vark had no plans to stop playing baseball. He was also very serious about school, so he did not want baseball to overcome his academics.

The 21-year-old right-handed pitcher is studying business administration with a concentration in corporate finance and investment analysis. Van Vark also is minoring in sports management and has a certificate of entrepreneurship.

“I just wasn’t ready to give up playing baseball so I came to club ball,” Van Vark said. “I wanted to keep playing baseball at a very competitive level but I didn’t want baseball to become like a job for me. I knew I wouldn’t enjoy the game anymore if I were dedicating every second of my free time to workouts and practice but I knew I was not done playing.”

Colorado State was appealing to Van Vark for a few reasons.

“I knew CSU had one of the best club baseball teams historically,” Van Vark said. “When I came to visit CSU I fell in love with the campus and the atmosphere of Fort Collins.”

While some view baseball as a drawn out, slow paced game that can get boring, Van Vark enjoys the mental chess match and focus the game requires.

“(Baseball is) competitive and strategic,” Van Vark said. “It takes a combination of preparation, skill and luck to have success. I love the team aspect, and how not just one player can carry a whole team.”

Van Vark has made many of his best friends through baseball. The bonds he forms with his teammates hold a deeper meaning for him than simply playing the game.

“I’ve played baseball nearly my whole life and my closest and strongest friends over time have all come from a baseball team,” Van Vark said. “It’s a lot more to me than just a game. It’s about a collective group of guys with similar interests all competing together and overcoming adversity along the way.”

Van Vark’s parents were the biggest influencers in his early career are still very supportive of him.

“My parents have always been extremely supportive of all aspects of my life, especially baseball,” Van Vark said. “My mom has been the biggest supporter of my baseball career, she is happy that I am still playing baseball and loving every day of it. She loves supporting the team and will probably be as sad as I will be when my (playing) days are over.”

When it comes down to it, it feels natural to be on the mound. I love the ability to compete on every single pitch. Jared Van Vark, senior pitcher

Van Vark, like most players, can pick out one moment in his career that stands out the most.

“It’s almost impossible to pick just one memory,” Van Vark said. “If I had to pick one; my senior year of high school we won Southern CA CIF which was the farthest my high school team could go. Not only did I play with a handful of my closest high school friends, but I truly liked every guy on the roster. It was one of the most fun and rewarding seasons of baseball I have ever had, ending in just the perfect finish.”

Coach Troy Tolar has his own favorite memory of Van Vark, and it was a crucial moment in a big game.

“My favorite memory of Van Vark was his freshmen year,”  Tolar said. “We went to regionals, he had kind of been up and down pitching all year and we had our backs against the wall. We lost our first game so he had to come out and pitch in the championship game in regionals. He threw a nine-inning complete game to send us to the World Series.”

Van Vark is one of the team’s best pitchers, and unlike many pitchers, he also gets the chance to step in the batter’s box.

“I enjoy them both equally for what they are,” Van Vark said. “I was a pitcher only in high school, so I appreciate every at bat I get. (I) love hitting at batting practice every day, since I had to watch everyone else do these things in high school. But when it comes down to it, it feels natural to be on the mound. I love the ability to compete on every single pitch.”

Pitching Coach Chris McIntosh thinks Van Vark is a dedicated student of the game and a great pitcher too.

“He’s really coachable,” McIntosh said. “This week we were working on mechanical stuff. He’s always coming to me with stuff to work on, and I think our guys feed off that too. Like I said we worked on a little tweak in his mechanics this week and I think that helped him out a lot.”

“You know he’s been one of our best arms since he’s been here,” Tolar said. “We really rely on him to be a guy that whenever we put him out there he’s going to get the job done and carry us to a win. We need him on the mound.”

“He’s one of the leaders on the team,” McMillan said. “Definitely more of the vocal guy. He’s huge for us.”

When Van Vark graduates in May, he has some big plans.

“I will be working at the Denver Branch of the Federal Reserve Bank of Kansas City as an assistant examiner,” Van Vark said.

Van Vark is going to leave CSU in a few weeks, but he will leave behind him some great memories with the baseball team. He has left his footprint on the team, and left big shoes to be filled on the mound.

“He’s thrown two no-hitters in his career,” McIntosh said. “He threw one last year and he threw one the year before, so I would say those are my favorite memories of him. Really, it’s just an overall bulldog mentality that he has on the mound that we’re definitely going to miss once he’s gone.”