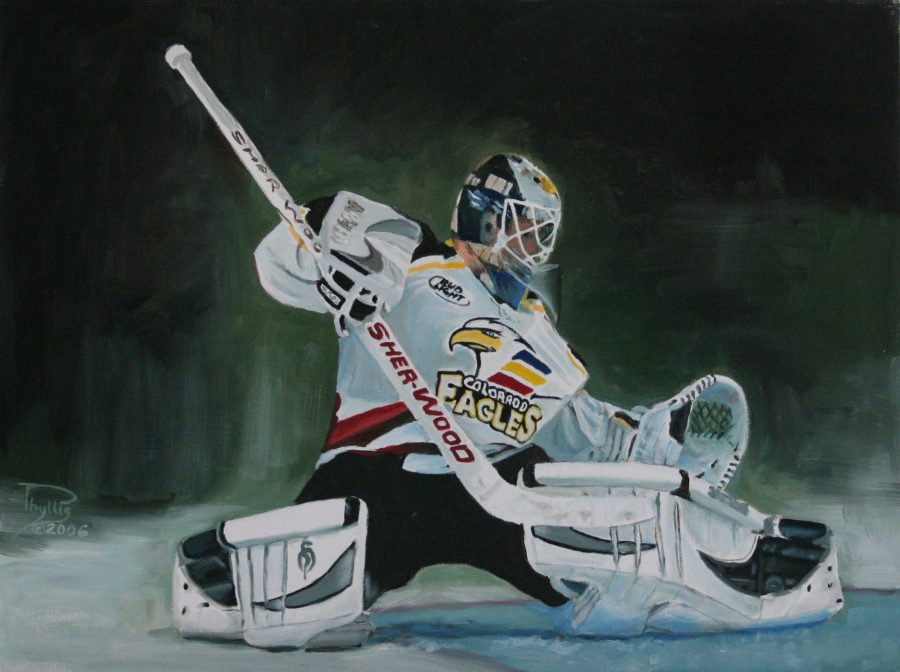 They say a picture is worth a thousand words, and when you’re able to capture the essence of a game as chaotic and beautiful as hockey, you’re really going to have a mouthful when asked to describe it in a painting.

Phylis Perry has been recreating hockey memories for over 20 years. What started as a personal hobby has gone from hanging her paintings in her living room for fun, to professional hockey players decorating their own homes’ with her work.

“I grew up in Minnesota, which accounts for my interest in hockey,” Perry said. “The paintings were a way for me to say things to these (players) I never could.”

The 77-year-old Chicago native first started painting in the 1990s after she relocated to Denver in 1983 with her late-husband William. Perry was ecstatic in 1996 when the Quebec Nordiques franchise relocated from Quebec City to Denver for the 1995-1996 season.

“We were here when the Avalanche came and I insisted that we had to go,” Perry said. “(My husband and I) shared season tickets (with our son) and we were treated to a couple (of) Stanley Cups.”

The Avalanche won two cups in their first six years in Denver, Perry and her husband worked in the tech industry and with retirement approaching she needed a way to occupy her free time.

“Right about that time I started to think about what I (was) going to do when I retire,” Perry said. “I was lucky enough to be comfortable and didn’t have to work during retirement. (I had) a friend that taught painting and she taught me how to paint.”

Just getting started as an artist, Perry saw a chance to paint her favorite players on a canvas, combining her passion for hockey and a newfound passion for art.

“I started with the Avalanche players,” Perry said. “At the time there was a lot of news coverage and photos of the players were easily available so I started (painting) those guys. Then the Eagles showed up in Loveland and I’ve been painting them ever since, so that’s been over 15 years.”

When the Colorado Eagles franchise was established in 2003, Perry had relocated to Loveland and began painting members of the team. Still mastering her technique, Perry recalls struggling early on with her photography and painting skills. She had doubts in her abilities as an artist.

I was just blown away and then I heard her story that she did these paints for every single player on the team and people throughout the staff she’s done. It’s just an incredibly generous thing that she does with her incredible skills.Kevin McGlue, Colorado Eagles Media Relations Director and Broadcaster

“My first efforts weren’t terrific,” Perry said. “But I was determined and as time went by, technology blossomed. I was able to take pictures with better lighting. All of the sudden — boom — everything started to fall into place and it was much easier, and more fun in some ways.”

Eagles legend Greg Pankewicz heard about her artwork through the grapevine during the offseason while playing in a recreation-league game.

“It was summer time and in the offseason,” Perry said. “So he wasn’t under contract and he was in a rec-league game and not wearing any (eagles gear). One night I had done a painting for a friend of mine and he showed it to Greg (Pankewicz), and he came looking for me.”

Perry recalls pulling out of the parking lot and a crowd of people, including Pankewicz, all yelling at her to stop her car. Thanks to the encouragement of Pankewicz and other Eagles players like Brad Williams, Perry was able to perfect her skills and became comfortable giving her artwork to the players.

“I think I met Phylis for the first time back in 2008,” said Eagles Media Relations Director and Play-by-Play Broadcaster Kevin McGlue. “I was just blown away and then I heard her story that she did these paints for every single player on the team and people throughout the staff she’s done. It’s just an incredibly generous thing that she does with her incredible skills.”

Each season Perry paints a portrait for each member of the Eagles team, and the players are always at a loss for words when she delivers them.

“I got one last year in the playoffs,” said forward Julien Nantel, who played on the team last year while in the ECHL. “It’s very nice, she’s (a) very good artist. I have (the portrait) hanging in my home, and my parents really love it.”

Word of Perry’s work spread to the big league with players in the NHL inquiring about her artwork. She painted a portrait of the NHL’s Benn brothers, Jamie and Jordie Benn, and has done work featuring other NHL alumni.

It usually takes Perry a few weeks to complete one of her portraits, she then coordinates with McGlue to drop them off to the players, usually during a weekday practice.

“Phylis will usually come by our office and she’ll have 2-3 paintings,” McGlue said. “At that point I usually ask her if she’ll come to practice with them, because I wanna make sure the guys get an opportunity to say thank you to her in person. We get the first look at those paintings when they’re done. Every time we look at (them) it’s just jaw-dropping to see how incredibly talented she is and how impressive the paintings are.”

Perry’s work never fails to put smiles of the face’s of Eagles players and staff members.

“We’re really lucky to have her here,” McGlue said. “I know the players are excited, and they’re blown away when they see the finished product. They’re not really expecting it, some of the guys are hoping for it once they see that they come. For somebody to have that skill and share it with the team that they love is a real blessing for us.”