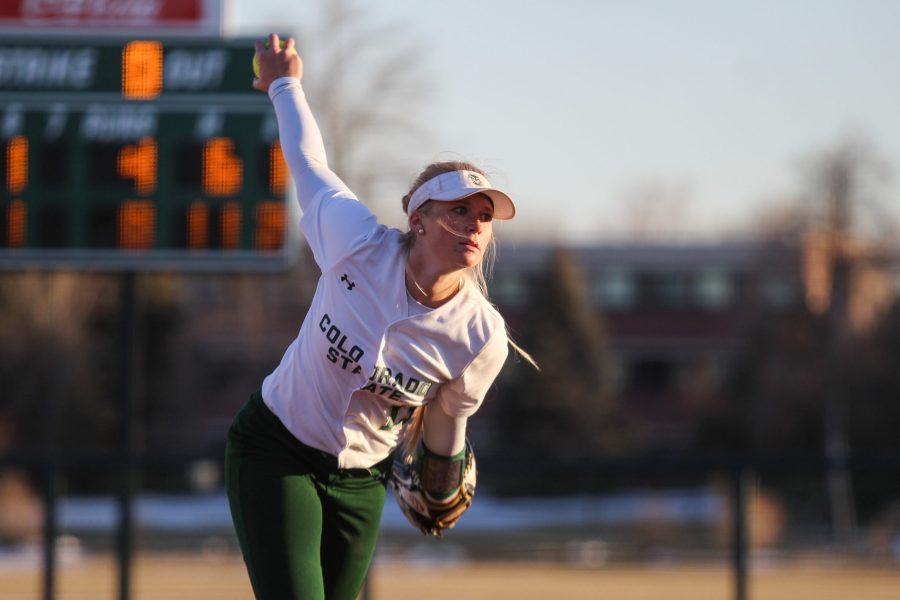 Bridgette Hutton winds up for a pitch during the game against Fresno State March 15. (Ashley Potts | Collegian)

Very few athletes at Colorado State University have a bloodline connecting them to their sport, but Bridgette Hutton is one of the few who do.

Hutton, the softball team’s senior pitcher, comes from a softball background. The game has always been a huge part of her life. She grew up watching her older sisters Taylor Hutton and Haley Hutton play softball. Her mother, Christine, and both her sisters played softball for CSU.

The combination of her family’s support and her love for the game are the reasons why she’s playing Division I softball today.

“I knew I wanted to play softball when I was four,” Hutton said. “I watched my sisters play t-ball, and I was like, ‘Wow, I really want to do this.’ Something about watching the pitcher throw sparked something in me, and I knew I wanted to try pitching.”

Hutton fell in love with the sport early, but insisted that she could have been successful at anything because of her mother’s support.

“My mother let us do whatever we wanted to do,” Hutton said. “If we wanted to dance, she would’ve let us dance, or if we wanted to play volleyball, she would have let us. Of course we did other sports, but I think that softball was in our blood.”

As Hutton got older and started to do more softball-related activities, she knew her love for the game was getting serious and that she really wanted to play competitively.

“It began when I was in middle school and when I had just started doing pitching lessons,” Hutton said. “Everything built up from there. I would go to practice, then to pitching lessons and then I started playing club ball and then competitive ball.”

When she reached high school, it started to become clear that she could have a future in softball and could play in college.

“When I started to get recruited in high school, I thought about where I wanted to go to school,” Hutton said. “At that moment it hit me. … I want to play softball in college. I thought about all the times I watched my sisters and all the stories I heard about my mom, and CSU was my number one choice. When the CSU coaches came to watch me at state my freshman year in high school, I was so nervous. That moment was surreal to me, but I wanted to do this. … I wanted to play Division I softball.”

As Hutton made the transition from high school ball to playing at CSU, her sisters were there to help her each step of the way.

“I was really nervous coming in,” Hutton said. “After watching my sisters play, I realized that college ball is really competitive. My older sister, Taylor, always gave me advice, and I had my other sister, Haley, on the team with me. … They helped me with the transition, and that was really nice.”

The moment Hutton realized she had what it takes to play ball collegiately happened early in her college career.

“My freshman year, we were in the Mary Nutter Classic, and I was pitching against the University of California. We lost the game 2-1, but that was the most fun game I’ve ever played in and the game where I knew I could compete at this level,” Hutton said. “I always (refer) back to that game when I’m having trouble.”

As Hutton moved into her sophomore season, she knew that she still had a lot to learn.

“Sophomore year was still a learning curve,” Hutton said. “I was still trying to get my foot in the door, but I had more confidence in myself going into the season.”

Her junior year was the start of something special. She had confidence and experience on her side, which helped her start to come into her own.

“Junior year I felt this overall strong mentality about myself, and I learned a lot through Coach (Dedeann) Pendleton-Helm and how to get stronger mentally,” Hutton said. “I started doing visualizations to help the mental side of my game. I knew I had the physical part, but the mental part was holding me back.”

As her final season began, Hutton became a leader on the team, and she knew that there were great things in store for this season.

“This team is so special, and I felt that coming into our fall season,” Hutton said. “I knew that it was going to be different this year because it was kind of a change in mentality. We needed to be strong mentally and know that we can do this. It’s been super fun with this team. We’ve shared some great memories this year and accomplished so much, and I couldn’t be more proud of this team. … Our key components this season are pushing each other, wanting to get better and wanting to learn more.”

As one of the leaders of the team, Hutton has contributed mightily to the Rams’ best season in 30 years. She’s been instrumental in that success. The team is 13-3 when Hutton is pitching. She has pitched 119.1 innings so far this season, in which she has an earned run advantage of only 2.46 and 75 strike outs. She even threw her first career no-hitter earlier in the season.

After nearly four years of strong play, Hutton still credits her family in her success. She said she is grateful for her family and all the support they have given in her career.

“My family has meant everything to me throughout my four years,” Hutton said. “Going back in the day to when my grandpa was the athletic trainer (at CSU) for 31 years and my mom and dad met here. … All of us have been here. They’ve supported me no matter what throughout my four years. They tell me to do me and they support me no matter if I have a bad day or a good day, and that’s big. They’ve been my strong suit these last four years, and I couldn’t be more grateful to have played with Haley and to have that support system. Having them by my side has really helped me.”