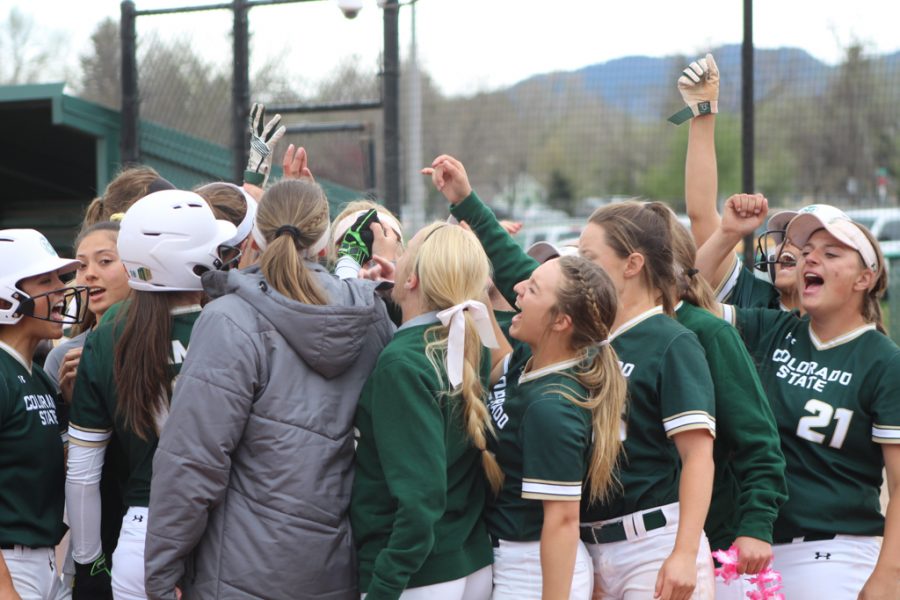 The Rams celebrate after Kaitlyn Cook his a walk off run to give them a victory over San Diego State and secure the series win 2-1. (Joshua Contreras | Collegian).

After an emotional and bitter sweet final home series against San Diego State, the Rams are one win away from securing their second Mountain West Championship and tying the best record in CSU softball history.

The series kicked off Friday as the Rams looked to take care of business on their home field one last time. The Rams started early, scoring four runs in three innings. They continued their offensive tear, adding three more runs in the fifth inning and eventually ending the game with a walk off home run in the sixth.

The Rams took game one in a 9-0 run rule finish and looked to continue the success on Saturday in game two.

Game two got off to a slow start for the Rams. The Aztecs jumped out to an early 2-0 lead after two innings. The Rams knotted the game at 2 with a run in the third and fourth innings.

In the fifth inning, the Aztecs regained the lead with three runs and jumped ahead 5-2. Not only were the Rams down in the game, but they were also down a player. Junior Corina Gamboa left the game after getting hit in the face with the ball off the bat of an Aztecs player. Freshman Kaitlyn Cook took over at third base and made an immediate impact.

Not only did Cook field the ball and throw the runner out on her first play in the game, she also picked up her first career hit in the sixth inning that scored a run.

Down by two runs in the seventh inning, the Rams fell short of a comeback, only pushing across one run. With the series tied 1-1, the Rams looked to finish the Aztecs off in game three.

Sunday was senior day at Ram Field. Seniors Amber Nelson, Bridgette Hutton, Danni Klein, Isabella Navarro and Lauren Buchanan were honored on the field before the game. This would be that last game they would play in front of their home fans in Fort Collins and they planned to go out with a bang.

“Celebrating this senior class was something that we were all looking forward to,” Klein said. “Being together and celebrating what we’ve accomplished was really awesome.”

After some back-and-fourth in the first four innings, the game was tied 3-3. Both teams kept each other in check in the fifth and sixth innings until the Rams came up to bat in the bottom of the seventh.

Cook stepped up to the plate looking to finish the game. The crowd got loud due to the magnitude of the situation. Cook lined the ball to center, scoring a run and ending the game.

Celebrating this senior class was something that we were all looking forward to. Being together and celebrating what we’ve accomplished was really awesome. Danni Klein, senior outfielder

Celebration broke out on the field as her fellow teammates swarmed her, lifting Cook into the air as if she was a trophy. It was bittersweet that on senior day, a freshman rose to the occasion to lift the Rams to a win.

“I had a good feeling when Kaitlyn was coming up to bat and I knew something good was going to happen,” Nelson said. “She works so hard and she deserves it … It’s great to see the future of this program and it’s going to be fun to watch her play in a couple of years.”

This group of seniors had played for each other every single time they’re on the field. They consider each other family rather than teammates.

“It’s been a great ride… We really bond well together and we want the best for each other,” Buchanan said. “It’s been awesome to have the support and belief in one another.”

The group has great chemistry, despite their differences. That has helped them lead the team this year.

“We definitely have amazing chemistry,” Hutton said. “We all lead in different ways and that’s what makes this team go round. We have each other’s back and we come out here and work hard everyday.”

The seniors are proud of the work they have put in as a team and for each other.

“We’ve left our blood, sweat and tears on that field and I’m so proud of my teammates,” Nelson said. “They’re like my sisters and we can count on each other for everything.”

After the successful home stand, the Rams will head to Boise, Idaho to take on the Broncos next weekend. They look to lock up the Mountain West and top the team’s best record in history.