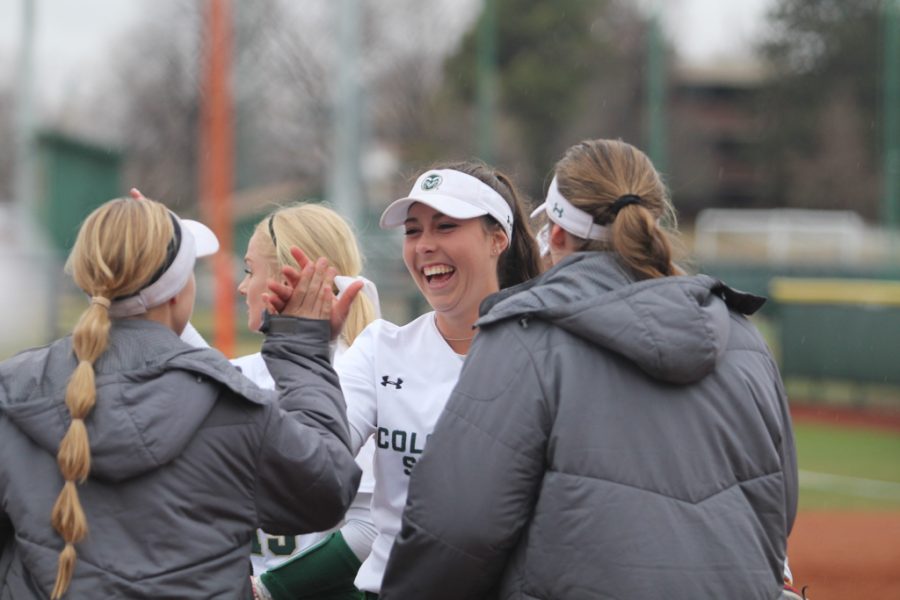 The Rams catch a laugh during a quick timeout during the CSU vs. Utah State game on March 29th. (Joshua Contreras | Collegian).

After a wild extra inning win against the University of Northern Colorado, the Rams were eager to return home to host conference foe Utah State in a three-game series.

The Rams have been on a historic run as of late. Their 18-game win streak brings their season record to 27-4, marking the best record the team has posted since 1989. This is a huge accomplishment for the Rams and they are no where near finished.

Utah State came into the weekend’s contest with an 11-14 record on the season. The Rams knew they needed to handle their business and perform in front of the home crowd.

The first game of the series took place March 29. The Rams came out red-hot early, scoring five runs in the first inning. It looked like a blowout from the start, but the Aggies had other ideas.

The Aggies went on to score seven unanswered through three innings and took the lead 7-5. Play was stopped in the third inning due to rain and rescheduled for Saturday before game two.

When play picked up on Saturday, the Aggies added two more runs making the score 9-5. The Rams were in a bit of a hole, but found a way back into the game with two runs of their own.

After giving up another run in the fifth, the Rams were down 10-7. If the Rams wanted to keep their streak alive, they needed another miraculous comeback.

So, the Rams responded with four straight runs in the fifth to take the lead 11-10. They shut down the Aggies defensively the next two innings to remain victorious. Finding a way to win games is the story of the season for the Rams.

“We believe in each other and we play for each other,” senior Danni Klein said.

After a short intermission, both teams were back on the field for game two. After a slow start, the Rams found themselves down 2-0 through three innings. They were able to take the lead 3-2 after a three run fourth inning.

The Aggies added a run of their own to knot the game at 3-3 in the fifth inning. From there, the Rams took over with another three-run inning in the sixth. They managed to keep the Aggies off the score board and finished the game in the seventh inning.

“We don’t settle for winning series,” senior Isabella Navarro said. “We always push for the sweep.”

With one game left in the series, the Rams took the field on a beautiful Sunday afternoon looking to put the Aggies away once and for all.

The Rams exploded for eight runs in the first inning. The excitement came from a solid chain of events started by a double from Haley Donaldson that scored Ashely Michelena. Then, Tara Shadowen stepped in with a big hit out to center field that scored Donaldson.

Navarro stepped in and hammered her third home run of the season, adding three more runs to the board on the 3 RBI hit. The Rams started their batting order form the beginning again allowing Michelena to score Jordan Acosta and put Danni Klein on third. Donaldson stepped up for another double to score Klein and Michelena before the Rams’ offensive barrage was finally brought to a close.

They led the Aggies 8-1 after just one inning. Though the Rams’ scoring would end there, the team remained in control throughout the entire game. After giving up one run a piece in the last three innings, the Rams finished the game in the seventh inning by the score of 8-4.

The Rams completed the sweep and extended their win streak to 18 games. They also finished undefeated last March.

“I’m really happy for this team because they care so much about one another and representing their school,” Head Coach Jen Fisher said. “Let’s enjoy this victory this afternoon and get back to work.”

The Rams head to San Jose to take on the Spartans in a tough three game series next weekend. The Spartans have won 12 of their last 13 games and are currently fourth in the Mountain West standings.

Junior Guererro can be reached at sports@collegian.com or on Twitter @juniorg45.