Rams fight through adversity in first-round exit behind homebound transfer 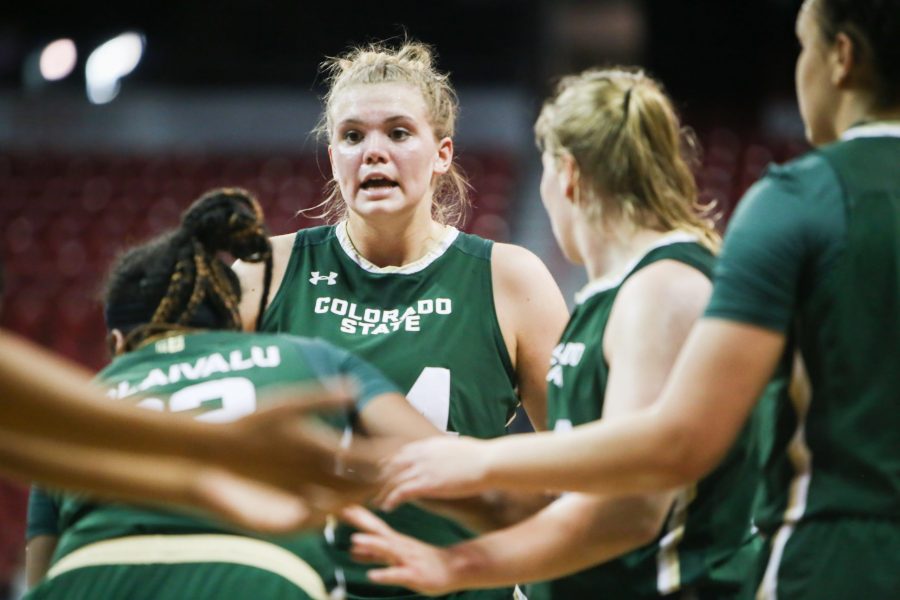 Mollie Mounsley looks towards teammates after the Rams scored a free throw during the first round of the Mountain West Tournament against Utah State on March. 10. (Tony Villalobos May | Collegian)

Through the postgame emotions, a byproduct of their hard loss, a message echoed throughout Colorado State. If they were going to go out, they were going to do so with a fight, scraping and clawing until the final seconds ticked off the clock at the Thomas and Mack Center.

Despite a lackluster first half featuring a nine-point opening stanza, Ryun Williams’ team did just that, showing the energy that evaded them for much of the year in a 62-59 loss.

The loss served as a first-round exit in the Mountain West Tournament, but behind the push of their departing leader, Tatum Neubert, the team battled.

“If we were going to go out anyway this is the way we wanted to go out. We gave everything we had,” Neubert said. “I (couldn’t) ask for a better team for my last season.”

Neubert finished with 13 points on 3-of-7 from the field, one point shy of Lore Devos’ team-leading 14. The score was merely secondary to the impact Neubert made daily, something that will be missed in the Rams locker room.

“Tatum was a great teammate, I loved playing with her,” Myanne Hamm said. “She brought a lot off the court. She (used) her voice very well… just helping keep us motivated and keep us together… She was a really special leader and I’m proud to call her a teammate.”

After a run to end the third quarter, the Rams finally took the lead. Trailing for the first 29 minutes of the contest, the one-point margin heading into the final stanza was filled with hope. A Mollie Mounsey 3-pointer served as the catalyst for the lead and a leading cause for the sudden shift in momentum.

We put ourselves in a position to win the basketball game and I’m proud of our kids for that.Ryun Williams

Then, behind a charge from USU’s star, Shannon Dufficy, the lead eviscerated. Before the spree, she was 2-of-9, five points to show for her efforts. Along with breaking her slump, the Rams faltered on the glass.

“(Shannon) Dufficy made some tough shots, but the (offensive) boards got us,” Williams said. “They rebounded the ball extremely well and I think that’s kind of what got us. Hats off to Utah State (and) Dufficy, she’s a big-time player.”

Once again, the 11-0 run to begin the final period notwithstanding, the Rams answered. Fighting a double-digit deficit, they charged back, this time behind the efforts of Grace Colaivalu. After a season of struggles, the guard exemplified what has made her a sparkplug for the program in her tenure at CSU.

En route to doubling her point total in the final quarter alone, Colaivalu rattled in multiple contested looks at the rim. With the opportunity to cut the lead to three in the final minute, another hiccup.

At the free-throw line, Colaivalu double clutched, turning the ball over to the Aggies and setting her team back once again. The subsequent possession redeemed the guard as she tallied one of her three final period assists, with Devos’ layup cutting the margin to two.

With merely 11 seconds left on the clock, the Rams trimmed the deficit to one, with an intentional foul bringing the lead for the Aggies back to three with one possession left for the Rams.

Without a timeout, the Rams were forced to go the full length of the court in eight seconds, a drive that resulted in multiple seconds in range for a final heave. The problem: the possible game-tying shot never left the hand of Neubert.

The comeback from down double digits ended unceremoniously, the Aggies defense stunting the Rams chances.

“Obviously I should have gotten a shot up. But I think that it doesn’t come down to one last play,” Neubert said. ”I think it comes down to all of the other plays that were made throughout the game that we could have finished and we didn’t.”

The Rams finished the year 8-22, with a conference mark of 2-17 after the loss to the Aggies. In the end though, the team’s biggest loss wasn’t the game, but the loss of the star that chose to return home for her final year.

“I’m just happy that Tatum chose to be a Ram,” Williams said. “She’s been at a couple (of) other schools, and I’m glad… I’m proud that we get to call her a Ram and that she finished up as a Ram.”

After losing a majority of their games, the Rams ended the year on a positive note.

“We put ourselves in a position to win the basketball game and I’m proud of our kids for that,” Williams said.