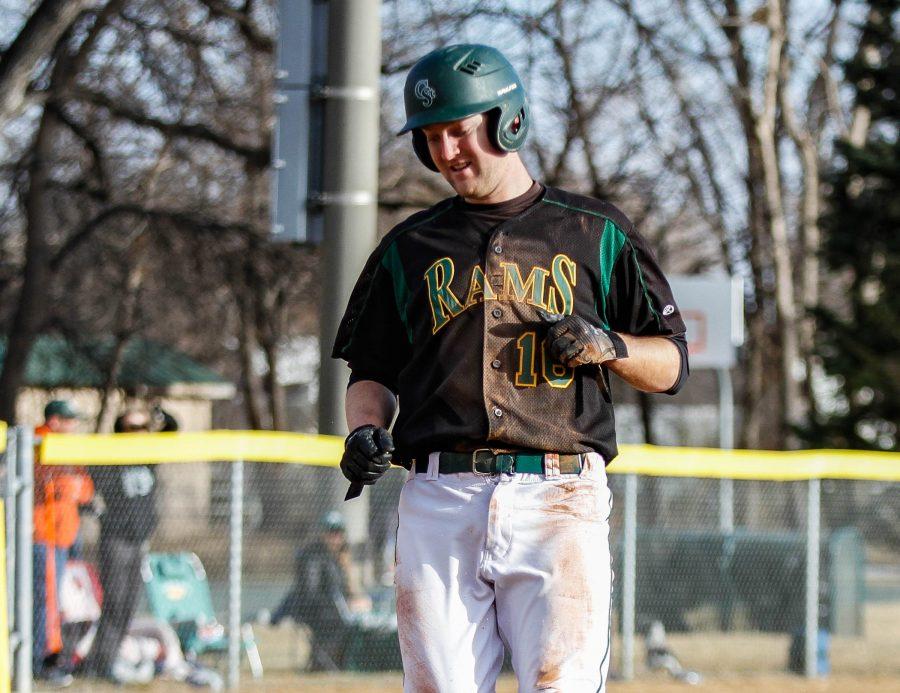 Trent Weldon crosses home plate after a diving effort to get to third during the first game against Colorado School of Mines. The Rams beat the Orediggers 6-0. (Ashley Potts | Collegian)

The Colorado State University baseball team dominated the Colorado School of Mines in the first league series of the season, winning 6-0 and 14-1.

CSU was scheduled to play Saturday and Sunday, but were forced to cancel the Saturday game due to snow and fit  a triple-header game on Sunday. CSU was not able to fit in a third game and had to cut the second game of the day to five innings.

CSU shutout Mines in the first game, winning 6-0. Shortstop Trent Weldon played a key role in the first game. Weldon went 1-2 with a strikeout and a walk. His one home run was an absolute missile to dead center. Weldon’s home run came in the top of the third inning and marks CSU’s first home run of the season.

“It felt really good,” Weldon said. “I wasn’t even trying, I was just trying to get a base hit. I got a really good pitch down the middle, so I drove it where it was pitched and got good success out of it.”

Another key contributor of the first game was pitcher Blake Buhrer. Buhrer was a force on the mound as he threw six shutout innings, with nine total strikeouts, allowing only three hits and no walks. Buhrer tossed 83 total pitches, including a 10-pitch third inning. Out of Buhrer’s nine strikeouts, six of them were in the first three innings.

“I felt confident,” Buhrer said. “I felt like I had a good chance to throw a good ball game today and I did. … Really just trusting my mechanics and my arm, just not thinking much.”

CSU put together an offensive onslaught in the second game of the series. CSU had a combined 14 hits and tallied 14 runs in just five innings. Weldon fed off his first game and put together a 3-3 game and hit two RBIs in the process.

“I was seeing the ball a lot better today,” Weldon said. “I’ve been struggling a little bit in the past, but today I broke out of it and was able to see some good pitches and stay back on some curveballs and fastballs.”

The CSU pitchers were on a roll. Jared Van Vark got the pleasure of pitching the second game, and he made the most of it. Van Vark threw 83 pitches, including 10 strikeouts and one walk. Van Vark allowed six hits and one run in five innings.

“It felt good,” Van Vark said. “I’ve been a little bit shaky my past performances so I was really looking to get out there and throw strikes.”

Although the Rams were unable to practice much leading up to the series because of the snow, lack of practice did not seem to impact CSU.

“We didn’t really get to practice,” Coach Troy Tolar said. “We practiced once inside and with snow, (and) we had a parking lot practice on Friday. One thing I have noticed about this team is they just love being around the game. Even when we are practicing in the parking lot and it’s cold, they’re still out there having fun and working hard.”