CSU challenges the top team in the conference, falling in overtime 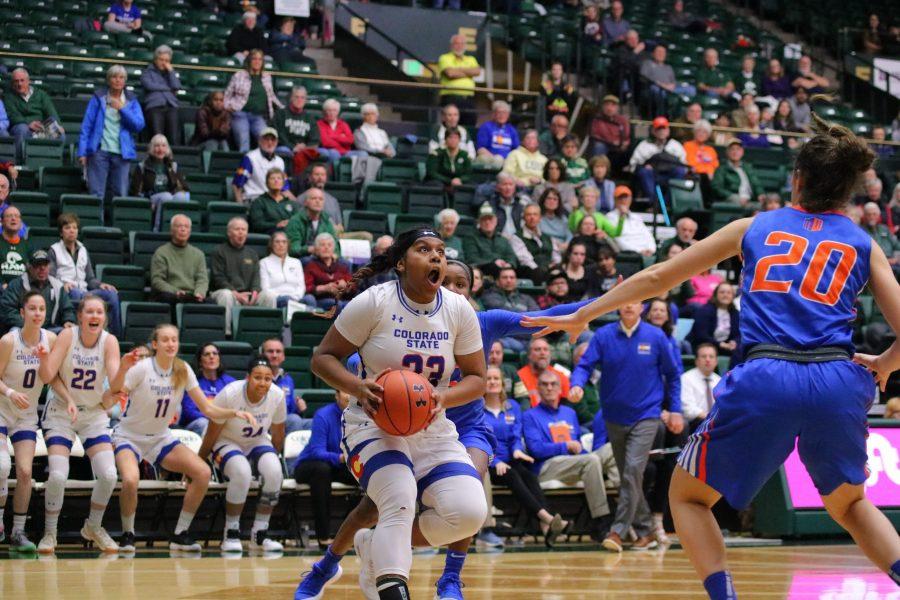 Grace Colaivalu(23) drives towards the basket and prepares to shoot the ball, as Colorado State takes on Boise State at home. CSU falls short in overtime 72-63. (Devin Cornelius | Collegian)

Six out of the 17 turnovers from the Rams contributed to a snowball effect that left the Rams unable to bounce back, despite taking the Broncos into overtime, eventually falling 72-63.

The Rams had a fast-paced start in the first quarter with Grace Colaivalu sending an on-target pass to her teammate Lore Devos under the basket.

“They’re first in the league so we knew they were going to come out harder,” Devos said.

Although the quick pace stunned the Broncos in the first few minutes, Colorado State University made two mediocre attempts to pass to Colaivalu that put them in a temporary funk. The Broncos took advantage of the opportunity to create an early lead with baskets that put them in the lead.

Colaivalu responded with aggressive drives underneath the basket and fought on the ground for a jump ball to compete with the constant pressure from Boise State.

In the second quarter, the Broncos fought to keep control of the momentum in their favor. After Coach Ryun Williams called for a timeout after the first three minutes, Tatum Neubert scored a basket to momentarily counter Boise’s energy. Devos put more points on the board for CSU with three additional baskets. There was no apparent sign of the Rams backing down from the lead the Broncos were maintaining.

Mollie Mounsey swished her third 3-pointer of the game that tied the score at 26 for both teams. She scored 17 points and was the leading scorer for the Rams.

Though the Rams refused to be taken down easily, the Broncos quickly responded and kept the gap of five points to conclude the second quarter.

“I think we just get in our own heads … and sometimes it takes a little while longer to move onto the next play,” Colaivalu said.

The mistakes the team had encountered early on continued to put a mental strain on the team’s energy.

Coming out of halftime, Neubert forced the Rams to compete by supporting the team offensively and setting the foundation for a hopeful comeback.

Mounsey contributed two free throws to the scoreboard and Devos accounted for two baskets of her own. Devos scored 16 points for the team overall.

In the third quarter, the Rams scored 12 points in total with Colaivalu scoring a layup in the last few seconds of the period.

With five points away from a tie game, Myanne Hamm aggressively got her hands on a risky ball that the referees called for a jump ball.

Less than five minutes left in the game resulted in a controversial foul call against Hamm.

Regardless, the Rams made their comeback with only one point away from a tie game, 51-50.

CSU’s energy was almost tangible, and any hesitation they might have experienced prior was gone with only two minutes left, the gap up to seven points.

With 40 seconds left in the last quarter, Colaivalu made all four of her free throws, hinging from defensive fouls from the Broncos, leaving the score at 57-54.

Williams called a timeout with 30 seconds remaining in the game. Out of the timeout, the Rams stormed back behind a tough layup from Colaivalu with two more free throws.

The Broncos were fouled by CSU, but only made one of the two free throws. Colaivalu fought harder than anyone to make yet another basket and tie the game, 59-59.

The Rams’ defense, acting as a stone wall against the Broncos, prevented them from scoring before the clock ran out. The Rams headed into overtime with high energy and determination.

Colaivalu confidently scored the first basket in overtime, putting CSU ahead for the first time all game, 61-59.

With 45 seconds left in overtime, the Rams called a timeout but they were trailing by three points. Boise challenged CSU with several baskets of their own with and ended the game unceremoniously with a nine-point margin.

CSU will look to counter their sixth-consecutive loss against New Mexico Saturday at 2 p.m. The game will serve as Senior Day for the graduating Rams.