Santistevan: 5 basketball players that have captured the Moby faithful 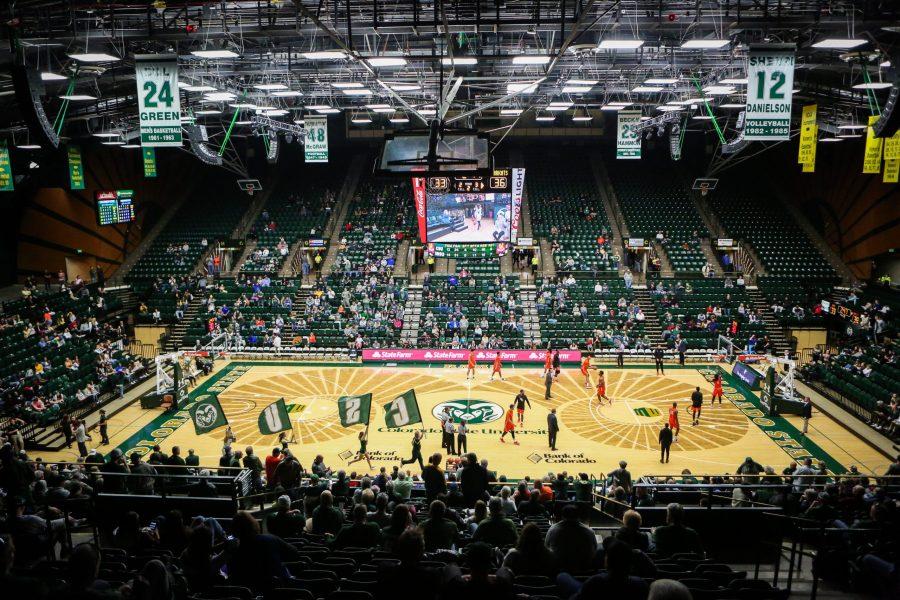 Fans cheer them on, yell at them and shed tears when they retire. The connection between fans and players is one of the most unique things about sports. It makes fans feel like they are a part of the team as if they have a personal connection with that player.

All these factors lead to fans falling in love with players. Not because they actually love them but because they have built a bond with that player throughout the years.

Several of Colorado State men’s and women’s basketball players have that connection with the Ram faithful, whether that be because of watching them all four years, their personality or just being a hometown kid.

To celebrate Valentine’s Day, here’s a list of the most lovable players that call Moby Arena home.

Some people would say falling in love with someone requires two things: growth and loyalty. Nico Carvacho has reciprocated both traits to the CSU fan base.

Coming to Fort Collins, Carvacho wasn’t a sought-after recruit for many Division I programs. He was a former-soccer star turned basketball player. In his redshirt freshman season, Carvacho was an unpolished center who struggled to make baskets.

Two years later, he is now the focal point of the Rams’ offense.

Fans have been able to see Carvacho turn into CSU’s all-time rebounder and with another year to play, Carvacho has a real shot to break the Mountain West all-time rebounding record as well.

As in most relationships, loyalty is a staple. After the head coach that recruited him left CSU, Carvacho flirted with the idea of transferring. He ultimately decided to remain loyal to the program that gave him a chance, which is why he has become one of the most loved players in the fans eyes, especially his number one fan, Bryce Krisl.

Sometimes you just fall in love with someone’s personality and heart. That’s the case with the fans and Grace Colaivalu.

Despite being in her redshirt sophomore season with the Rams, Colaivalu has quickly become a fan-favorite in Moby Arena. She often has the biggest smile on the team and looks determined to win at all costs.

Colaivalu makes it easy for fans to like her because of her constant smile, vibrant personality and calmness. Colaivalu’s personality has been shown in the past three games more than ever as she’s been out with an injury. Regardless of her situation, Colaivalu has remained on the Rams sideline like the biggest cheerleader and supporter through it all.

The guard has even broken out dance moves on the sidelines for volleyball games – a true Ram.

Finding commonalities in someone helps form a bond that can eventually lead to love. Coming into CSU, J.D. Paige and the Moby Faithful already had a couple things in common that sparked an interest.

Paige was born and raised in Denver and attended Rangeview High School in Aurora. His grandfather played basketball at CSU from 1976-1978 and was eventually drafted by the Los Angeles Lakers.

The “hometown” kid is familiar with the Centennial State and had green and gold inside his blood from birth.

Recently, he even tallied his thousandth career point, an accolade rarely accomplished in program history.

Every typical love story often concludes with the couple who grew up together falling in love with each other. CSU fans can relate to the cliché love story with their love for Myanne Hamm.

Hamm played high school basketball ten minutes away from CSU at Poudre High School where she was a two-time team captain.

She holds the field goal percentage record at Poudre where she shot 55 percent her sophomore season.

Whenever the lights dim at Moby and introductions are underway the crowd seems to get a little louder when Hamm is announced. Luckily for the fans, Hamm is going to be around for a while longer.

One of the biggest things to falling in love is patience and fate. The Moby faithful and Adam Thistlewood were a match that wouldn’t have happened without a little bit of both.

Thistlewood was born in Denver and played high school basketball in Golden. CSU offered him a scholarship, but he committed to Drake University instead to play for Head Coach Niko Medved. A few months later, Medved left Drake for CSU and Thistlewood followed.

The true freshman is averaging 7.8 points, 2.8 rebounds and 27.6 minutes a game, but it’s not his stats that captured the fan’s hearts.

At the beginning of the season, Thistlewood was falling all over the court to make a play. He is the type of player that plays 100 percent every night with a high-motor.

At one point, he was sporting a bandage and bruising on his face, a true iron man.

Thistlewood’s love in Moby can be best measured by how loud the arena gets when he knocks down a shot.

The next three-plus years will only harness that love further.