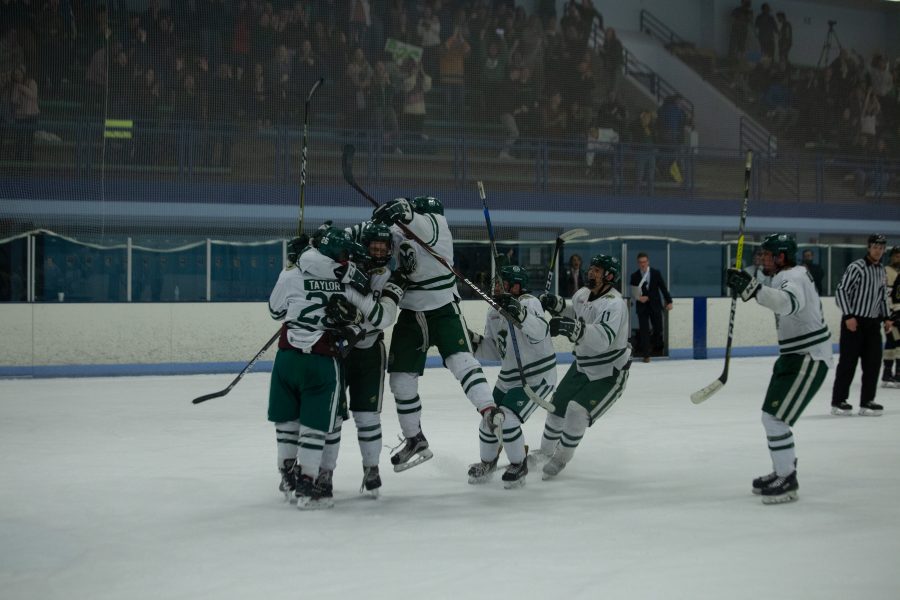 The Rams team celebrates their vicotry in the last 5 seconds of overtime. During overtime, the Rams goalie stopped several shots that could have meant the end of the game but he enabled the Rams to play on and win. (Josh Schroeder | Collegian)

Anytime Colorado State University and the University of Colorado, Boulder are used in the same sentence, you can bet there’s gonna be trouble. Saturday night at Edora Pool Ice Center was no different as CSU men’s hockey hosted CU on senior night. As is typical in rivalry games, the building was packed for the last rivalry matchup of the season.

The two teams met in Boulder the previous night and the Buffs were able to come out with the victory in overtime. CU scored with .34 seconds remaining in OT to ice the game, and get their second overtime victory over the Rams this season. CU led the season series 3-0, winning Friday night and taking both games last semester. CU won 8-3 in a blowout at Pepsi center Dec. 2 and at EPIC Nov. 30 where they again won in the last minute of overtime, 3-2.

The game started with the Rams honoring their five seniors who will graduate in the spring. Seniors Brien Caseria, Sam Thrutchley, Yuval Rosenthal, Corey Taylor and Max Legere were all celebrated prior to the start of the game.

The first period was a loud one and the Rams seemed to feed off that energy just a little too much. The Rams took a costly penalty just over a minute into the game when defenseman Grayson North was called for hitting from behind. The Rams received a misconduct, North was ejected and the Buffs had a 5-minute power play to start the game.

The Buffs converted on the man advantage, scoring just .54 seconds into the power play. However, the Rams were able to draw two penalties while down a man and killed off the rest of the penalty. CU forward Joe Kinsella added a shorthanded goal with 10:36 remaining in the first, scoring his second of the game and giving the Buffs a 2-0 lead heading into the second.

Second-period action saw the Rams settle into the game and get back into the contest on an effort led by forward Ben Joseph. EPIC was rocking when Rams’ forward Tito Moreno was able to catch a pass from Joseph while on a rush. Moreno shot the puck five-hole, getting the Rams on the board 7 minutes into the second.

“It’s always fun playing in front of (that many) fans,” said senior captain Corey Taylor. “When the crowd gets involved if there’s a big hit or any big play, it’s always good to hear them screaming and (it) help(s) get our energy back.”

CU kindly gifted the Rams a returning major penalty, similar to the one CSU gave them to start the game. CU was called for an elbowing major and the Rams scored to even the game at 2-2. A crazy carom off the boards on a dump-in from defenseman Noah Miller popped out to a wide-open Joseph who netted the tying goal, and set up a winner-takes-all third period.

Rams goaltender Joe Morgan stole the show in the third, making key saves to keep CSU in the game. Despite his efforts, the Buffs outshot CSU 19-6 in the final period.

“I think our season kinda goes out to Joe,” Taylor said. “Joe and Avery (McDonnell) both; goaltending has been our strong suit this year, we go through phases as a team where we play really good and bad, and we rely on them a lot. We wouldn’t have won the games we did this year without them.”

With the game still tied nearing the halfway mark of the third, Ben Joseph worked his magic again—this time finding forward Jonathon Johnson on a rush. Johnson scored on a backhand shot, giving CSU a 3-2 lead, scoring three unanswered goals to come back from a 2-0 deficit. However, the Buffs struck on the powerplay and send the game to overtime for the third time in the season series.

After an exciting four minutes of three-on-three overtime, CSU found a story-book ending from their captain in the dying seconds of OT. Corey Taylor scored off a shot-deflection for Sam Cote with only 5.8 seconds remaining in OT and seal the win for the Rams on senior night.

“I was so tired, I wanted the game to be over,” Taylor said. “Cote made a great play, he drew the defense with him and just shot the puck. I don’t know if it hit me or if it hit (off) him but it was a great play.”

The Ram’s picked up their first win over CU this year and have momentum rolling into their last game of the season. Taylor and the other four seniors will play in their final contest on Thursday when they take on UNLV at EPIC at 8:30 p.m.