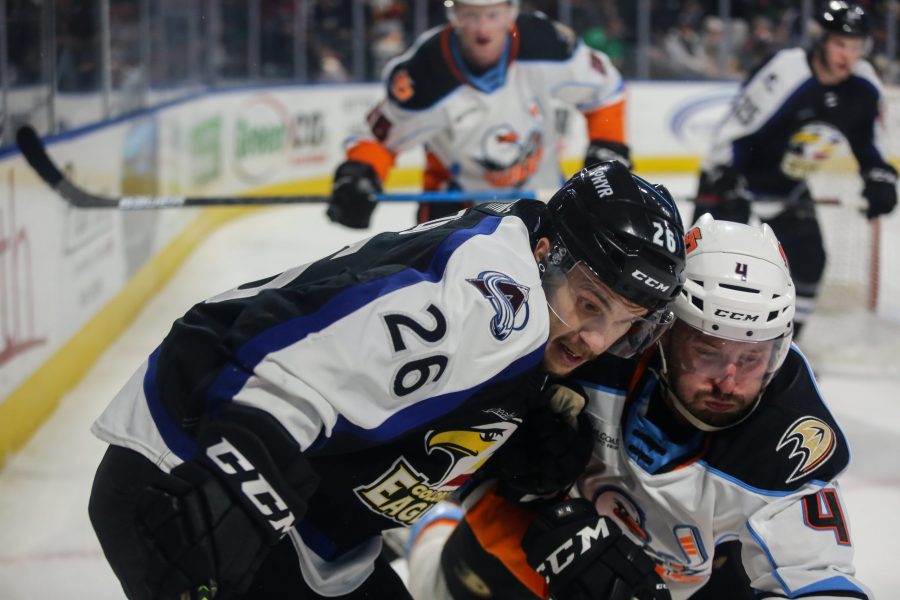 Eagles forward Andrew Agozzino battles for the puck against a San Diego defender during the game Feb. 12 at Budweiser Events Center. The Eagles fell to the Gulls 2-1. (Photo Courtesy of Colorado Eagles)

There was no rest for the wicked as the Eagles returned to action Tuesday night against the San Diego Gulls. Both teams were facing fatigue with the new series marking four games in six days for the Eagles, and the Gulls playing in their eighth game in the past 13 days.

The two-game series marked the fifth meeting of eight on the season for the two clubs, the series split at 2-2. The Eagles looking to repeat their performance the last time the two teams met, which was back on Dec. 18 in which the Eagles captured 11 of 12 points during a home stand, downing the Gulls 4-3.

The Eagles were also without forward Tyson Jost as the forward was called back up to the big club on Monday. They also lost top-six forward Michael Joly to an undisclosed injury, with no say of when he’ll return to the lineup.

“We miss Joly, we miss Jost, we miss Dries and (Greer) so take your pick,” Eagles head coach Greg Cronin said. “Despite that, we played a good, team game. It was an evenly played game.”

The Eagles would again have a rough start to the opening period, allowing two goals for the third-straight game. The Gulls would strike at the 17:24, when forward Chase DeLeo was able to slide the puck past an outstretched Pavel Francouz to give the Gulls a 1-0 lead.

The Eagles would get an opportunity to tie the game on the power play halfway through the opening period. Instead, they would stumble and take two penalties with the man advantage, giving the Gulls a 5-on-3 power play for over a minute. The Gulls would convert on the two-man advantage, taking a 2-0 lead into the dressing room and forcing the Eagles to attempt yet another two-goal comeback.

“Nobody’s trying to start out 2-0,” Cronin said. “The first play is a fumbled puck and it goes down two-on-one. The second play is a five-on-three—and we’ve been good on five-on-three, as seen in the last one we killed at the end.”

Second-period action was back-and-forth and seemed as if it would end scoreless. The Eagles were able to get on the scoreboard with 3:02 left on the clock when forward Andrew Agozzino was able to find defenseman Mason Geertsen wide open with a pass that would find the net and cut the Gulls lead to one goal.

Agozzino continues to be red hot for the Eagles, with six points in the five game season series against the Gulls, and four points in his last three contests at home.

“I have a lot of respect for San Diego. They have a good team, they have great personnel,” Cronin said. “In the third period we had two or three point-blank chances that didn’t go in. And the frustrating part is we take a penalty late in the third, a stupid hooking penalty that cost us a chance to put pressure on them.”

After cutting the lead to one the Eagles would have some momentum heading into the final period of play. Colorado would have multiple chances to knot the game and two, but couldn’t convert on their chances.

“Overall I thought our game was pretty good,” Agozzino said.”We played how we wanted to play, we just didn’t generate enough and we didn’t bury our chances.”

The Gulls were able to establish the forecheck for most of the period, keeping the Eagles in their own end. The Eagles would fall 2-1 to San Diego, unable to complete the two-goal comeback. They will look to improve on their start.

The Eagles have now lost back-to-back games and will return to action Wednesday night when they’ll get another shot at the Gulls. The puck is set to drop at 7:05 p.m.