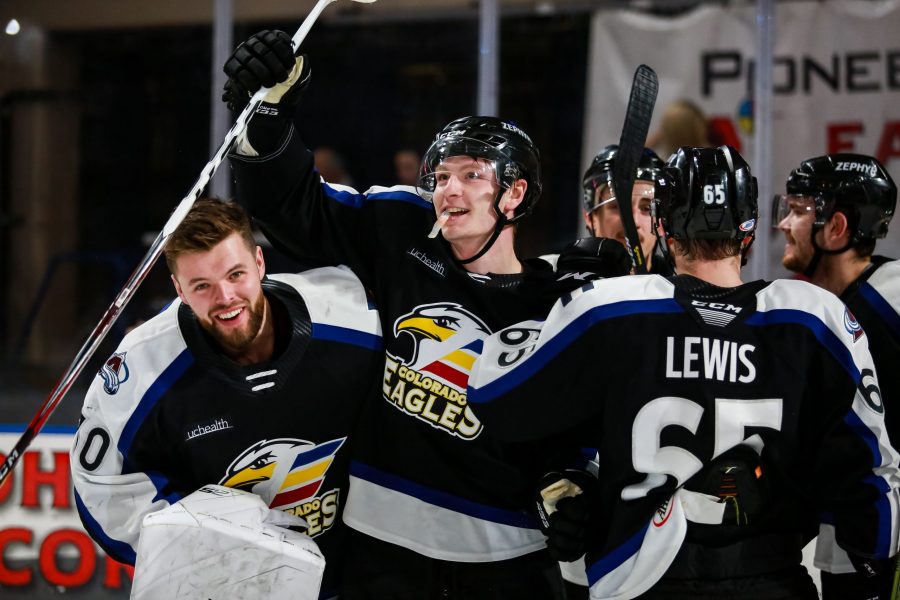 The Colorado Eagles were seeking revenge in a tough mid-week Pacific Division contest against the San Diego Gulls. Entering Wednesday night the Eagles sat four-points behind the Tucson Roadrunner (54 points) for the final playoff spot in the division. Tucson was able to further their lead by securing a point Tuesday night against the division-leading San Jose Barracuda with a 2-1 shootout loss in California.

The Eagles found themselves trying to avoid a three-game slump, having dropped their previous two games at home. Colorado currently has 21 games remaining in the regular season and can’t afford to let any points slip away.

The Gulls took Tuesday’s matchup with a score of 2-1, marking the first time in the season series the road team has won.

In the first period, the Eagles would surrender the first goal of the game, but it wouldn’t be the end. The Gulls would capitalize on a power play chance, scoring with .02 seconds left in the man advantage as Gulls’ forward Corey Tropp would give the visitors a 1-0 lead.

However, the Eagles would flip the script and get one in the last minute of the first period. Eagle’s defenseman Mason Geertsen would fire a point shot that was blocked, but the puck kicked straight across to David Warsofsky who fired a slap shot that was able to find the back of the net, tying the game at one.

“(We got a) huge first goal to give us momentum, getting the crowd into it too,” Meloche said. “They’re a big part of our home games and they were tonight too.”

Heading into the second period of play the Eagles would explode, netting three goals and take a commanding 4-1 lead into the dressing room ahead of the third period. Eagles forward Andrew Agozzino would score twice in the second period and the line of Kaut, Agozzino, and O’Connor would help drive the Eagles offense.

“They’ve been our best line since the beginning of the year,” Meloche said. “They showed it tonight, the used their speed and they made simple plays.

Heading into the third period, the Gulls weren’t ready to call it quits just yet. The Eagles would kill majority of the period with good puck management until the Gulls fought their way back. Gulls’ forward Chase DeLeo would score to cut the lead to 4-2, and just .11 seconds later forward Kiefer Sherwood scored to make it a one-goal game with just 5:43 remaining in regulation.

It looked as if the Eagles would come away with two points in regulation, but it wouldn’t be that easy. Eagles forward Martin Kaut would miss an empty net goal to seal the game with less than a minute remaining. The Gulls would capitalize and score with just 38.5 seconds left in regulation, tying the game at four. San Diego scored three goals in the last 5:50 of regulation on 11 third-period shots to force overtime.

The three-on-three OT was a fast one, with both teams having multiple opportunities to end the game, and it would be the Eagles who would come out victorious. Meloche would fire a five-hole shot on a two-on-one to give the Eagles the 5-4 overtime victory and a much needed extra point in the standings. Meloche had a big game, netting a goal and an assist in the win.

“I had it in my head going into overtime that if I get a two-on-one I’ll maybe fake the shot and go far pad or five-hole,” Meloche said. “I decided to go five-hole and it worked, it’s a huge two points for us.”

The Eagles finished their home stand with a record of 2-2 and will take on the Stockton Heat in Stockton on Feb. 16 and 17. They’re still looking to close in on the fourth and final playoff spot in the Pacific Division.

“We’re going back to Stockton, it’s a huge four points,” Meloche said. “We’re going to take it one game at a time.”