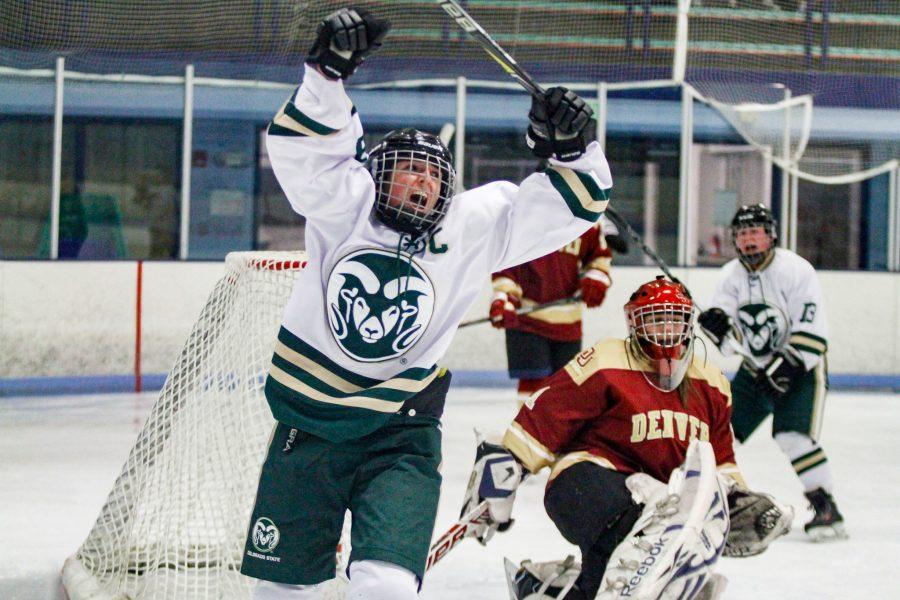 Maria King celebrates after scoring a goal in the game against the University of Denver Feb. 15. The Rams beat the Pios 6-3. (Ashley Potts | Collegian)

The road has been rough for the Colorado State women’s hockey team this season. Their record currently sits at 6-12, with a handful of those losses being double-digit fashion. But that hasn’t stopped the women on the team from doing what they love and taking the ice with confidence each game.

That confidence paid off when it needed to: Senior Night.

The Rams are a very young team—which is something they’ve attributed their struggles to throughout the season—they’re set to lose only two seniors in Alex Reda and Maria King. After acknowledging the two senior’s work with kind words and gifts, the Rams took on the University of Denver for the fifth time this season, the most meetings between the Rams and any team.

The Rams came out strong in the first period. DU scored first and the Rams used it as motivation. Defender Kristen Perry got the scoring started for CSU just over halfway through the period on an unassisted drive. Forward Amanda Seltzer added her own goal four minutes later, assisted by King. After another two minutes, Perry and Seltzer combined for another goal, Perry’s second. The two teamed up for yet another goal 20 seconds before the first intermission—right after an unassisted score from DU’s Brighid Martin—giving Perry an impressive first-period hat trick.

Both team’s defensive efforts stepped up after that, with only three more goals scored through the second and third period combined. DU scored one more about halfway through the second, but would never manage to regain their footing. King and Kallie Clements added their own respective goals to the Rams tally, sealing the deal on an important win.

Multiple Rams recorded multi-point performances in the contest. Perry totaled an impressive six points with her hat trick accompanied by three assists. Seltzer came away with three points with a goal and two assists. King had two points with a goal and an assist. Goaltender Teagan Ries played the full 60 minutes and came up with a number of big saves, though the stats to back it up aren’t up-to-date on the ACHA website.

The Rams will end their season heading to Las Vegas, Nev. for the league tournament. The Rams are promised two games—one against Midland University Feb. 22 and one against Grand Canyon University on Feb. 23.

The Rams are 1-2 against GCU this season and 0-3 against Midland. Midland will be the big challenge for the Rams in Vegas, as two of their previous three losses this season have been those double digits deficits and one ending in a shutout of the Rams entirely.

The team will hope to continue the positive momentum and offensive efforts in Vegas and try to end their season on a high note.