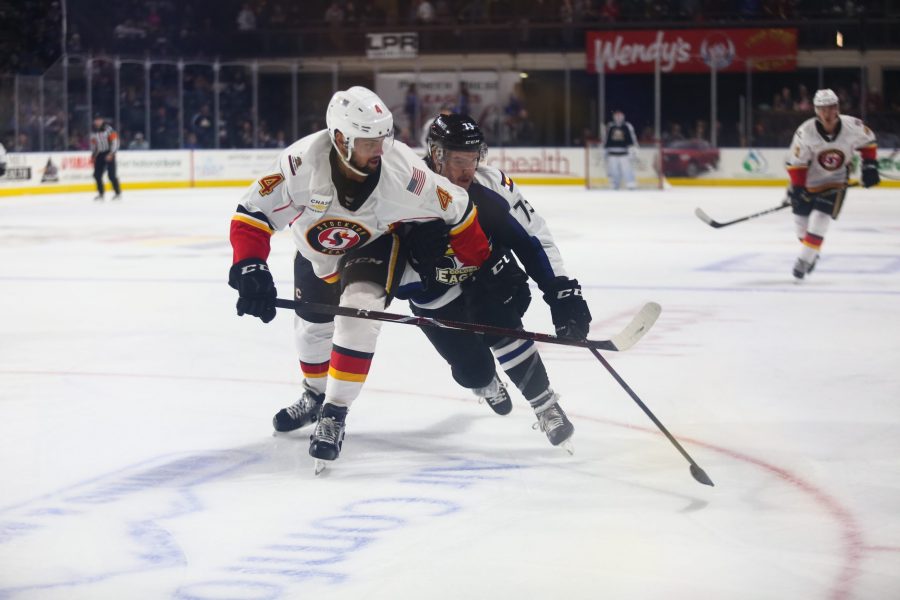 Eagles forward Travis Barron attempts to push past a Stockton defender during the game Nov. 14 at the Budweiser Events Center. (Photo Courtesy of Colorado Eagles)

The Colorado Eagles return to the Budweiser Event Center after a long road trip filled with games against division opponents this weekend. After being on the road for almost a full month, the Eagles are looking forward to getting back on home ice.

“It feels good coming back, after getting two road wins we wanna get those four points back (from Stockton) on home ice,” said Eagles forward Michael Joly. “Our mindset right now is to just keep playing as a team and to keep improving.”

Coming off a weekend in Tucson battling a division foe, the Eagles were able to secure four points in the weekend series while only allowing the Roadrunners one point from an overtime loss on Saturday.

The Eagles won Friday’s contest 3-1 then followed up on Saturday winning 5-4 in OT as Eagles forward Andrew Agozzino was able to beat the Roadrunner netminder with 3.8 seconds remaining in overtime. The team knows it’s important to keep the momentum going this time of year and can’t afford to take any games off before playoffs begin.

“They’re all important now, we talked about this last week in Tucson, this time of year every game is critically important; they’re all divisional points,” Eagles Head Coach Greg Cronin said. “At the end of the day they’re all points, even the games in Chicago or Manitoba, they all count, so we gotta make sure we’re playing playoff hockey the rest of the way.

With a 4-2 record over the trip, now 6-4 in their last 10 games, the Eagles are looking to keep things rolling going into the home-stand this weekend. More division games continue against the Stockton Heat as they make the trip to Northern Colorado.

One x-factor this weekend will be the play of Eagles goaltender Spencer Martin. Martin is coming off backstopping the Eagles to consecutive wins last week, as well as posting a 68-save shutout the week prior.

“Given the role this year I’m not being able to play back-to-back games, last weekend I was able to get in there and get comfortable,” Martin said. “I think that’s been huge for my feel of the game.”

Eagles fans could also see a new face in the lineup as the Colorado Avalanche acquired forward Max McCormick from the Ottawa Senators in exchange for forward J.C. Beaudin.

McCormick, set to report to the Eagles, is a former sixth-round draft pick out of Ohio State University. The gritty two way forward is set to make his debut this weekend and arrived in Colorado today.

“I just got in last night and today was my first day,” McCormick said. “It’s nice just coming in and meeting all the guys, seeing the facilities and getting my first practice in, so it’s been a good first day.”

The Eagles will likely be without forward Tyson Jost who missed last weekend due to injury. Jost last played Jan. 26 against the Ontario Reign. Jost was forced to leave the game after taking a hit from Reign defenseman Kurtis MacDermid and is currently listed as day-to-day with an upper-body ailment.

“It was awesome to get him, a huge boost for us on the California road trip,” Martin said. “You have to take safety first with a player like that and get him healthy before he comes back.”

The Heat will be coming to town with a target on their backs. The last time they were in town they managed to sweep the Eagles on home ice and secure all four points. The Eagles are looking to change the narrative and keep the Heat below them in a tight Pacific Division race.

“We learned from the two losses at home,” Cronin said.”I thought the game that we played in (Stockton) we got demolished and when we came back it was 7-6. We played a fast game the last part of the third period and were able to get back into it. Bottom line is they’re a big physical team and we have to play fast to counterpunch them.”

Puck drop will be at the Budweiser Events Center Friday and Saturday night at 7:05 p.m.