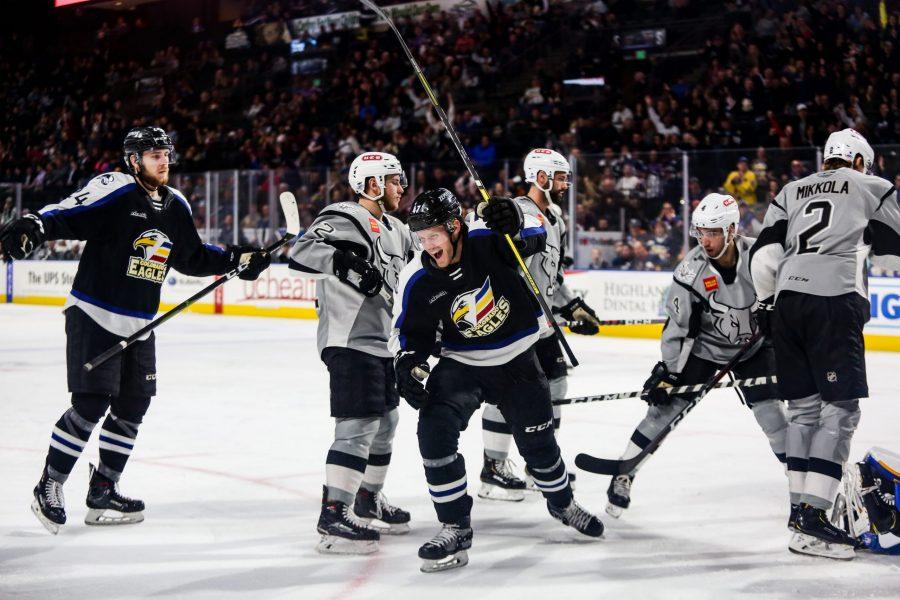 Colorado Eagles forward Dominic Toninato celebrates a goal against the San Antonio Rampage Feb. 26 at the Budweiser Events Center. The Eagles beat the Rampage 5-3. (Photo Courtesy of the Colorado Eagles)

The Colorado Eagles had their work cut out for them as they attempted to sweep the season series against the Rampage Wednesday night.

Penalty troubles have haunted Colorado as of late and it was no different Tuesday, luckily goaltender Pavel Francouz was up to the task stopping 36 of 39 shots faced and making key saves down the stretch to secure the win.

Entering Wednesday’s face-off the Eagles were trying to play more disciplined hockey to help take some of the pressure off their goaltender.

“He’s (been) amazing,” said Eagles forward Max McCormick. “We’ve relied on him the whole year. At a certain point you can’t rely on him (that much), he’s still gonna be amazing night-in and night out, he’s focused and always doing his job but we have to help him out.”

Similar to the night before, the first period of play would start off slow and would be a tight-checking battle with both teams trying to impose their will. The only marks on the score sheet would be two penalties, one for each club.

“We were trying to have a game like we did in the second period we had last night, trying to put it together for 60 minutes. we did a pretty good job of that, I thought our pressure was a lot better and we defended very well, (which) led to a lot of offense for us.” – Andrew Agozzino

Colorado would be unable to capitalize on the power play and time would wind down until the final minutes of the first period. Forward AJ Greer would lay a bone-crushing hit on Rampage forward Jordan Kyrou, but would get called for a hooking minor. Colorado would kill the majority of the penalty and head to the second period with no goals on the board.

“It’s something we’ve talked about, and (we’ve) been focusing on lately,” McCormick said. “(We) need to continue to work on staying out of the box.”

In the second period, the Eagles would replicate the previous night’s’ second period and build a substantial lead heading into the final period of play.

Almost halfway through the second period, the Eagles would break the tie with a goal from forward Andrew Agozzino. The forward would take a quick outlet pass from linemate Logan O’Connor, creating a 2-on-1 chance for Colorado. Agozzino would fire a howler that found the twine for his second goal in as many games.

From there the Rampage would make a push, but Colorado was able to weather the storm. San Antonio had two chances, both with a wide-open Eagles’ net, but were unable to convert. Colorado would get a power play with under 4 minutes remaining and would only need 12 seconds to convert on the man advantage for a 2-0 lead. Eagles’ captain Mark Alt would connect with David Warsofsky on a one-timer to stretch the lead to two goals.

Colorado wouldn’t stop there, Agozzino would win a footrace for a loose puck, and fire a quick shot that found the back of the net for his second tally of the game with just 1:06 remaining in the period.

“We were trying to have a game like we did in the second period we had last night,” Agozzino said. “Trying to put it together for 60 minutes. We did a pretty good job of that, I thought our pressure was a lot better and we defended very well, which led to a lot of offense for us.”

Capping off another strong second period, the Eagles would head into the third with a solid 3-0 lead, and try to finish off San Antonio. Fans brought the noise to start the final period of play and the Eagles fed off of it.

After defenseman Nicolas Meloche took a tripping penalty early in the period the Eagles were able to regroup and find their game.

Around the 10 minute mark of the third, forward Scott Kosmachuk would toe-drag to get past a Rampage defenseman for an open lane to the net. Kosmachuk would get stuffed by the goaltender, but Greer would find the rebound and put the Eagles up 4-0. To cap off a solid night for the Eagles Agozzino would add another power-play goal to complete the hat-trick and four-point night.

“I just tried to come out with the mentality to shoot the puck,” Agozzino said. “(There were ) some good plays by my linemates and we had some good opportunities. When you’re shooting the puck with volume a lot of them are gonna go in so that was my mindset coming in.”

From there Dominic Toninato would add another goal to seal a 6-0 win, with another great game from Francouz. However, the Rampage weren’t going to walk away empty-handed as a line brawl broke out in the last 30 seconds of regulation.

Francouz left his crease when Rampage goalie Ville Husso started to grab hold of Eagles’ players. Francouz would skate the length of the ice before shoving Husso from behind, and knocking him down: the crowd erupted.

Francouz has been solid the whole year and when he’s between the pipes the team’s confidence picks up.

“(He’s) rock solid. (Francouz has) been our best player all season long,” Agozzino said. “He’s really solidified himself as one of the best goalies in the (AHL). It’s easy to play in front of him, because if you make a mistake he’s right there, and we have a lot of confidence in him.”

Francouz posted a 26-save shutout to help give the Eagles their second straight win and bring them to a tie with Tucson for the final playoff spot in the division. The Eagles will host the Roadrunners this weekend, trying to move ahead and claim their spot in the postseason.

“(We’ve) gotta have the same effort that we did these two games,” Agozzino said. “We gotta be desperate, we only have four games against Tucson and they’re all important games. It’s gonna be a playoff atmosphere, the fans are gonna be into it, we’re gonna be ready to go.”

The Eagles will have two days to rest before taking on Tucson Saturday and Sunday. Puck drop is set for 7:05 p.m. on Saturday.