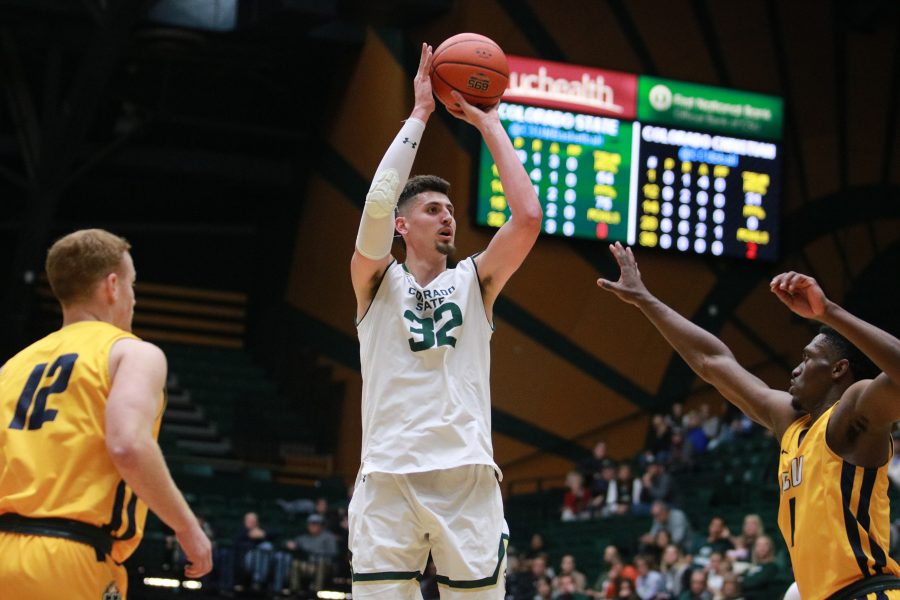 The last Colorado State win prior to Tuesday night was exactly one-month preceding, a close-knit victory over Sam Houston State at Moby Arena.

In their latest contest back at Moby and their first home game of the conference season, the Rams ended their five-game losing streak, besting Air Force, 87-64.

The win for the Rams over the Falcons was their 10th in the two teams’ last 11 meetings at Moby, with the all-time record moving to 79-33 in favor of the Rams. The loss for the Falcons brought their latest losing spree to three.

Heading the win for Niko Medved’s squad was the two-headed combination of Kendle Moore and Nico Carvacho as the pair accounted for 50 of the Rams’ 87 total points.

The duo gave the Rams a jolt early in the game, with Moore accounting for nine of the Rams’ first 14 points, tallying 15 of his 23 points in the first half alone. With double-double efforts in seven of his last eight, Carvacho continued his run as well, flowing with Moore in the pick and roll often, leading to 12 first-half points of his own.

“Coach just told me to keep embracing my role and let (the game) slow down,” Moore said.

With the two heading both the front and backcourt efforts, the Rams ran out to a 44-32 lead at the half. The lead was garnered mostly during a near-10-minute stretch in which the offense made 10-of-12, including sprees of 4-of-4 and 5-of-5 respectively.

Prior to their efficiency spike, the Rams were down 8-6 with the offense struggling to find their footing, a start that included 1-of-5 from outside to open the contest.

“I think we came out just wanting to play defense,” Carvacho said. “I think we did a very good job of playing defense… they run a really complicated offense, so that was a good thing.”

Out of the break, it was Carvacho ramping up his efforts, once again fronting the Rams’ scoring efforts. Of the teams’ first 10 points, the big man accounted for six on a perfect 3-of-3 mark from the field.

Various runs for the Rams came despite the loss of starting guard Anothny Masinton-Bonner. Bonner was consigned to street clothes following a tweaked ankle at the 14:19 mark of the first half.

“Whenever you play Air Force, they’re gonna test you in a lot of ways,” Medved said. “Guys came out with a great mindset tonight I thought on both ends of the floor, really got some energy going.”

In his stead, Moore once again stepped up to put the game out of reach midway through the final period. After a layup to force a Falcons’ timeout, Moore garnered a steal, executing a one-man fast break en route to another layup and a 62-44 lead with 12:56 remaining.

The pair of buckets at the rim served as the knockout blow for the Rams as the hosts led for the game’s remainder, pushing their margin to 25 at one point.

Carvacho, the nation’s leading rebounder entering the contest, fell one board short another double-double (27 points, nine rebounds). The forward had posted a double-digit effort in both points and rebounds in each of the Rams’ first two conference games.

“I took one year to watch (conference play) and two years to play it,” Carvacho said. “It’s my third year so I’m more and more comfortable going into every single game and I know every single game what it’s going to take to pull out (the win).”

Moore and Carvacho’s efforts, combined with a double-digit scoring tally from both J.D. Paige and Kris Martin buoyed the teams’ 35-of-62 mark from the field (56.5 percent), their second-highest single-game percentage of the year.

The Rams will now enjoy a three-day hiatus before welcoming in New Mexico on Saturday. Tip-off is set for 2 p.m. against the conference’s second-ranked squad, led by senior guard Anthony Mathis.