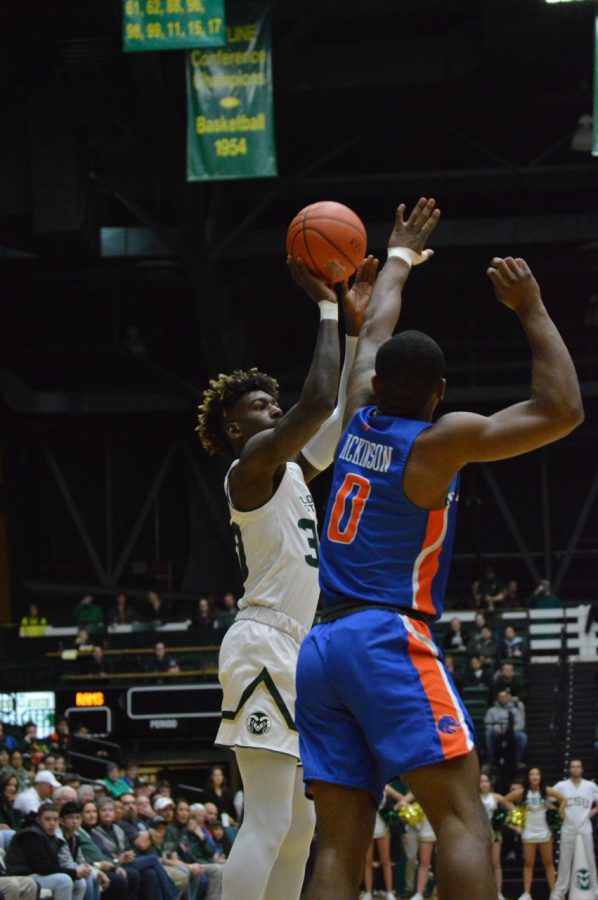 The predominant factor Niko Medved has looked for from Colorado State men’s basketball this year has been consistency.

After their upset win over Fresno State, the Rams fell flat against Boise State, 70-68, failing to replicate their results and take another step toward the persistence that’s preached by Medved.

With the loss, the Rams’ continued a losing skid against the Broncos that dates back to the Rams second-round win in the 2016 Mountain West tournament.

The first half was the start to the evasion of Medved’s goal.

After sprinting out to a 16-6 lead, things began to spiral for the hosts. The cause, in opposition to their results against Fresno, was the Ram’s defense.

“(We made) defensive mistakes,” Nico Carvacho said. “We weren’t defensively sound, we weren’t talking a lot. We got mixed up a bunch on cross screens and down screens and dribble handoffs and didn’t switch like we were supposed to.”

Medved’s squad allowed the Broncos to sink 10-of-11 attempts, aiding the visitors’ 12-2 run to reclaim the lead from the Rams. Leading the charge was last year’s Mountain West Sixth Man of the Year, Alex Hobbs.

After a pair of contested layups, Hobbs sank a 3-pointer to bring the Broncos within three. A subsequent 3-pointer from the team’s leading scorer, Justinian Jessup, knotted the game up at 24 apiece.

Further extinguishing the Rams hot start was a switch to a zone defense from the Broncos after a singular media timeout, a change that gave the offense trouble.

“I don’t think we did as good of a job as we have in the past of sharing the ball,” Kris Martin said. “We were real stagnant at the beginning of their zone.”

Hobbs and Marcus Dickinson packed on four more points for the Broncos before Hyron Edwards brought an end to their reign.

With the ball skipping across the court, Edwards lept out of bounds, tossing the ball behind his back to Kris Martin for the steal. The forced turnover allowed Nico Carvacho to convert at the rim on the other end, bringing the Rams within two.

A subsequent Edwards layup on a fast break brought the teams even at 30 apiece before the Broncos finished the half on a 5-0 run to take a five-point lead into the intermission.

The Broncos’ mid-half spree brought their field goal percentage up to 56 in the first 20 minutes, besting the Rams mark of 44.8 by a wide margin.

Out of the break, the consistency for the Rams was once again on the opposite spectrum of Medved’s desires.

After starting out energized, the Rams went on a nearly five-minute scoring drought early in the second half. The scoring deficit allowed the Broncos to once again go on a run, this time an 11-2 spree.

Plaguing the Rams on offense was a bevy of wayward open shots.

“We had a lot of wide-open looks,” Medved said. “(It was) one of those games where we were going to have to win on the defensive end. You look at the numbers and that wasn’t the case.”

In another run of hot shooting, the Broncos sank 7-of-9 to bring their second-half tally to 69.2 percent with nine minutes left in the half. Jessup led the way for the Broncos charge with 11 points in 10:21 after scoring only eight in the game’s opening frame.

The addition to Jessup’s total, he secured his 14th double-digit performance in the team’s first 21 games.

“We just were not very physical getting through screens,” Medved said. “(Jessup) made a couple of tough ones early … there were just a couple late shot clock (makes) where we didn’t have a hand up and we let them shoot. He didn’t really feel us tonight.”

Among their attempts to find their footing, the Rams continued to suffer from ill-timed miscues. Whether it was a defensive or offensive lapse, the Broncos maintained the lead for the second half’s entirety. The full stanza brought their stint with the lead to 23:44 in the contest.

The team’s missteps notwithstanding, Carvacho finished with his 13th double-double of the year while tacking on six assists on to his final line. With 16 boards, Carvacho also passed Rams’ former center and current Assistant Coach Pierce Hornung to become third on the program’s career rebound list.

Three other Rams scored in double figures in the contest, while four respective Broncos also eclipsed the decade mark. The visitors were led by a game-high 20 points from Jessup.

After a split homestand, the Rams will head down I-25 to the Air Force Academy for a Saturday matinee bout. Tip-off against the Cadets is set for 2 p.m.