Rams beat Bulldogs amongst changing of the guard in backcourt 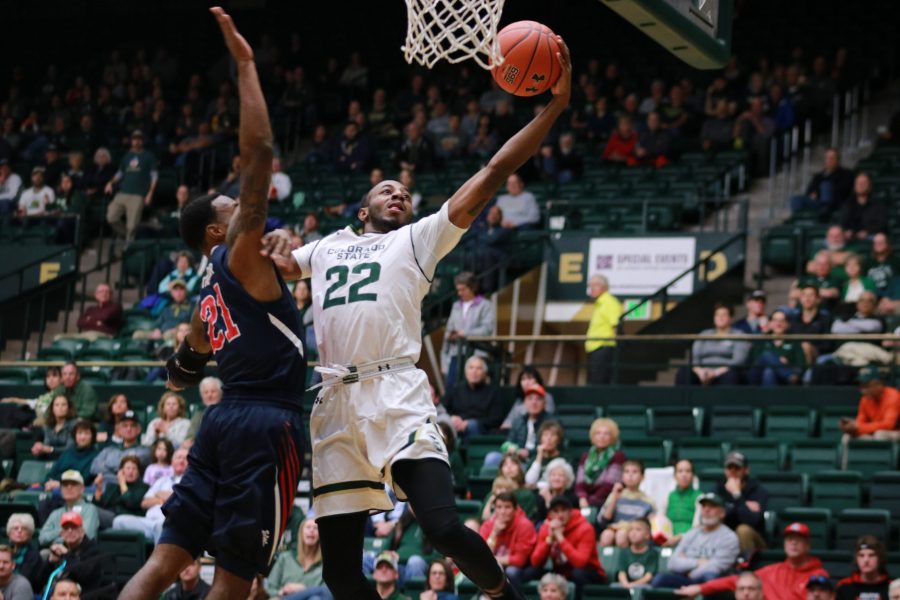 J.D Paige (22) breaks past a defender for a layup, as the Rams battle the Fresno State Bulldogs. CSU won 74-65 (Devin Cornelius | Collegian)

In J.D. Paige’s final year as a Colorado State Ram, a proverbial passing of the torch has ensued. With freshman Kendle Moore and Paige leading the team on Saturday, the transformation was once again in the limelight against Fresno State.

The duo scored 22 of the team’s first 26 points including all of their first 16 en route to a Rams’ upset win over the visiting Bulldogs, 74-65.

Along with bringing their guards into focus, the win also knotted the two teams at 18 wins apiece in their 36 all-time meetings.

Of their early-game heroics, Moore delivered the first blow:

Kendle Moore with CSU's first points of the game pic.twitter.com/h5b3HsnOBY

Followed by a 3-pointer from Paige as the two alternated buckets:

Unfortunately for the pair, their efforts were largely undone by Fresno State’s Deshon Taylor early.

Typically overshadowed in the scoring department by teammate Braxton Huggins (18.5), Taylor averaged 16.1 points per game entering the contest. He nearly supplanted his mark with 15 points in the first half alone against the Rams.

Outside of Taylor, the Rams held the Bulldogs to 15 points on 7-of-24 from the field. The mark included 0-of-7 outside except a trio of 3-pointers from Taylor.

“I thought our guys played really good defense,” said Head Coach Niko Medved. “For the most part, we made them earn everything for 40 minutes.”

While the Rams held Huggins to only two points in the first half, the Bulldogs held CSU’s own leading scorer, Nico Carvacho, to only a pair as well. Carvacho was still able to contribute six boards en route to the team’s 33-30 lead at the half.

The lead, though only three points, was subtracted from by a Medved technical foul with 1.5 seconds left in the half. The frustration from Medved was something that he attributes to a bevy of emotions during games.

“I think you gotta be emotional all the time, you gotta have an edge about ya,” Medved said. “I’ve got a smile but I’ve got an intensity too. I love to win… Sometimes things get emotional and you’ve got to say what you think you need to say.”

Out of the break, the Rams’ intensity continued with their defense holding the Bulldogs without a point for the second half’s first 5:32. The lack of scoring enabled a 13-0 run by the Rams, expanding their margin to 16.

“We knew that this is a good team, you gotta play for 40 minutes against them,” Medved said. “They’ve been down before and came back. I really like the way we came out of the locker room and had a really good mentality.”

While their efforts buoyed by breakouts from both Moore and Paige in the opening 20 minutes, the Rams’ attack was based on a more communal effort in the latter half.

In the second half, four separate Rams racked up multiple makes including a pair of 3-pointers from Anthony Masinton-Bonner late to ignite the Moby Arena faithful.

With a lead in hand for 28 of the game’s first 30 minutes, the Bulldogs began to garner a comeback behind Taylor’s efforts.

Much of the shrinking deficit was due to a lack of success at the free throw line for Medved’s squad.

“There for a while, their free throw defense was pretty good,” Medved said jokingly. “Basketball is so crazy the way that it goes. Sometimes missed free throws become contagious.”

The 56.3-percent mark from the line was a tie for the fourth-worst single-game mark of the year for the hosts.

Their struggles at the foul line notwithstanding, the team maintained the lead for 36:32 of game time, relinquishing it only once in the matchup, though they allowed the Bulldogs within six late in the game.

The win, though likely the biggest of Medved’s tenure thus far, was merely a sign of things to come for the team’s leader.

“We expect nothing less than to play like this every time,” Paige said.

Paige and Moore combined to score 33 in the game, with Kris Martin pitching in 11 of his own. Carvacho finished a point shy of his 13th double-double (9 points, 14 rebounds) despite his diminished impact early.

Sealing the game with a contested and-one with under a minute left was Moore once again:

“I don’t really go by (the freshman role),” Moore said. “I just go by being a basketball player and doing what I gotta do on the court.”

Following their win over the visiting Bulldogs, the Rams will ready themselves for a Tuesday night home bout against Boise State. Tip-off for their first meeting with the Broncos is set for 7 p.m.