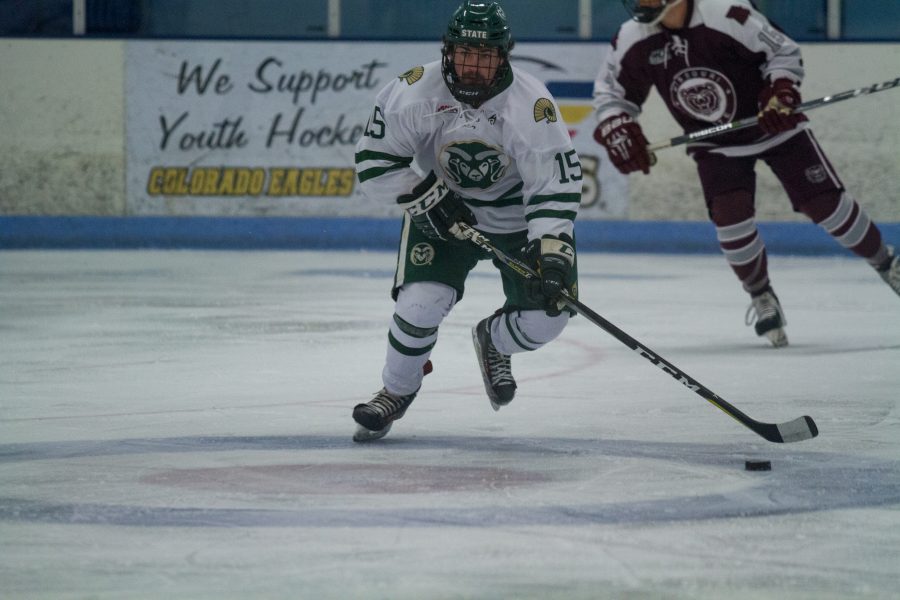 Forward Liam Millar moves the puck down the ice during the game against Missouri State on Saturday, Jan. 20. During the game, CSU scored only one goal, losing 5-1. (Josh Schroeder | Collegian)

At the Edora Pool Ice Center in Fort Collins on Saturday night, the Rams are five minutes into the opening period of a game against the University of Arkansas . It’s a power play opportunity for the Rams as they work the puck around the circles looking for a shooting lane.

Sophomore forward Liam Millar is planted in front of the Razorback net; he’s listed at 5 feet 7 inches and 150 pounds, so this is not the ideal place for a small forward. He presents his stick for a deflection, a shot finds its way through a sea of bodies, the puck ramps off Millar’s stick and clanks off the left post.

Millar would go on to draw two penalties and create numerous scoring chances for the Rams, who would fall 3-2 to the Razorbacks. While the Rams have struggled this year, Millar’s consistent play has been a silver lining of sorts for the team.

Millar is the smallest of the Ram forwards, but what he lacks in physical size he makes up for with heart and intensity.

“He isn’t intimidated by anyone when he’s out there and he’ll go after anyone regardless of how much bigger they are,” said Mark Schermerhorn of Colorado State University Hockey Operations. “‘Tenacious’ and ‘hard-nosed’ are definitely words that come to mind when you watch him play.”

Growing up in Durango, Colorado and getting his first pair of skates at age three, it didn’t take long for hockey to become a passion.

“My dad bought me my first pair of skates and it just kinda went from there,” Millar said. “I played all my youth hockey in Durango, then high school hockey too. Junior year I left to go play junior hockey in El Paso and Bozeman before I came here to CSU.”

Although now revered for his toughness, playing fearless to compete against bigger opponents is something Millar had to learn.

“That’s not necessarily the way I was taught to play but how I figured I needed to play, being an undersized player,” Millar said. “I’ve got to stick up for myself and prove something.”

Millar—listed as the smallest player on the Rams’ roster—is currently second on the team with 56 penalty minutes and has recorded two points in 17 contests.

For the Rams, high-end offensive production has been hard to come by this season, but Millar prides himself on finding other ways to help contribute to the team.

Currently, on both the team’s top power play and penalty killing units, Millar has demonstrated he can contribute in all facets of the game with his pesky style of play.

”If you look at the stat sheet you can see I’m not a huge point guy,” Millar said. “I’m more of a playmaker and I try to do the little things right, (it) sends a good example to the younger guys on the team: just get in and get your job done.”

Blocking shots, making hits, and going to tough areas of the ice to retrieve pucks are just a few ways Millar is able to help the team stay in games.

Off the ice, Millar is well mannered and much more relaxed. Millar studies environmental horticulture, focusing on turf grass, with the hopes of one day becoming a superintendent of a golf course.

With most of his time committed to academics and the hockey team, Millar doesn’t have much downtime, but when he does, he likes to pass time by skiing, golfing and fly fishing.

“I do a little bit with our fly fishing club here; I like to fly fish and I love to ski when I can find the time,” Millar said. “You know, typical Colorado activities.”

With a crop of seniors about to graduate, the sophomore should see his role elevated as an upperclassman next season.

“We have some strong leadership in this senior class that has done an outstanding job for this program and Liam is definitely one of the guys next year that will help lead this team,” said Assistant Coach Jameson Wicks.